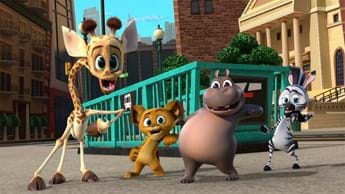 Kids learn best through laughter, and DStv is sending them to school with a packed selection of treats this week.

M-Net’s (DStv channel 101) Saturday movie Dolphin Island is a must-watch for animal-loving kids who’d love a wild BFF. Awesome experiences with kids and business are under the spotlight in The Dream Job.

And the Slime Time Marathon on Friday, 16 August on NickToons (DStv channel 308) is going to be slime-tastic!

Three company bosses bring a group of kids into their business for a week to allow them to experience adult work first-hand and explore careers beyond the normal ones they see in the media or learn about at school.

Teen orphan Annabel lives with her grandfather on an island, surrounded by love and friendship – and she even has a dolphin pal. But then another side of the family decides to seek custody of her.

Danger Force and Captain Man get hooked making celebrity ‘Holla’ videos. But when it becomes a popularity contest, they accidentally reveal their secret identities.

The early years of the Madagascar heroes, Alex the Lion, Marty the Zebra, Melman the Giraffe and Gloria the Hippo, as they grow up in a rescue habitat at the Central Park Zoo. With the voices of Shaylin Becton, Tucker Chandler and Luke Lowe.

Watch from Friday, 13 August on Showmax

Did someone say tricks and messy challenges? For one day only, we've got a stack of programmes full of them. And there will be loads of slime, too!