ESPN takes you inside basketball’s WNBA bubble in “144” this Women’s Day. 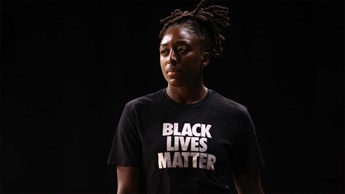 In 2020, 144 players from across 12 of the WNBA’s (Women's National Basketball Association) teams went into quarantine together in what would come to be known as The Wubble. Between July to October 2020, they played 147 games together, entertaining fans around the world.

But aside from the pressure of a relentless schedule, the worry of daily COVID testing and being apart from all their normal support systems, they also took on the additional role of campaigning for social justice in the US. The WNBA dedicated their season to the memory of police violence victim Breonna Taylor, and to the Say Her Name campaign, fighting for justice for black female victims of police brutality and racial violence.

This Women’s Day on Monday, 9 August, sports channel ESPN (DStv channel 218) airs the documentary 144, which takes us behind the scenes at The Wubble. Executive Producer and WNBA player Chiney Ogwumike says, “144 amplifies the story of how our league helped create unprecedented social change while redefining how we see strong female athletes compete at the highest level. It is a privilege to showcase the 144, their dedication to social impact, and their strength in navigating through 1 of the most challenging seasons we have ever had.”

The film opens with what looks like the setup for a fun drinking game, a table filled with disposable plastic cups. Moments later, though, it becomes clear that this isn’t a party. It’s 26 August, 2020 (Women’s Equality Day in the US) and the players in The Wubble, many of whom are wearing Black Lives Matter and Say Her Name jumpers, are holding a candlelight vigil as they pause to reflect on everything that they’re fighting for.

Later, the on-screen images of solidarity that saw the teams cancelling three sets of games mid-season and kneeling in protest together following the 23 August police shooting of unarmed black man Jacob Blake that became iconic.

144 takes us behind that picture, into the backroom to show how the teams weighed up their real need for financial security against their determination to protest, and how they combined their ideas to create an effective statement.

144 also digs into the psychological effects of an unending assault of news showing black people as the victims of violent systemic racism. As player Jewell Loyd says, “There’s never an off day of being black. Every day, you’re always reminded by something small or something big, and so how you react to that is either you educate or be silent.” And it highlights the cost of activism, as we see the players’ painful conversations with black families who’d lost female members to police violence.

That activism doesn’t go unchallenged. But when one team owner tries to ban players from wearing their Breonna Taylor support jerseys, claiming that it’ll alienate viewership, we see the players’ response.

Aside from the grit, sweat and tears on and off the court, 144 explores daily life in The Wubble. The final third of the documentary takes us inside the sharp joys and pains of the final games of the season. Here, ESPN has the advantage of their own footage of the teams’ incredible on-court action throughout the game season, along with all the statistics tracing players’ progress, as viewers saw it on TV.

144, in the end, stands as a memorial to one of the most unusual seasons of WNBA basketball, and a playbook for how to create an effective protest.