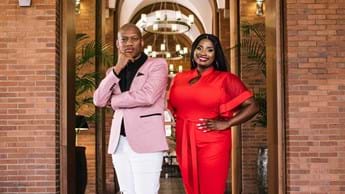 DStv is packed with delicious local content and the best of the African continent this week.

See popular TV host Proverb in a different light when he reveals his business savvy side in The Property Game. Spiritualist Thembi Nyathi is back with more guidance in a new season of Dloz’Lami. If you’re looking to fix your love, presenter Andile Gaelesiwe returns in Uthando Noxolo. And with your spirit and heart in check, you can take care of your body, too, with help from professionals in Real Health S13. Then it’s time for a grand adventure in Africa And I.

It’s set to be an exciting week in local telenovela Isono, too…

Property investment entrepreneur Silvia Milosevic and Idols SA producer, judge and host Tebogo “Proverb” Thekisho discuss their journeys from acquiring property to turning it into a money-making asset, and talk about all their trials and tribulations.

Hosted by Thembi Nyathi, this reality show offers spiritual guidance to participants who are facing difficulties in their lives. Starting off in S3, we have Knoxx and his wife, who have lost all their money and need a helping hand.

In this reality show, TV personality Andile Gaelesiwe helps people to mend their broken relationships and forgive those who’ve wronged them. In the new season, we meet new participants who need a nudge to break the pain cycle.

Meet Zolati Othmane, the 23-year-old Moroccan man who hitchhiked, cycled and skated across Africa non-stop for 3 years. With just $30 and a small backpack, he left his hometown in Morocco, and has since visited 22 countries. This is his story.

Watch from Thursday, 5 Aug on Showmax

Abednego's win looks to be short-lived when Diedricks starts asking questions. Mary gives Zakwe 1 last chance to redeem himself, getting a replacement dealer into the prison isn't as easy as Gabriel had hoped, and Simon must choose between Noluthando and Millicent.

The talented boeremusiek artists Kosie Beukes and Die Ventertjies entertain viewers with special musical performances of their biggest songs that were filmed during lockdown.

A road trip is the perfect setting for discovery in this South African drama. A young man attempts to fulfil his father’s dying wishes while travelling on the road to Cape Town. Starring Ivan Botha and Donnalee Roberts.