SuperSport’s coverage of the Games will include eight 24-hour channels and a heavyweight crew of experts. 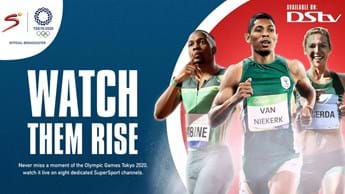 A heavyweight crew of experts will front up SuperSport’s extensive coverage of the Olympic Games, starting in Tokyo this week.

Between them the former athletes have 11 Olympic medals and a wealth of experience ranging from every Olympic Games since South Africa’s readmission in 1992.

They are Penny Heyns, Ryk Neethling, Lyndon Ferns and Marianne Kriel (swimming), Elana Meyer, Khotso Mokoena and Hezekiel Sepeng (athletics), Pietie Norval (tennis) and Ramon Di Clemente (rowing), who have all stood on the Olympic podium.Grandstand the go-to channelApart from the multi-channel offering on SuperSport, the Grandstand channel will be the gateway to the very best content that Tokyo has to offer.

The Grandstand feed will focus on the most important events on the go, but also cross-promote other events to assist viewers navigate the Olympics. And should Grandstand switch from one venue to the other, it will advise where viewers can continue to watch the original event.

Apart from the live action, SuperSport’s coverage will include daily Olympic segments on SuperSport Blitz, athlete interviews, plus detailed wraps, features, profiles, historic content and scene-setters. There will also be repeats and highlights, plus a daily Olympic catch-up show from 7-8pm daily.

Every medal event will be broadcast live on the World of Champions.

Coverage of the Games will include eight 24-hour channels on DStv, with the traditional football and variety channels hosting multiple broadcast feeds from Japan, enabling the Olympics to feature on all DStv packages. Existing genre channels will also host Olympic programming.

The DStv app and website will include four additional streaming channels featuring even more live Olympic content. The offering is available to Premium subscribers.

Showmax will carry all these events making it an easy platform on which users can access what interests them. While only Showmax Pro subscribers will have access to live streams of every available event, all Showmax subscribers will be able to stream exclusive Olympics coverage including talk shows, highlights, and documentaries.

DStv can be accessed online at dstv.com or through the DStv app for Android or iOS. The app is free to download on the Google Play Store or Apple App Store. Live channels and DStv Catch Up content are available to all DStv Premium customers and data costs will apply when streaming and downloading content.