Great British TV, from Bake Off to Intelligence S2, on DStv this winter. 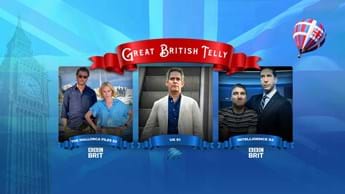 To beat the chill this winter, the BBC channels will be bringing a little local sizzle into the mix every Wednesday at 20:00.

Plus even more to be seen on DStv’s premiere channel, M-Net (DStv channel 101) and streaming service Showmax.

4-Episode comedy based on David Nicholls’ 2014 novel of the same name. When Douglas’s (Tom Hollander) wife Connie (Saskia Reeves) wants a divorce, he suggests that they take a last trip to Europe with their son.

When this UK-US spy agency comedy returns, American spy Jerry (David Schwimmer) finds out that the Russians have gotten hold of a cyber weapon that Jerry himself helped to develop, threatening national security.

Historical fiction based on writer Bernard Cornwell’s The Saxon Stories (2004-2020). S4 is set in the years 901-912 and will include Wales, Mercia and Wessex’s united efforts to defeat the Danes at the battle of Tettenhall.

Rise of The Clans S1

Neil Oliver (of Coast Australia) presents this 3-part dramatisation of Scotland’s 17th-century civil war between the Scottish Parliament, led by the chief of Clan Campbell, and those clans loyal to King Charles I.

This series is inspired by fantasy author Sir Terry Pratchett’s Guards characters in the Discworld novels (1983-2015). Cross-species guardsmen led by Sam Vimes (Richard Dormer) rise out of apathy to restore order(ish) to Ankh-Morpork.

Joel Dommett hosts while judges Jonathan Ross, Davina McCall, Mo Gilligan and Oti Mabuse try to guess who the celebrity dancer is beneath an extravagant costume that hides their identity.

10 Pairs of competitors take on themed challenges to be named UK’s Top Dog Stylist. Each week their models strut on the dogwalk, as their owners see their fur baby’s new look. Hosted by actress Sheridan Smith.

The Great Kenyan Bake Off S1

Crafty Kirstie Allsopp pits 2 celebrities, like Property presenters Lucy Alexander and Martin Roberts, against each other to see who does best as they try creative hobbies from pyrography to quilling, woodwork to cake decorating.

Funny man Michael McIntyre hosts this game show in which 7 celebrities help contestants to answer questions on their way to win a fortune. A spin of The Wheel decides the celebrity helper.

Binge your British faves on Showmax

The Lord of The Rings trilogy is on the way on Thursday, 29 July! And you can already watch The Hobbit trilogy: An Unexpected Journey, The Desolation of Smaug, and The Battle of the Five Armies.

If romantic drama movies are more your style, Showmax is bringing in After We Collided on Monday, 12 July. It’s a sequel to After, which is available to stream already.

On the series side, Showmax has gotten its hands on these big hits:

The Best Of British on Showmax

Stay connected to DStv to feel every moment of British entertainment this winter.