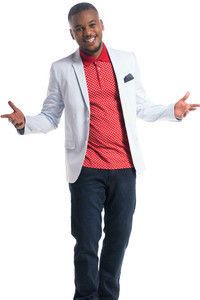 Well-known television personality Lungile Radu was born in Soweto and is the co-host of The Voice South Africa, M-Net’s local version of the immensely popular international vocal talent search, for the second season.

Lungile's extensive experience in front of the camera stands him in good stead in this demanding role. On top of handling the pressures of a live reality show, he will manage all the emotions in the wings – from buoying contestants’ nervous families and friends to giving the singers much-needed support in the later rounds of the show.

A slick, highly professional presenter, The Voice SA also highlights Lungile's warm and caring personality. Working in the television industry since 1998, Lungile Radu is best known for being a Channel O VJ for eight years, as well as hosting both seasons of Big Brother Mzansi.

He also has his own reality show on M-Net sister channel VUZU titled Forever Young and is the host of Mzansi Footballers on Mzansi Magic.