“Skin as white as snow, lips as red as blood, and hair as black as ebony,” – the immemorial line that described the young princess who was "fairer than them all". A German fairy tale popularised by the Brothers Grimm, it followed the story of a sweet young princess and her vain and jealous stepmother.

Like many of the Grimms’ fairy tales, it’s had multiple incarnations on stage and screen. This week’s Sunday night movie, The Huntsman: Winter’s War, forms part of the canon, so with that in mind, we’re taking a closer look at the movie and four other productions featuring the legendary princess.

With seven quirkily named dwarfs and a host of songs which would become Disney classics, it was the studio’s first animated feature film. At the Academy Awards in 1939, Walt Disney (the man, not the studio) received an honorary Oscar for the film in the form of a full-sized statuette plus seven smaller ones. Check it out below.

Disney’s Snow White was sweet and doting, but the princess featured in this film was way tougher. Cast as the princess was Kristen Stewart, at the height of her Twilight fame; but it’s our very own Charlize Theron who steals the show as the fearsome, evil stepmother, Queen Ravenna. The other title character, the huntsman, is played by Chris Hemsworth, swapping Thor’s hammer for an axe, while some of Britain’s finest assemble to play the dwarfs.

Four years later a sequel was released, which focused more on Ravenna. With Theron delivering such a magnetic performance in the first film, it’s easy to understand why. It also notched things up a bit and went all fairy-tale-crossover by introducing Hans Christian Andersen’s Snow Queen, played by Emily Blunt. 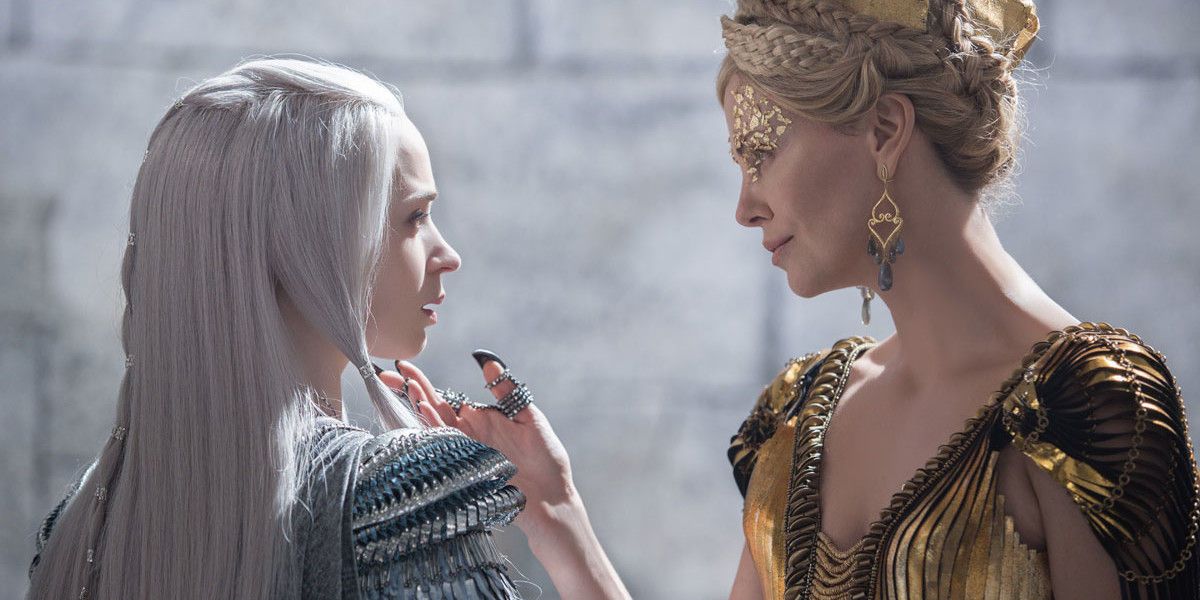 In the same year Snow White and the Huntsman was released, this Snow White adaptation with Lily Collins as the princess and Julia Roberts as her stepmother was also in cinemas. This kind of occurrence is hardly anything new in Hollywood. In 1998, Armageddon and Deep Impact battled for top spot as disaster movie of the year. More recently (as in, last year), Jon Favreau released his live-action Disney adaptation of The Jungle Book. Next year we can expect another adaptation, this time with Andy Serkis at the helm.

If you love fairy tales and Disney movies, there’s no doubt you’ve watched this TV series. Although it features characters from Peter Pan, Alice in Wonderland, Frozen, Rumpelstiltskin, and Sleeping Beauty, amongst many others, the main characters are Snow White and Prince Charming, as well as their daughter and grandson, who were created for the show.

Watch The Huntsman: Winter’s War, your Sunday night movie on 12 February at 20:05 on M-Net.

Fairytales not your thing? Try tales of a different kind with your other Sunday night movie selections: sci-fi thriller 10 Cloverfield Lane at 20:30 on M-Net Movies Premiere or Pedro Almodóvar’s latest film, Julieta, at 21:00 on M-Net Edge.

Gallery
The screening of My Name is Reeva
See images from this event.
Video
[FROM THE ARCHIVES] There's a tiger in my backyard!
𝗧𝗵𝗶𝘀 𝘀𝘁𝗼𝗿𝘆 𝗼𝗿𝗶𝗴𝗶𝗻𝗮𝗹𝗹𝘆 𝗮𝗶𝗿𝗲𝗱 𝗼𝗻 𝗦𝘂𝗻𝗱𝗮𝘆 𝟮𝟰 𝗢𝗰𝘁𝗼𝗯𝗲𝗿 𝟮𝟬𝟮𝟭. The demand for wild pets is rising in South Africa, fuelled in part by cute online animal petting videos and the misconception that they can be fully domesticated. But are exotic pets safe to keep at home? We ask how a Gauteng couple ended up with two endangered white tigers in their suburban backyard. Your favourite episodes are now available on Carte Blanche: The Podcast: https://linktr.ee/carteblanchetv
News
A Night of Firsts – The Bachelorette SA
First Impressions, interceptions, big reveals, lucky breaks, and the first exit.
Video
Meet Ruan – The Bachelorette SA
This architecture student may come from Bloemfontein, but he looks more like he comes from Winterfell. Meet Ruan Meyer.