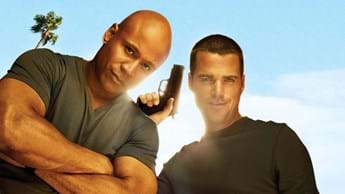 Fans will be seeing a somewhat different NCIS: LA when the cop action series returns to M-Net (DStv channel 101) in July for S12. When the COVID-19 pandemic gripped the world, S11 of the series was cut from its usual 24 episodes to 22. Now S12 will feature only 18 episodes. But they’ve packed an entire, longer season’s action and excitement into those episodes.

“In fact, the shorter season is going to pack a mean punch,” says series lead Chris O'Donnell (Agent G. Callen). “The writers went out of their way to make the shorter season more action-filled than any of the previous seasons. From the word go, viewers will be glued to their screens as one action scene after the other unfolds. And yes, there will be car chases, jumping on to and off buildings, shootouts, and loads of bad guys that will keep the NCIS: LA team busier than before.”

Rapper and actor LL Cool J, who plays Callen’s agent best buddy, Sam Hanna, adds that the two agents’ relationship will really take off this season. “Fans refer to their friendship as a bromance, and this will be revved up in S12 as they connect not only as colleagues but also become part of each other’s family lives. They will connect on a more personal level. And I think it’s fun. Their interactions will be funnier and viewers are in for a great season,” promises LL.

Callen, who spent most of his life in foster care, finally finds his own happiness in S12. “He and Anna (Bar Paly) have been together for a while now, but in S12 they consider getting married and starting a family. He’s always been big on family due to his past and after tracing down his biological parents, so he wants to have his own little nest with a wife and kids,” says Chris, who has five children of his own – sons Christopher (21), Charles McHugh (18), Finley (15), and daughters Lily Anne (22), and Maeve Frances (14).

“Family has always been a priority in my personal life. It’s family first and business second.” Chris’s kids even played a part in him taking on the role of Callen in the series. “We live in Los Angeles and the show is filmed here, so when I agreed to do the show it was because my family was with me and I could leave the set at the end of the day and go home to my wife [Caroline] and the kids.”

LL, on the other hand, is tight-lipped about his private life and only says, “We are a happy family.” However, the rapper, who is working on new music for the first time in 7 years, this time with rapper pal Q-Tip, says that his character Sam is going to get a chance to spend some time with his daughter, Kam (Kayla Smith).

Episode 10 (titled The Frogman's Daughter) is a Sam-and-Kam-centric episode. “Kam is now grown up, a real feisty teen who doesn’t hold back when it comes to discussing personal issues or things that are bothering her. Sam is this Gen X dad dealing with a millennial daughter. There will be friction, of course, but I would say they are happy together. She even moves in with him, so Kam is with him most of the time. She understands his job and she’s level-headed and can look after herself,” reveals LL.

Sam and Callen aren’t the only agents with family plans. “Marty Deeks (Eric Christian Olsen) and Kensi Blye (Daniela Ruah) are also planning to settle down and start a family,” teases LL. “I don’t want to spoil their fun, so viewers should just watch the new season as all these agents’ stories spread out to their personal lives.”

And the NCIS: LA family is also growing. LL is excited about Caleb Castille being upgraded to a permanent cast member in the role of Agent Devin Roundtree, as well as Medalion Rahimi as tech expert Fatima Namazi. “The team is very protective of the new family members who joined. All the agents will guide them through the process and keep an eye out should there be trouble coming their way.”

Although things on-screen sound great for the team, behind the scenes things were different. “We filmed during a pandemic so the crew had to come up with a way to film with all the protocols in place,” says Chris. “We have to do COVID-19 tests every day we are on set, that’s about 5 times per week. The crew organised a mini-lab on set so that results are available almost immediately.” For LL, the COVID tests are a challenge. “Do you know how far they stick that swab down your throat? I have these severe gag reflexes every time the tests are performed,” laughs the actor.

LL adds that viewers might notice that scenes will have fewer people in them too. “Gone are the days of 8 people in one room, for S12 it will be mostly 3 people. The team is also working apart, doing their one thing, and only team up if they have to do an investigation together. But then it will only be 2 agents, like Chris and me, in a scene, with no extras.”

Things on set also changed, says Chris. “We used to be this big family, this huge crew, and everyone knows everyone, but now you never see each other. The crew and cast are divided into 2 groups, the yellow and the orange groups. For instance, the orange group will go in and get the set ready and leave. Then the actors, who are the yellow team, will go in and practise our lines while social distancing where possible, set up the shots, and leave. The orange team will then go back in, sanitise the whole set, and leave before the yellow group goes back to film the scene.”

LL has the last word. “Although there is a pandemic out there, which we will only touch on slightly in the new season, we hope to bring excitement and adventure to viewers, who, most of them, have been holed up at home due to lockdown. We are dedicating this season to the families and fans around the world.”

M-Net is available on DStv’s Premium package. To upgrade your package or to get DStv, click here.