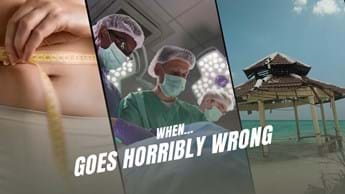 Do you secretly “collect” cruise ship chaos stories: Stranded at sea, plumbing gone wonky and everyone throwing up from the gorge-all-you want seafood buffet? And oh, no, a hurricane is headed their way?

Do you have a strange fascination with “unsuccessful” plastic surgery?

Do you browse 1-star restaurant and resort reviews, even though you haven’t been on holiday for years?

With the holidays coming up at the end of June, it’s the perfect time to book a trip aboard the SS Schadenfreude… embarking from the CBS Reality dock (DStv Channel 132) on Saturday, 4 June at 20:40.

““You just keep thinking, ‘Well, I'm glad it wasn't me.’ But there's something compelling about them.””

Glynis is on board as narrator for all 4 of the “Horribly Wrong” documentaries we’re seeing this June. “It's turned out to be very popular. And I just couldn't believe what I was seeing. It was horrendous and yet compelling at the same time. You know, the spider bite. I nearly fell off my chair!” she says, referring to the first in the series, When Luxury Holidays Go Horribly Wrong. That spider bite incident in question? It caused a holidaymaker’s leg to blister, erupt with boils and go necrotic, and we get to see it at its worst.

Puzzling out the appeal, Glynis muses, “It’s like heightened reality TV. You see real people and what's happening, it's dramatic. I've just done four more (in the Horribly Wrong documentary series), and it’s exciting to watch, but terrifying at the same time. You keep thinking, “Well, I'm glad it wasn't me. But there's something compelling about them.”

You cruise, you lose!

In the Gone Wrong spirit, we chatted to Glynis about her own idea of luxury holiday hell. “I would say cruising. I've been on a holiday in the Caribbean when these huge cruise ships come in. They're just too big for the harbour and bay. They affect the water levels, and they actually do a lot of damage. Suddenly, on this small little island, you have 5,000 or 10,000 people suddenly swarming off (the ship). I'm not a fan of that sort of thing.”

Glynis has narrowly dodged cruise ship horror herself. Her husband (actor Paul Antony-Barber) was not so lucky. “I had an opportunity to go on one, just before the pandemic, because they have a lot of entertainment on board. My husband was offered one (a gig). They were flying him to New York first-class, then they gave him a first-class cabin that cost an arm and a leg because he was doing a one-man show. I was given a ticket (too) and I said, ‘You know what? Why don't you go first? Tell me what it's like.’ And I am so glad I didn't go! They took off from New York and it was beautiful. The sun was shining, and he had this unbelievable room. He had a butler! Then, about one day out of New York, they hit bad weather. They had to divert. There was no sun and there was no land in sight. For a week, he was on the high seas. He was told (earlier) that the ships don't move that much because they're so vast. He said, ‘Well, that was a lie!’ He took footage of his cabin swaying and everything moving, and he couldn't go out on his beautiful personal deck because it was absolutely covered in water. I definitely would have been seasick. So yeah, I'm not up for a cruise. Definitely not.”

Glynis’s most miserable holiday experience didn’t come courtesy of huge seas, but of tiny microbes. “I remember this holiday with a boyfriend, his sister and her boyfriend. We decided to go to Spain, north on the west coast, on the Atlantic, where the weather is much more like England. We were young, so we were staying in pretty basic places. And then on the first night, we went to a tapas bar. We all ate the same food, but when we got back to the room, I started to feel ill. Everybody else was fine. Nobody else had a problem, I obviously got one random prawn that was off! I then proceeded to become so ill with food poisoning, I couldn't move for two or three days. I have never been so sick in my life. I honestly thought this was it! ‘I can't survive this; I'm going to die’. I then had to get through the next week where I had stopped being sick, but I was weak and depleted. That's got to be one of my worst trips ever.”

To balance that out, Glynis shared her idea of holiday bliss. “I love the beach. I love warm weather. And I love snorkelling in warm seas with a coral reef and lots of fish. That is my idea of heaven. I love the Caribbean because it fits all that. I'd lie in my lounger with a daiquiri in hand, and the sea was calm. Then, I’d plunge into the sea have a little snorkel. It was so colourful under the water. There was so much going on. That really was an idyllic holiday. I do like to relax because I often go through periods of just working so hard that I'm exhausted. All I want is sun, I want a beach, and I want swimming.”

Glynis has already had a glimpse of what the travel and luxury holiday world has become in 2022. And it’s not looking good. “The travel that we knew, with cheap flights, I've got a horrible feeling that that is over now. I just had my first trip to America, which was also my first trip in two and a half years, and it cost an arm and a leg. We'd done the same trip just before the pandemic – and the hotels were much more expensive now. America is really expensive now. Everything was expensive. Car hire was astronomical. Travel is going to become not really affordable for a lot of people. It doesn't feel like it's a quick fix; this feels like this could be a long-term thing.”

So, ladies and gents, while your plane is stuck on the runway, for your viewing pleasure, might we suggest a little Gone Wrong programme?

Glynis is firm on travelling light… except for one thing: her pillow. “Wherever I go, I take my pillow with me. I like a particular kind of pillow: soft, not bouncy and spongy. And very flat. It's a bit of a pain, because a pillow can take up quite a lot of room in your suitcase. So, I hate it. But I'm here, filming in Liverpool, and I've got my pillow with me,” Glynis shrugs.

Watch When…Goes Horribly Wrong, Saturdays & Sundays at 21:40 on CBS Reality (DStv Channel 132), and on Catch Up