New Year’s resolution #1: Watch what I want on DStv 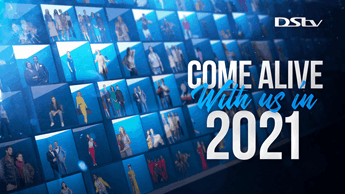 DStv’s #TGIFestive campaign had customers spoilt for choice with great local movies and series and international shows throughout December 2020. And now DStv is making 2021 Twenty-Twenty Fun!

After a whole year of biting our nails over absolutely everything in 2020, it’s time to set our usual Janu-worries aside and get the year off to a great start with more shows to love, whether it’s just for you or the whole family. And if you’re into making New Year’s resolutions, there’s a channel and a show to help you on your way on DStv. Learn new skills, meet new people, go to wonderful places, all with your TV.

Viewers can look forward to incredible local content in the new year from brand-new thrillers like M-Net’s Lioness and kykNET’s Afgrond, 4Mure and Slot, to Mzansi Magic’s heart-clenching new reality series, Abandoned, along with the returns of series like Die Boekklub and Boer Soek ’n Vrou. Check out the 3 hottest shows first, then flip through the rest…

Starting in January, the powerful drama series, Lioness, tells the story of a woman who loses her children, her lover, and her freedom when she is framed for fraud committed by her husband before his death, only to discover, eight years later, while trying to reunite with her son and daughters, that he is still alive.

Five women from different walks of life, including Julia Cilliers (Jana Kruger, Karen in Projek Dina), a psychologist who’s struggling with feelings of guilt over the death of her child, cross paths when each of them must fight for their survival. Starring Marguerite van Eden, Kim Cloete, Gretchen Ramsden and Kanya Viljoen. Watch from Wednesday, 17 February, on kykNET (DStv 144) at 20:00

In this new 5-episode thriller, a brilliant psychiatrist develops a therapy for her patients that can immediately expose underlying traumas. But due to the illegal nature of the drug, she must offer it in secret. Starring Rolanda Marais, Brendon Daniels, Greta Pietersen, Albert Pretorius and Trudy van Rooy. Watch from Tuesday, 12 January on kykNET (*144) at 20:00

This 5-episode drama series from writer Tertius Kapp (creator of Die Spreeus) plays out in the same hotel room, but with a different character and storyline in each episode. The only common denominator is Marcelina (Lida Botha, Ouma Bettie Steenkamp in the movie, Griekwastad), the hotel cleaning lady. Also starring Beer Adriaanse. Watch from Tuesday, 12 January, on kykNET (*144) at 20:30

This reality series hosted by actress Phumeza Mdabe offers people who were abandoned at birth or in early childhood the opportunity to find their birth parents and ask those questions that have troubled them their whole lives. Using private investigators, Phumeza travels all over the country to confront the parents.   Watch from Tuesday, 19 January on Mzansi Magic (DStv 161) at 20:00
Watch Mzansi Magic

Chef and food editor Herman Lensing can perform miracles with a microwave oven! In Herman Se Mikro-geheime, he combines his two loves: chatting and cooking. He has guests in studio, and once the food is in the micro, it’s question time – be prepared for more than just food secrets in this brand-new series.  Watch from Wednesday, 20 January on VIA (DStv 147) at 17:00
Watch VIA

In cooking competition show Afloskombuis, presented by Neels van Jaarsveld (Ben van Wyk in Fynskrif), each week two teams compete to prepare a delicious dish. But there’s a catch: the 3 members of each team take turns in the kitchen, and when they tag the next person, they must guess what the previous one planned.   Watch from Friday 22 January on VIA (DStv 147) at 17:30
Watch VIA

Live From The Red Carpet: The Grammys

There are also a wide variety of sports events that will take off in 2021 and SuperSport has them all available on their 19 channels.

From the Euro 2021 Football tournament, the British and Irish Lions Rugby Tour, The Tokyo Olympic Games, The Golf Majors (Masters, PGA Championships, Open Championship, US Open), Tennis Grand Slams (Australian Open, Roland Garros, Wimbledon, US Open) and Formula 1 and MotoGP – all these and more are available exclusively on DStv.

So why would you want to go get your TV pleasure anywhere else? #TGI2021

Go on, watch another with 47 Box Sets on DStv this April

The biggest hits become the best Box Sets on DStv this April. Binge on them all, from Lioness to love Island, Abandoned to Die Boekklub, all in your own time