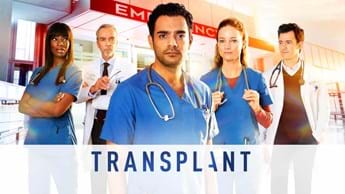 Transplant Season 2 begins with the staff of York Memorial Hospital reeling from seeing Chief of Emergency Medicine Dr. Jed Bishop (John Hannah) collapse in front of them with a stroke in the Season 1 finale. With Jed still down for the count when we return, everyone is going to have to get used to a new boss, the somewhat unpredictable Dr. Mark Novak (Gord Rand).

The other big shocker from the start of the season answers a question that we had at the end of season 1: “Who’s that?” We saw Jed’s protege, Syrian refugee Dr. Bashir “Bash” Hamed (Hamza Haq), stunned when he was approached by a mysterious woman – someone his little sister Amira (Sirena Gulamgaus) seemed to recognise. It turns out Bash’s fiancée, Rania (Nora Guerch), survived the bombing of her house that he believed had killed her in Syria.

For both Jed and Bash, that means it’ll mean that a season of change lies ahead.

Bash has believed for the past 5 years that Rania was dead. Seeing her again shakes all the new foundations he built in Season 1. “As with any story of displacement, be it through a choice or a forced circumstance, refugee or immigration, or a you're always left with, ‘Where I'm going’ and ‘where I'm coming from,’ I can say that's a personal experience,” declares Hamza. “Rania reminds Bashir of a life that he thought he had once lost, and it's thrown back into his face, when he's finally starting to find his footing within the hospital, and he's got friends and he's finding a little bit of familiarity in moving forward,” Hamza adds. “[She is] somebody who his sister Amira is now super attached to and there's the possibility of her having somebody stable as well. Rania coming into the picture throws into question what is best for not only Bash but for everybody in his life. It’s this very internal struggle that he's dealing with for the vast majority of the season.”

It’ll place Bash at a romantic crossroads, after he developed feelings for his colleague Mags (Laurence Leboeuf) in Season 1. “He has a second chance to rekindle a romance that he thought he had lost permanently,” admits Hamza. “This is somebody who brings him the comfort of home. And there is genuinely a good amount of love that still remains. But there’s also this other half of him that has moved on. As they try to figure out how to move forward, there’s a speed bump or 2 along the way.”

One of those bumps might be Bash’s drive to take care of everyone around him before he sees to himself. “He won’t even explore something for himself, because at some level, until he achieves a certain level of comfort or a certain level of success or takes care of his sister, he won’t think about what he needs as a person, as a man, and to some degree, maybe he doesn’t even think he deserves it because of the enormous guilt that he feels over the loss of his parents and everything,” Hamza explains.

Bash’s mentor Dr. Jed Bishop spent too much time in bed for his own tastes in season 1, after Bash was forced to operate on him with a power drill to release pressure from bleeding inside his skull. Now he’s back to being a patient in his own hospital. And a new boss in town, Dr. Novak, means all those times that Jed played fast and loose with the rules back in Season 1, especially with regards to Bash’s paperwork, could come back to wreck them both. “[Novak is] certainly around for long enough that some of the questions that Bishop faces about how he behaved and the choices that he made in Season 1 are not only putting himself in jeopardy, but as Bash’s mentor and protector, then he, too, could be in some jeopardy,” John warns.

“Sometimes, as we have seen when people are in charge, they think they can make the rules up and bend them to suit, but there is certainly going to be fallout from what happened and Bashir is certainly in the firing line for a lot of the damage that's coming down the line,” reveals John. “There are moments of high jeopardy for both characters that creates tensions.” And with Jed and Dr. Novak’s history, nobody should get comfortable, “There's history between myself and Novak, and we don't know what that is. It doesn't appear to be great, and when people are working on the front line like that, that doesn't necessarily help. Dr. Bashir is there because of me. I'm his shield, as it were, I'm his protector. And if I end up going, then it puts him in a very precarious situation,” reveals John.

“It is this push and pull about, like, 'Well, this guy approaches medicine the same way that I do, but also, he's not Dr. Bishop, who I love and care for so much, and he's responsible for this opportunity that I have.' And because [Bishop and Novak] have a history, it's like he's [Bash] cheating on him [Bishop] and doesn't really know what to do. In that sense, it offers a great amount of tension,” says Hamza. “We filmed some lovely scenes and Bashir has to make some tough decisions and have some tough conversations with Bishop and phenomenal scenes between Bishop and Novak as well, and we see how that impacts Bash and Bishop's relationship too, because Bishop understands the game.”

Award-winning Syrian playwright and actor Ahmad Meree, who worked as a cultural consultant on Transplant Season 1, joins the cast as Omar in Season 2.