Kids’ highlights this August on DStv 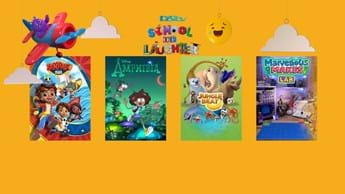 No matter which DStv package you have, August is going to be an incredible month for your kids, from the tinies to the tweens and teens.

Big news for little kids includes the brand-new Paw Patrol season and a big marathon to help get everyone excited for the Paw Patrol movie, which is out in cinemas from Friday, 20 August.

There are plenty of imaginative live action series for tweens and younger teens, too, including the return of The Bureau of Magical Things,and the launch of the brand-new Disney series Spin.

The School of Laughter is the most fun way for kids to learn about the world. Here are the top highlights for this month:

When an accident strands a blind dad (Steve Byers) in the wilderness with only his sister’s dog, Chinook, to help him, Chinook must lead him to safety while his family mounts a rescue mission.

Teen orphan Annabel lives with her grandfather on an island, surrounded by love and friendship. She even has a dolphin pal – until another side of the family decides to seek custody of her.

In this Norwegian animated moo-sical comedy, Klara the teen cow visits her retired rock star dad on his farm, hoping for his help with a talent competition, only to find the farm in peril.

Fixies are tiny beings who fix electrical appliances. But when 1 mischievous Fixie gets hold of superpowered bracelets, a boy and a professor must figure out how to stop him in this Russian animation.

The Bureau of Magical Things S2

Teenaged Kyra gains supernatural powers after she stumbles upon a world full of magic. This season, Kyra and Darra’s search for a lost temple awakens a dangerous artefact that makes elf and fairy magic malfunction.

In this hidden camera prank show, special effects artists transform celebrities so that they can go undercover as substitute teachers to surprise a class of students. Celebs include Peyton List, Chloe Kim, Lele Pons and Gabriel Iglesias.

Indian-American teen Rhea lives with her multigenerational family. After her mom’s death, she’s her family’s rock – until she falls for aspiring DJ Max, who reminds her of her own musical talent and dreams of being a producer.

Tech-savvy 10-year-old Ryder leads a team of first responder puppies as they help the folk of Adventure Bay, who’re cursed with a bizarrely incompetent mayor, a rival town’s corrupt mayor, and his Kitten Catastrophe Crew.

The jungle animals, including Munki, Trunk and Tallbert, are disturbed by the arrival of 3 human explorers – Simon, Rita and Mirabelle – and their puppy, so they do their best not to be seen, throughout the season.

Down On The Farm S1

This kids’ series explores the outdoor world of farming and the countryside, from livestock to harvesting. Presenters JB Gill and Storm Huntley will show kids where food comes from and how it's grown.

The Marvelous Makes workshop showed you all sorts of projects you could make with modelling clay. Now the Makes lab will show you experiments that you can perform at home using ordinary household goods.

Three company bosses bring a group of kids into their business for a week to allow them to experience adult work first-hand and explore careers beyond the normal ones they see in the media or find out about at school.

Get ready for the Disney Ultimate Princess Celebration!

Clear the big table, lay down some protection for the surface, and bring out all your crafting goodies! It’s time for special episodes of all of Da Vinci’s most creative shows today including Marvellous Makes Lab, Darwin & Newts, Milly Miss Questions, Infotoy, Hands Up,

Do You Know? And Totally Rubbish.