Get your fists up, ladies! 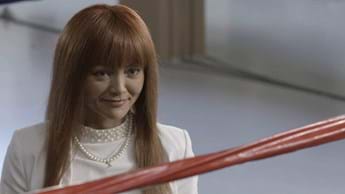 Lionel Foster (Jody Abrahams) is a lekker guy – or at least that's how he describes himself in the Afrikaans telenovela Arendsvlei.

He likes his beer cold, his melkie (milk) in the fridge (and beware anyone who touches it), and he sees himself as the best PT (physical education) teacher at Hoërskool Arendsvlei.

He’s the sort of guy who looks after his health, and joining a boxing club for exercise would seem to be a logical step in his self-care. But it leads to bickering between himself and his love, Janice (Crystal-Donna Roberts), because her nemesis – Ingrid (Rehane Abrahams) – works there. Lionel isn’t looking for trouble, but that’s what he is going to get, because it’s not long before Janice and Ingrid collide spectacularly…

Janice can’t stand Ingrid and for good reason. Ingrid killed Janice’s brother, Steve (Elton Landrew), last year and got away with it. “Janice forbids Lionel from getting involved with the boxing club, but Lionel isn’t bothered by that. He takes very few things seriously, and he thinks that Janice will change her mind once she cools down,” says Jody.

Meanwhile, Ingrid is putting pressure on her partner at the club, Lennie (Dann-Jaques Mouton), to appoint a fitness coach for the club since the previous coach, Jo (Clayton Evertson), did a disappearing act.

When Lennie sees how hard Lionel is training, he realises that Lionel would be the perfect candidate for coach. Besides boxing, he knows that Lionel is good with kids. “Lionel loves a challenge and immediately accepts the offer. Now he’s not only going to be the best physical ed teacher, but also the best fitness coach – and it boosts his self-esteem,” says Jody.

Ding-ding! Get in the ring

Janice grinds her teeth when she hears about Lionel's new appointment, but what actually irks her more is that she catches Ingrid openly flirting with him when she goes to see Lionel at the club. Then Janice makes a threat that gives Lionel a fright: “She says that she’s physically going to get Ingrid,” says Jody. “And no one will be able to stop her. It worries Lionel because he knows that she is serious.”

The tension and conflict between Janice and Ingrid escalates quickly and it reaches boiling point when Ingrid pitches up at Janice and Lionel’s house to return the clothes that he forgot at the club. “Janice is fuming,” says Crystal-Donna. “She doesn’t want to stand back anymore, and she lets Ingrid know that she will also join the club and make Ingrid’s life hell.”

But Ingrid doesn’t scare easily, and she isn’t bothered by Janice’s threat. In fact, she is ready to fight and challenges Janice to a boxing match. “Janice is licking her lips,” says Crystal-Donna. “She is so ready for this fight! She has been waiting for an opportunity like this!”

Lionel is aghast about this potential fight and tries to stop it, but nothing will stop Janice and Ingrid from stepping into the ring. It’s a fitting end to a knockout November, and the start of a punch drunk December in Arendsvlei.