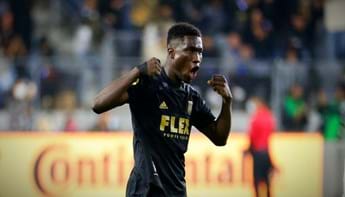 Fall, a 19-year-old defender, was signed by LAFC in 2021 on a two-year deal with options running to 2024. The Senegalese native joined the Black and Gold from the Soccer Institute of Montverde Academy in Orlando, Florida, and was a teammate of 2020 LAFC signee Mohamed Traore.

Like Traore, Fall made his way to Orlando via Salif Diao's Sport4Charity Organisation based out of Dakar, Senegal, and was selected to the Senegal U-17 Youth National Team in 2019. That same year, Fall also had the opportunity to train with the U-17 and U-19 teams at La Liga club Villarreal.

Fall spent some of last season on loan at the Las Vegas Lights, playing in the USL Championship (the second tier American league, below the MLS), allowing him to adapt to his new surroundings and gain experience, before returning to LAFC and establishing himself in the team.

This season he is firmly a key player for the Black and Gold, drawing praise from coach Steve Cherundolo (who was his coach at the Knights) and teammates alike.

“With Steve, it’s like going back to high school. To understand the game, you really have to study the game. Steve has experience playing in Europe, so he’s taught me that, back to when I was playing in Vegas for him,” said Fall.

The defender wears the name ‘Mbacke’ on his jersey as a tribute to his father and something of a personal challenge, as his dad warned him that few players who break into professional football rise to the top – something the Senegalese is determined to do.

The player added, “My idol is Paolo Maldini. I didn’t get a chance to watch him play [Maldini retired in 2009, the year Fall turned seven years old], but I went to YouTube to watch him and fell in love. He wasn’t fast, but he was smart. After that, I fell in love with the way Sergio Ramos plays.”

Fall will hope to feature strongly for Los Angeles when they take on Seattle Sounders in an MLS Regular Season clash at Lumen Field on the evening of Saturday 18 June 2022, a game you can catch LIVE on ESPN.

See Mamadou Fall in the following match live on ESPN: