Coming up in Lingashoni in September 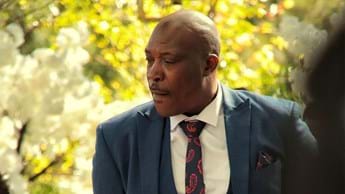 The gloves are off, the earrings set aside, the wigs are secured, and the battle lines are officially drawn between sister wives Puleng (Thuli Thabethe) and Seipati (Liteboho Molise) this September. And the knives are out in their fight for their husband Mandla Cele’s (Patrick Mofokeng) heart in telenovela Lingashoni.

As we celebrate the telenovela’s 100th episode, which aired on Thursday, 9 September, the rival wives’ feud intensifies, leading Puleng to resort to drastic measures to get Seipati out of the picture. And apart from Puleng holding Seipati hostage, another marriage is put through the wringer – it’s one disaster after another for the Celes this September.

At first glance, the Celes are the perfect family. Mandla is a self-made millionaire with two stunning wives, Puleng and Seipati. Together, they live in perfect harmony in their lavish Bassonia mansion in Johannesburg.

But it’s all a façade. If you’ve been following the show, you’ll know that there isn’t a day that goes by without drama in the Cele home. And if you’re looking to get into the show – or refresh your memory, there are a couple of details we need to fill you in on…

Puleng is in above her head

When it comes to keeping secrets, no one does it quite like Puleng. She’s followed by a trail of deceit, which began 10 years ago. All hell broke loose when Mandla caught her in bed with his henchman Papi (Thato Molamu) on a random evening. Terrified that Mandla would kill both her and Papi, Puleng shot Mandla. She convinced Papi to bury the “corpse” at a nearby river. But as it turned out, Mandla was still alive and to escape getting killed off for good, he jumped off a bridge only to land face down and unconscious.

When Puleng and Papi didn’t hear from Mandla in 10 years, they thought it was the end of their worries, but then, one day, Mandla returned home. Their saving grace is that Mandla developed amnesia on the night of his disappearance. The bad news for Puleng, however, is that while he was away, Mandla took another wife, Seipati – and she refuses to divorce Mandla in favour of wife number one.

While Puleng goes above and beyond to ensure that Mandla’s memory remains erased, with their vow renewal ceremony set to take place this September, Seipati is out to tear Mandla and Puleng apart at every turn.

If Puleng and Mandla think that they are going to renew their vows in peace in September, they have another thing coming. Seipati unearths incriminating information against Puleng. Rather than going straight to the police or revealing the details to Mandla, Seipati confronts Puleng.

The spat between the sister wives gets so nasty that Puleng resorts to extreme measures to prevent Seipati from exposing her secret. Puleng calls the only person she can trust – Papi – and together, the tag team hold Seipati hostage while they think of their next move.

September brings more twists for the Celes as Puleng’s daughter Mpumi (Lerato Nxumalo) is at odds with her overbearing mother-in-law Sarah Nomdumo (Zukisa Matola). Tired of Sarah talking over her and bullying her, Mpumi stands up for herself, which escalates matters. Sarah kicks Mpumi out of her house and while the daughter-in-law is happy to leave, her marriage with Donald (Siya Raymond Sepotokele) hangs by a thread. Can love survive?

Watch Lingashoni S1 Mondays-Thursdays on 1Magic (DStv channel 103) at 19:30 and on Catch Up

Puleng and Seipati reconcile, while Donald wants to be father in Lingashoni this October.

Mohau & Mpumi’s affair exposed in Lingashoni, this August on DStv