Coming up on DiepCity this August | DStv

Higher stakes in DiepCity on DStv in August 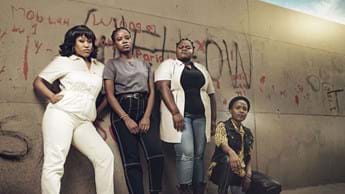 Diepsloot Township is turned upside down this August when the police discover a corpse in the veld in Mzansi Magic (DStv channel 161) telenovela DiepCity.

Considering that gangster Mgedeza (Mduduzi Mabaso) is known for torturing his enemies, killing them and dumping their bodies around town on the daily, it could be anyone. But Sne (Nompumelo Vilakazi) and her all-female gang Wrong Turns are convinced that the remains belong to her abusive taxi driver boyfriend, Fistos (Mzikayise Makroti), since they inadvertently killed him in the final week of July.

With the cops searching for the culprits this month, the ladies are walking on eggshells, terrified that their cover will be blown. But they aren’t the only ones hiding in plain sight, as Mgedeza having an affair with his associate, Zola (Sonia Mbele) – and it’s only time until his wife, Maureen (Vele Maneje), gets to the bottom of his cheating.

Surprise! Where is my nephew?

It isn’t the cops who come knocking at Sne’s doorstep first, though – it’s Fistos’s meddling aunt, Makazi (Nomonde Tafeni), who arrives unannounced and searching for answers midway through August. Call it auntie intuition or paranoia, but Makazi suspects that something is amiss.

It’s unlike Fistos to pull a disappearing act. So she announces that she isn’t leaving Diepsloot until she talks to her nephew, which sends Sne into a tizzy.

Someone should tell Makazi to make herself comfortable because she’s asking the impossible.

Misfortunes never come one at a time, and Sne’s anxiety is aggravated when Fistos’s corpse is found in a ditch.

In a turn of events, Sne’s brother, Themba (Nkululeko Mashinini), is arrested for the murder. According to police reports, Themba has assaulted Fistos after Fistos once again assaulted Sne. The most recent brawl between Fistos and Themba happened in July. Themba was livid that Fistos had returned to Diepsloot after the taxi driver vowed to never set foot in Sne’s home - and to make things worse, Themba has explicitly threatened to kill Fistos on multiple occasions. Themba’s chances of getting released are looking slim.

Realising that there’s no other way to clear Themba’s charges without incriminating the Wrong Turns, Sne hands herself in at the police station for the murder. She won’t stand by and watch her brother face jail for a crime he didn’t commit. Sne believes that the police will let her walk free if she claims that she was defending herself. But Makazi doesn’t buy the story…

Corpses and arrests aside, Mgedeza and Maureen’s marriage takes centre stage this August – for all the wrong reasons. Mgedeza didn’t expect to fall head-over-heels with his mistress, Zola, but he is completely smitten with her and he can’t bring himself to end the affair when Maureen probes him about his infidelity.

Instead, Mgedeza shocks Maureen when he suggests that he takes Zola as his second wife. For Mgedeza, it makes sense: Maureen and Zola get along. While Maureen is the kept woman who enjoys cooking him meals and catering to his every need, Zola is the quintessential ride-or-die. She runs her own gang and she’ll help him to build a criminal empire. It’s a match made in heaven.

Before Mgedeza finishes making his point, though, Maureen refuses to share him with Zola, and she throws him out of their bedroom. Maureen will spend the month trying to keep Zola from ruining her family.