News
19 August 2020
Having concluded their song presentations, the Lockdown Housemates proceeded to take on the second Task of the day, courtesy of Hawaii Nigeria.
SUBSCRIBE TO WATCH

Earlier today, the Housemates were given one hour to put together a one minute song on the soap variant they represent and it was interesting watching them entertain us with their serenading voices. For this second Task, three games were set up in the Arena for each team: sack race, stack it up, and bucket splash. To begin with the games, the Housemates were instructed to move into the Arena for the 'Stack It Up' game.

For this round, Biggie laid down some ground rules to keep the game organized and fair - each team had to select one player for this round of the game. Using the corresponding Hawaii soaps on the tables, the players were given three minutes to build a tower. The team players had to all stand by their corresponding table colours and await the sound of the buzzer.

Lucy represented Team Hawaii Gold, Prince was repping Team Hawaii Carrot while Neo held it down for Team Hawaii Papaya. In the end, it was Prince who scooped a win as he finished before the given time elapsed. 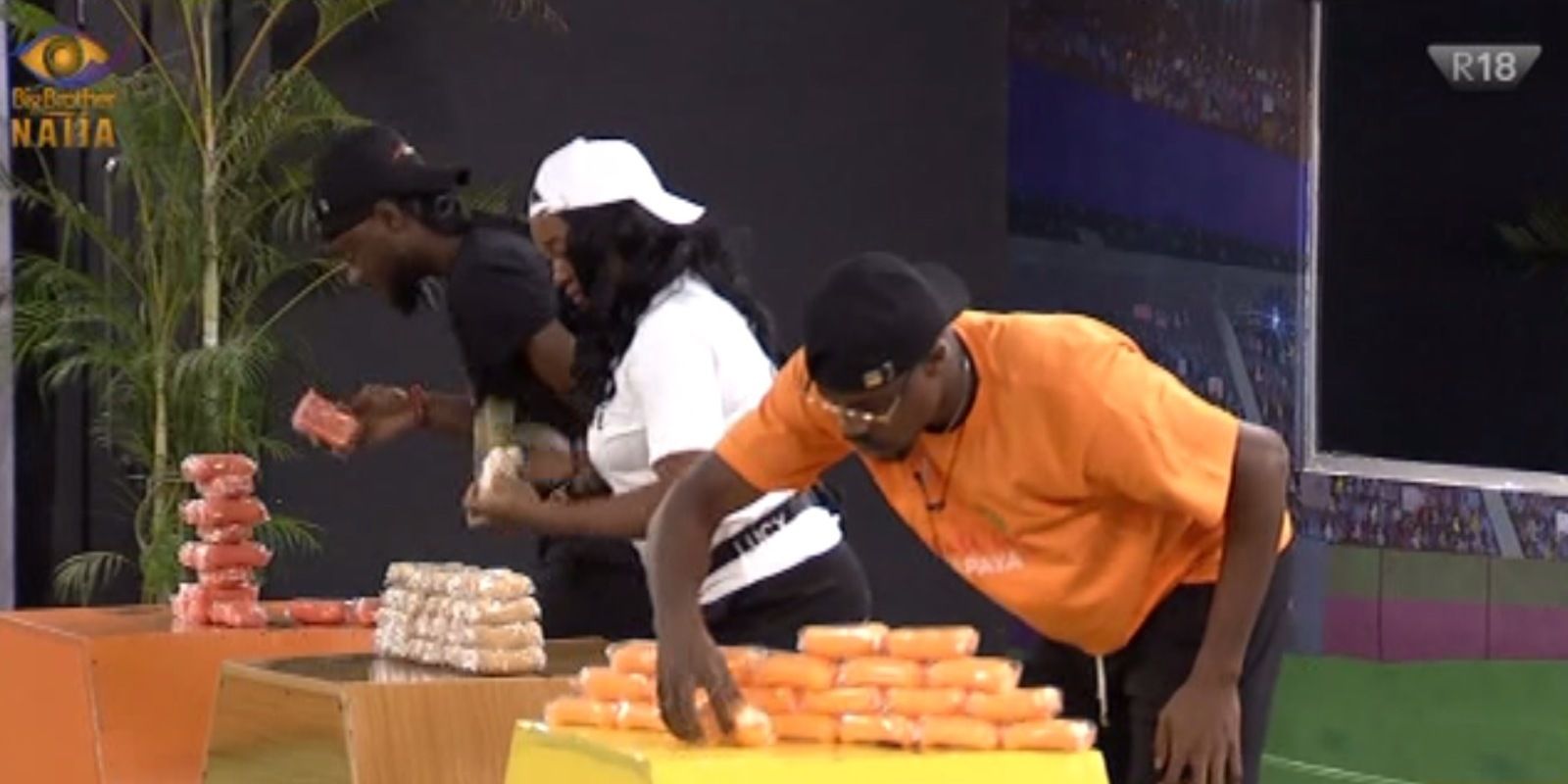 For this game, the selected team players were required to toss Hawaii branded balls into a bucket. On behalf of Team Hawaii Gold, Kiddwaya started the game first, followed by Praise for Team Hawaii Carrot and Ozo, representing Team Hawaii Papaya. Splish-splash went the balls but unfortunately, the teams could only get in two balls in total out of almost eight balls given to each of the members. 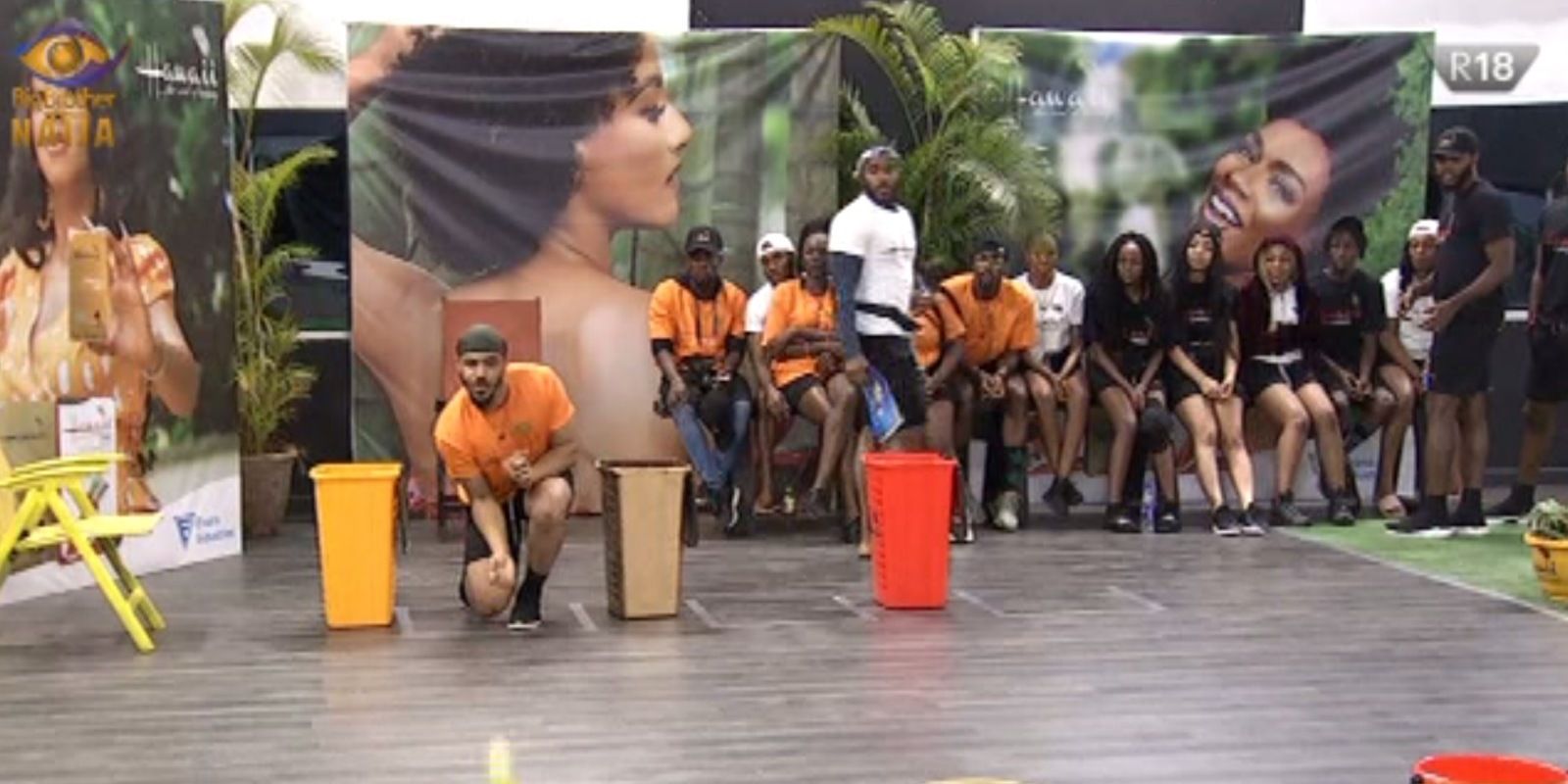 Taking turns, all members of each team were required to place both of their legs inside a sack that corresponds with the colour of their Hawaii merchandise and hop to pick fruits from a basket. Each fruit provided carried different scores, the heavier or bigger the fruit, the higher the score: watermelons carrying five marks, pawpaws carrying four marks, coconuts with three marks, and carrots with one mark. The team members struggled to go for the big fruits first and we sure had fun watching them hop, run and struggle with the fruits. Did you see Dorathy? 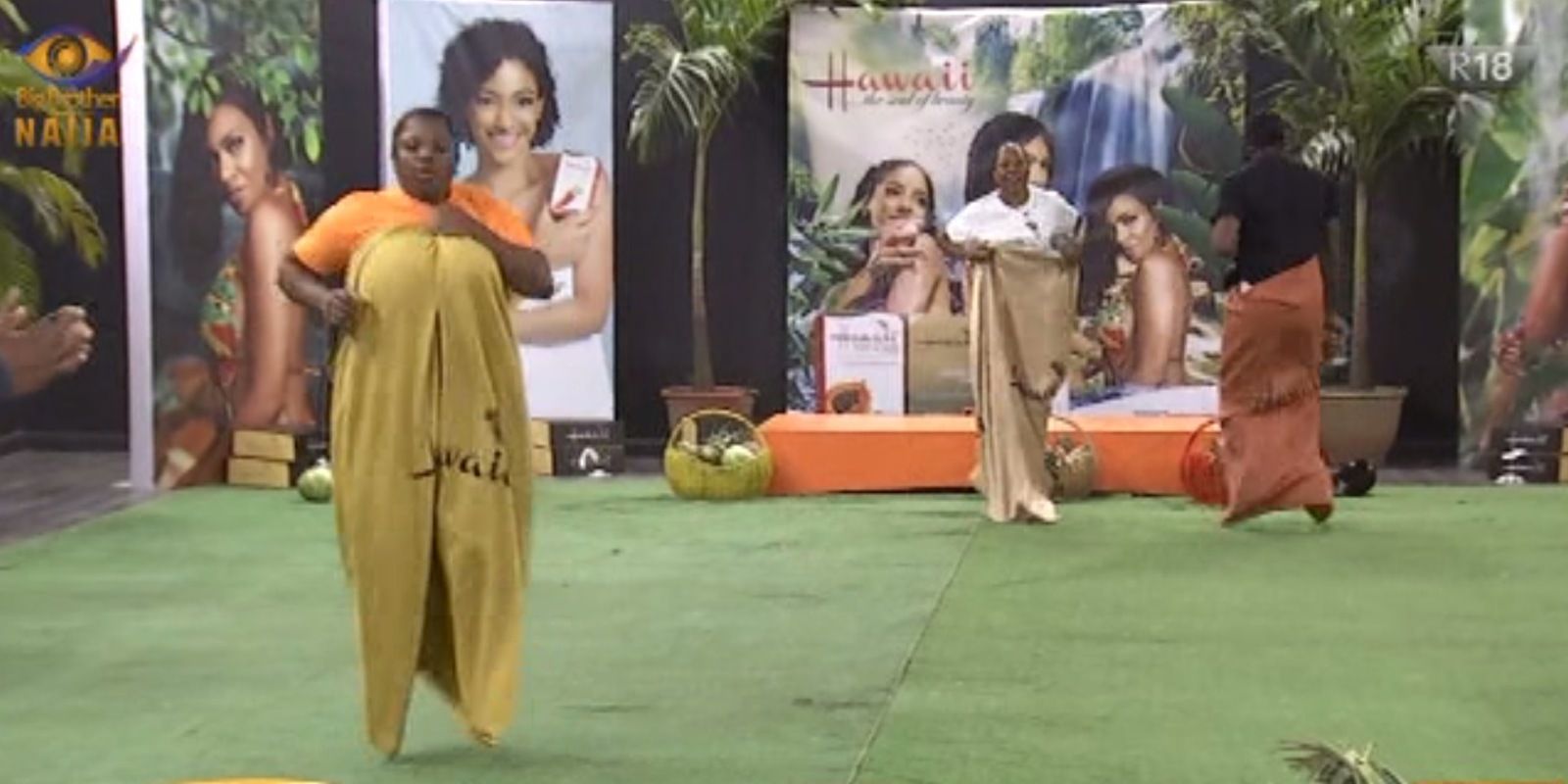 After their third game, the Lockdown Housemates were each gifted with a box of Hawaii products, which was met with gratitude and smiles. 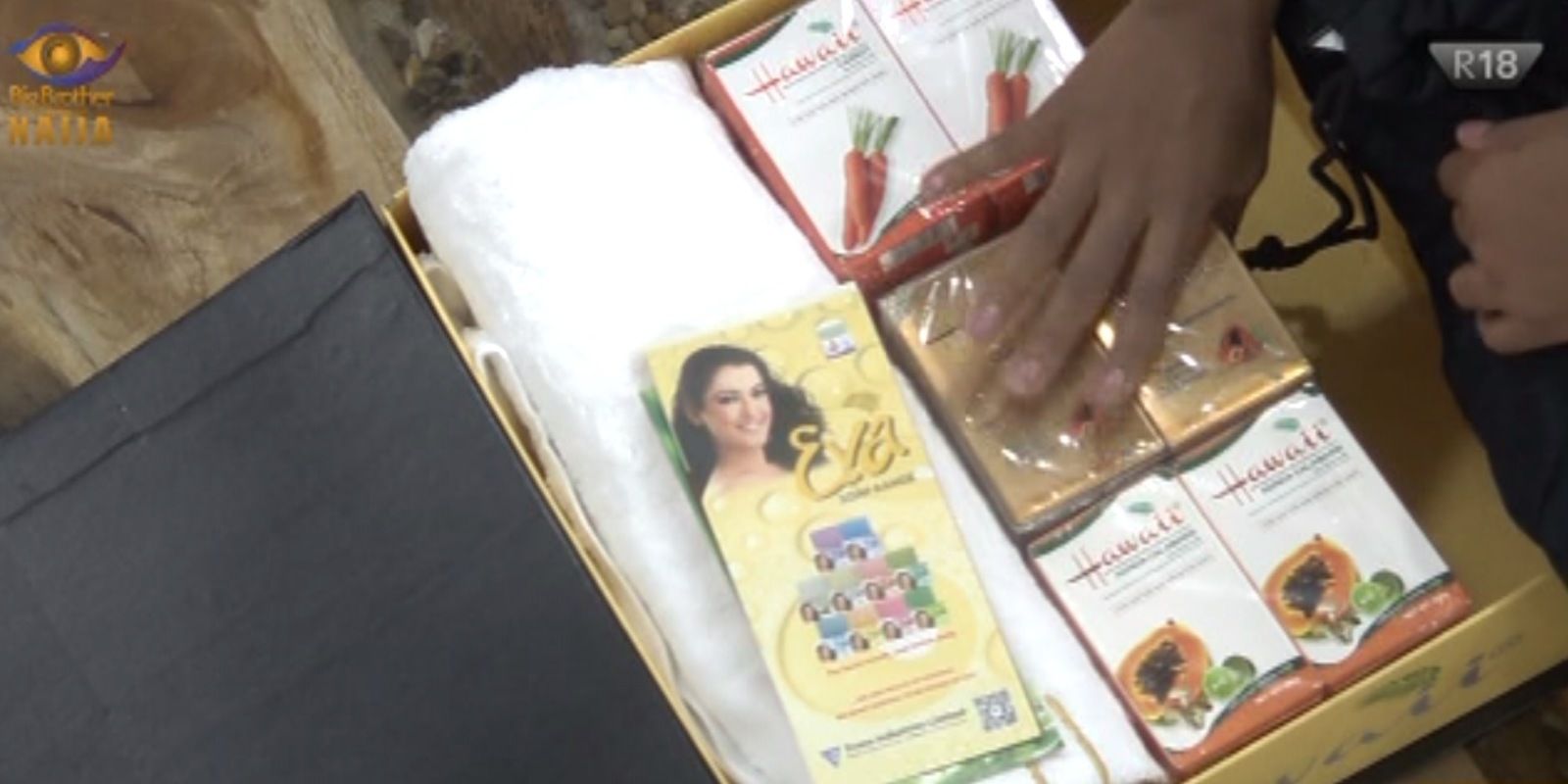 Team Hawaii Carrot for the win!

In the first round, they were tasked with creating a one-minute song for Hawaii soap. Team Papaya scored 15 points in that round while Teams Gold and Carrot scored 10 and 19 points respectively. In the second round, Team Carrot again dominated by building the tallest soap tower in three minutes. Team Papaya and Team Carrot both successfully tossed only one ball into the bucket, while Team gold failed to score any ball. In the final round, Team Papaya transferred all fruits in the basket without losing a point. Team Gold dropped two points while moving their fruits, while Team Carrot dropped just one point in that round.

The total accumulated points for each team is as below:

This means Team Carrot won today’s Ekulo task. Congratulations Laycon, Nengi, Praise, Prince and Wathoni. For winning this Task, they were rewarded with the cash prize of two million Naira, courtesy of Ekulo. 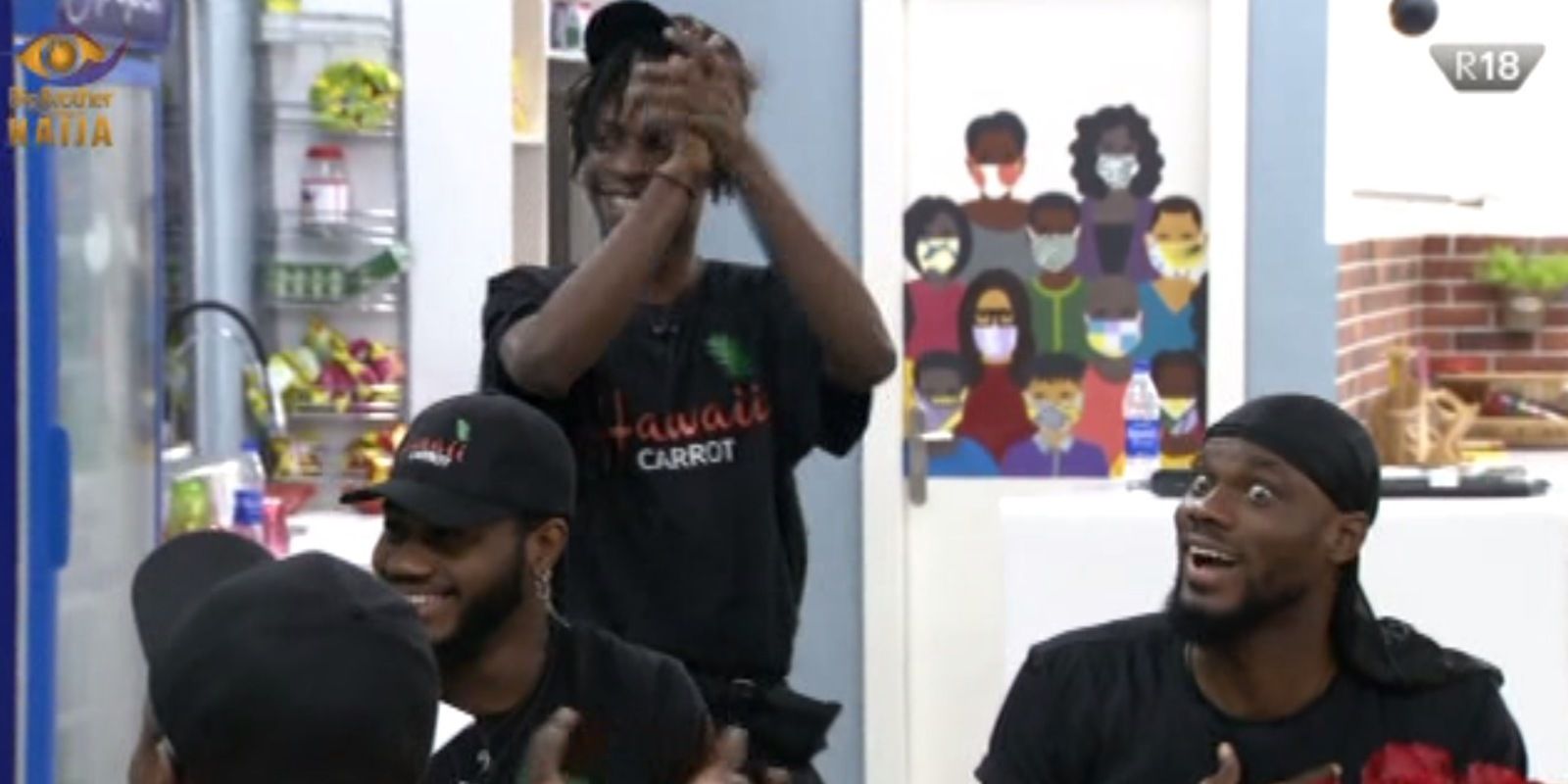 While we wait to celebrate today's win by Team Hawaii Carrot, do you think the House stands a chance of bagging this week's Wager win, seeing that we've caught them doing nothing but gist and sleep all evening? Stay tuned!

News
Day 61: A Hawaii experience Task – BBNaija
The House received an interesting Task that had them ready to question just how well they really the Hawaii soap and each other Housemates.
Video
Day 31: A big win for Team Hawaii Carrot
After completing their song presentations, the Lockdown Housemates were tasked with sack race, stack it up and bucket splash games. At the end of the Task, Team Hawaii Carrot scored 65 points and won the cash prize of two million Naira, courtesy of Ekulo.
Video
Day 31: The Hawaii presentation
Three different teams made up of the Lockdown Geng compete to win the Hawaii presentation task.
News
Day 31: Hawaii helps the Housemates clean up
The Big Brother Housemates were tasked by Hawaii Soap, and this is how they cleaned up the challenge.