Coming up on Gomora this December – Watch it on DStv

All’s fair in love and war in Gomora this December

Ntokozo invites MaZet to move into his parents’ house and Thathi is blind to her new love Phumlani’s obsessive antics on Gomora. 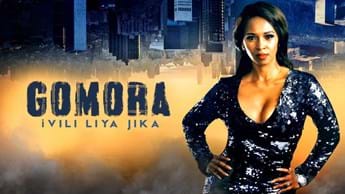 Alexandra Township heaves a sigh of relief when they learn that hijacking kingpin Don (Israel Matseke-Zulu) has been murdered in telenovela Gomora (DStv channel 161) this December. For the Dlamini and Ndaba families, things can now return to normal. They’re no longer forced to live in fear that Don might attack them at any minute.

While his family is preparing to bury him and close the painful chapter, the evening of Don’s murder continues to haunt the Alex residents, especially his babymamma and killer Zodwa (Sannah Mchunu). She is tormented by his death and his so-called ghost.

However, it isn’t all doom and gloom this month as Thathi (Katlego Danke) finds love again following her very public and humiliating affair with her married ex-boyfriend Melusi (Zolisa Xaluva). But little does Thathi know that her new suitor is a wolf in sheep’s clothing…

The shootout, in which Don was killed, has had dreadful consequences for gangster MaZet (Siphesihle Ndaba) this December. She is told that her spine is damaged, leaving her permanently paralysed. Shock, frustration and confusion take over MaZet’s life and she grows depressed.

As a result, MaZet pushes her loved ones away, and she tries to dump her boyfriend Ntokozo Dlamini (Ntobeko Shishi). But he isn’t ready to throw in the towel. Ntokozo fights for his romance with MaZet – and he later convinces her to move into his parents Gladys (Thembi Seete) and Melusi’s house. But her presence in the Dlamini home soon causes tension between Ntokozo and his folks…

Ntokozo is so blinded by his love for MaZet that he doesn’t take his parents’ feelings into consideration when he arrives home, pushing his gangster girlfriend in her wheelchair, carrying her luggage in his hand. Gladys and Melusi are taken aback as they’ve never liked MaZet.

The truth is that nothing good has ever come from MaZet and Ntokozo’s relationship, and his parents fear that if the young love birds continue dating, the worst will happen. At the same time, Gladys and Melusi realise that if they kick MaZet out, they might lose Ntokozo in the process. So they’re stuck with MaZet in their house… but Melusi is conspiring to get rid of her.

Zodwa and her kids, Teddy (Sicelo Buthelezi) and Sibongile (Nandipa Khubone), lay Don to rest this December. But nobody’s resting in peace before that funeral. First, the police visit Zodwa’s home to question her about the murder – and while she denies killing Don, Zodwa can’t help but fear the worst. Eventually, Zodwa’s anxiety gets to her and she almost turns to alcohol after years of sobriety.

Later in the month, Zodwa experiences recurring nightmares of Don. She hears his voice when she turns off the lights to sleep and she sees images of him in the early hours of the night. Zodwa is terrified. Even after she arranges a cleansing ceremony in her home, a sangoma reveals that her house is still haunted. Zodwa might be out of ideas, but she will continue trying to get rid of Don’s presence in her life, this time for good.

Thathi is a woman in love this December when she falls for newcomer Phumlani (Buyile Mdladla) – a tall, suave, and well-spoken man who’s always walking around in a tailored suit and carrying a briefcase. But what exactly does Phumlani do for a living?

Phumlani goes all out to impress Thathi. He takes her out on fancy dates, he buys her daughter, Buhle (Ama Qamata), a fancy birthday gift, and he even worms his way into Thathi’s mother Mam’Sonto’s (Connie Chiume) hardened heart.

However, Phumlani’s true colours are gradually revealed as the month unfolds. It turns out that he is completely obsessed with Thathi, and he orders a hit on any man who talks to Thathi. Talk about creepy. Thathi should run for the hills – and fast, because Phumlani is an entire red flag waving in her face.