News
24 July 2018
What you had to say about the latest episode of My Kitchen Rules SA.
Subscribe To Watch

Seven Instant Restaurants visited, and three more to go before we hit headquarters. In the latest episode it was Donald and Luyanda's turn to impress the judges and guests. It wasn't quite the smooth evening they'd hoped for, but they've got plenty of fans rooting for them.

Well done Donald and Luyanda. No one understands the pressure in the kitchen, especially when it is not your own. Stay strong and keep cooking! #mkrsa

Diego had to hang up his #MKRSA apron, but he's still rooting for his fellow cooks. 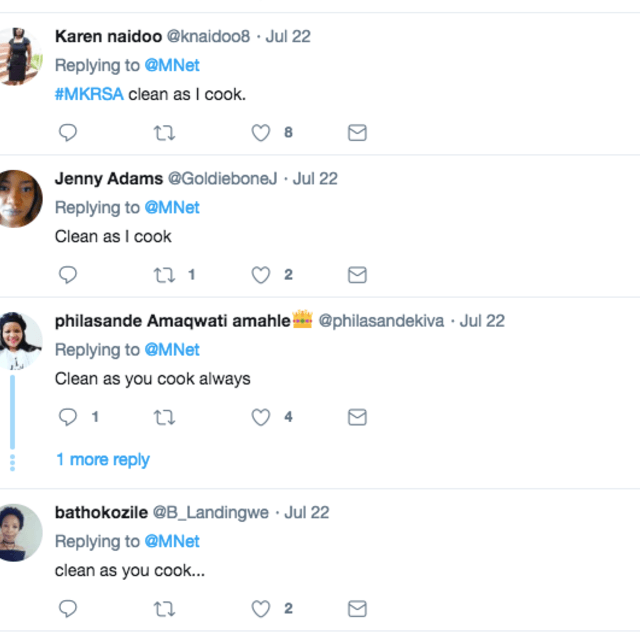 The dessert was definitely a winner.

That pear and almond cake looks delicious.The addition of amasi is also cool.🏆#MKRSA

And the intrepid food buddies were also tweeting along.

Thank you guys for tuning in!!
We did our best 🙏🏾
See you next week #MKRSA pic.twitter.com/nWS2ZqW70N

What A Show ! It’s Not Over Till The Fat Lady Sings ! #Rufaro #MKRSA .. pic.twitter.com/85zTigWtvf

My Kitchen Rules SA is broadcast on M-Net channel 101 every Sunday night at 18:00.

Viewers can also watch exclusive interviews with the judges and contestants here.

News
Ciao Palesa and Palesa – My Kitchen Rules SA
Your thoughts on Palesa and Palesa's Instant Restaurant.
News
Can The Joneses set the MKRSA pace?
Coming up on MKRSA!
Gallery
Welcome to The Dinner Club
Check out pictures from Retha and Tshepi's Instant Restaurant.
Video
Looking forward to MKRSA season 3
David Higgs and J'Something are hoping their tummies will be satisfied in the third season of My Kitchen Rules South Africa.