Your basket of Easter treats on DStv’s School of Laughter

Friday, 2 April, to Monday, 5 April, will be fun for the whole family as DStv’s School of Laughter packs the schedule with special episodes and movies. 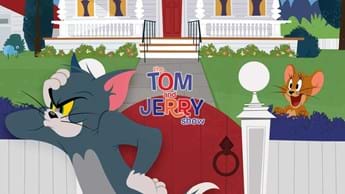 For many families across South Africa Friday, 2 April, to Monday, 5 April, will be our second Easter weekend of social distancing. This means none of those big holiday gatherings with the people we love. So DStv is going all out to make this the best Easter weekend and Family Day celebration ever!

The DStv School of Laughter apprentice Easter Bunnies have put together special baskets of episodes of your favourite funny shows that centre around Easter, family time, eggs, treasure hunts, baby animals and everything to get you in the mood for your own little hunts, feasts and snuggles on the sofa. There are movies for everyone to enjoy too, and a little foretaste of what’s happening throughout April.

A non-stop, three-hour strip will bring kids their favourite Nick Jr (DStv channel 307) characters and series in Easter-themed episodes. The Paw Patrol pups are on a mission to save the town’s Easter Egg hunt and Chickaletta’s runaway egg. Blaze and The Monster Machines sees our friends in a race to find the most eggs and also saving a bunny. The Rusty Rivets gang are staging a rescue on Dino Island. The Top Wing crew are celebrating spring but there’s a lost egg to find, and they help the stork to sort out an egg mix-up. The Bubble Guppies follow an egg trail to the Oyster Bunny and there’s a story about sorting out those grumpy feelings.

All the kids’ favourite toons are here with special Easter, egg and rabbit-themed episodes. See Peppa and her friends, including Rebecca Rabbit, speculate about the nature and appearance of the Easter Bunny. SpongeBob finds the sea bunny that’s laying waste to Squidward’s garden simply adorable. And both the chipmunks and the penguins are caring for mysterious eggs.

Fluffy Bunny helps Junior the little orangutan to solve some head-scratching clues that will lead him to a great prize. Watch on Sunday, 4 April on ZooMoo (DStv channel 314) at 12:00
Watch ZooMoo

Get that all-month holiday feeling throughout April from Family Day onwards with Boomerang (DStv channel 308) shows that bring you families and friends to love as you go on crazy adventures together. Some favourite series will be introducing brand-new episodes. And check out our movies section for Tom & Jerry news! Peppa Pig S7 from Sunday, 4 April at 16:00 Blues Clues & You S2 from Monday, 5 April at 06:30 Kingdom Force from Monday, 19 April at 15:25 Pat The Dog from Monday, 12 April at 06:35 Watch from Sunday, 4 April-Friday, 30 April on Boomerang (DStv channel 302) at 16:00
Watch Boomerang

Nicktoons has put together an extra fun-filled Family Day filled with unusual friends, cuckoo bananas families, and all the chaos they create together in the strange places that they live in, including Peppa Pig, ToonMarty, Breadwinners, The Fairly Odd Parents, Alvinnn!!!! And The Chipmunks, and more. And kids will be able to enjoy fun with all these friends until the end of April. Watch on Monday, 5 April-Saturday, 30 April on Nicktoons (DStv channel 308) from 10:40
Watch Nicktoons

Quippy, weird and imaginative animated series Teen Titans Go! combines a sly comic look at superhero action and bizarrely imaginative scenarios to make for a show that older and younger kids can enjoy together – and the parents won’t mind either. From Friday, 2 April, to Monday, 5 April, it’s Teen Titans action all the way from 11am daily. It’s a combination of brand-new episodes, classics and Easter-themed storylines. And check out the movies section for more Teen Titans action.

Friday, 2 April: S6 (Brand-new! episodes 35-38). In this four-episode storyline, the Teen Titans intend to fly to LA, but wind up in San Pedro, where they hear of the villainous Carl SanPedro. Determined to stop this villain, they wind up tracking his crimes across the globe to Jamaica, India and Croatia, learning about local customs and legends along the way.

Saturday, 3 April: S4 (episodes 37-38). The Justice League holds a talent search hoping to uncover a new superhero worthy of joining their team, which Robin is determined to win. But with Starfire and her cats showing off their act, Raven dancing, Cyborg singing and Beast Boy transforming into a cow with a shocking trick, does Robin stand a chance?

Sunday, 4 April: S3 (episode 27 and 41-45), and S4 (episodes 18). In two special, Easter-themed episodes, the Titans must find the missing Easter Bunny and have to step in again when the Tooth Fairy tries to stage a coup on the Easter action. Then, in a five-episode story arc, the Teen Titans’ survival skills and knowledge are put to the test when they’re stranded on a desert island.

Monday, 5 April: S4 (episode 30). The Titans, who’re now old-age pensioners, take their first last trip to the world of Night Begins To Shine where they challenge a new villain, Ultralak.

As well as Easter Weekend fun, there will be plenty of great movie entertainment for kids throughout April with Teen Titans films, and even more Fireman Sam.

Tom and Jerry: Willy Wonka and The Chocolate Factory

Family viewing fun all around DStv

Outside of your School of Laughter channels, there’s plenty of Easter Weekend movie fun for kids too…

A Quokka named Daisy (voiced by Angourie Rice) has a crazy ambition for someone so tooth-achingly adorable – she wants to win the annual World’s Scariest Animal Championship. Looks like she’ll need a coach, and a washed-up, former champion Saltwater Crocodile Frankie Scales (voiced by Sam Neill) could be just the ticket to help her to achieve that dream. Watch on Thursday, 1 April on TNT (DStv channel 137) at 20:00
Watch TNT

This Russian-made computer-animated film is based on the 2017 novel Urfin Jus and His Wooden Soldiers by Alexander Volkov, but features the familiar characters and settings from the L. Frank Baum Oz books. A little girl named Dorothy interferes with the envious and power-hungry Urfin Jus’s plans for world domination with his army of wooden soldiers. Watch on Saturday, 3 April on M-Net (DStv channel 101) at 15:00
Watch M-Net

12-year-old Dre Parker (Jaden Smith) attracts the wrong kind of attention from his new schoolmates when he moves from the US to Beijing in China with his mom, Sherry (Taraji P. Henson). But local maintenance worker and kung fu master Mr. Han (Jackie Chan) teaches him not only to defend himself, but to gain control over his life with discipline. Watch on Saturday, 3 April on Studio Universal (DStv channel 112) at 17:20
Watch Studio Universal

In this sequel to Trolls (2016), tribes of trolls who perform different genres of music – Techno, Funk, Classical, Country, Rock and Pop – each guard a magic string. Barb (Rachel Bloom) the Queen of Hard Rock is plotting to steal the strings. But there’s so much more music out there, including funk, hip hop and K-Pop. Watch on Sunday, 4 April on M-Net (DStv channel 101) at 20:00
Watch M-Net

And look out for…

This Australian animated horror-comedy series from the team behind Kitty Is Not A Cat is one for the Scooby-Doo fans. It follows the adventures of surfing-crazy siblings Jan and Dean on their summer holidays on the island of Iki-Iki where they hang out with their uncle and a horde of mischievous, thrill-seeking monsters who sometimes need their help. This includes when Widget finds out that her body has left her head behind during the night, or when Dr Knutt courts danger by marrying a mutant termite queen.

In this live-action children’s show, the human Brooklyn-Bell family adopts miniature poodle Waffle after they find him in their house, but it's not long before the curious puppy causes chaos. Whether he’s barking all night long, running off in a huff because they won’t let him swim or bothering their neighbour’s cat, young Waffle is a handful. But he’s learning a lot about being helpful and minding his manners. Soon, he even takes on big-dog jobs around the house like washing the dishes.

Sydney To The Max S2

While outgoing teenager Sydney (Ruth Righti) and her best friend, Olive (Ava Kolker), navigate their early high school years, through flashbacks we also see what life was like for her widowed dad, Max (played by Jackson Dollinger as a teen and Ian Reed Kesler as a grown-up), and his BFF, Leo (Christian J. Simon), while they were in school during the 1990s. This season starts with Sydney celebrating Christmas and honouring her mom’s memory. Coming up, we’ll see her tackling environmental and social issues and getting her first period.

Last season, siblings Tommy (Jonathan Gotlib) the goofball, Nikki (Kim Or Azulay) the hot-headed leader, and nerdy Daniel (Amit Hechter) stumbled upon their parents’ top-secret spy lives as agents targeting evildoers who're endangering the environment. They formed their own task force, Spyders, to try to help Mom and Dad with their missions. Now they have some new outings on the way as the season begins with a case involving a flat tyre, one involving a suitcase and another with a camping theme.

Also look out for…

ZooMoo (DStv 314) is available on DStv Premium, Compact Plus, Compact and Family until 31 March 2021.

Sing, dance, laugh and make friends this week with DStv’s School of Laughter

Education and entertainment go hand-in-hand this week as we learn about DNA, discover the magic of kindness and saying Hi to old friends. All this and more in this week’s School of Laughter highlights on DStv.