Get ready for a week of blockbuster, adrenaline-pumping action movies as the best in the business bring you an all-out action extravaganza. 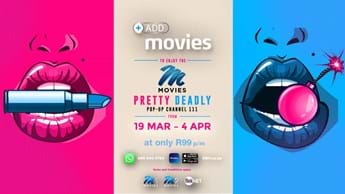 This month, the leading ladies of action are showing the boys how it's done with DStv’s Pretty Deadly pop-up channel (DStv channel 111) launching on Friday, 19 March. Exclusive to DStv Premium, Compact Plus, Compact, Family and Access customers can get it if they link the ADD Movies add-on package to their existing packages for R99 per month. Don’t miss your chance to see the hottest female action stars in action from Scarlett Johansson and Megan Fox to Halle Berry and Angelina Jolie.

Sunday night’s brand-new movie on M-Net (DStv Channel 101) is the even funnier family-friendly follow-up to the videogame-era remake, Jumanji: Welcome to the Jungle. Dwayne Johnson continues to deliver hit movies as the world’s highest-paid actor (able to demand $20 million per movie) and together with the hilarious Jack Black, Kevin Hart and Karen Gillian, Jumanji: The Next Level, it’s Jumanji like you’ve never seen it before!

If you prefer your action served with a dose of cult comic book fare, check out Vin Diesel in Bloodshot.

On M-Net Movies 2 (DStv channel 106) also on Sunday, is right up your dystopian city of the future’s alley. Based on the '90s cult Valiant Comics, Variety describes it as “a trash compactor of a comic-book film, but it’s smart trash, an action matrix that’s fun to plug into”.

It wouldn’t be an action line-up without the over-the-top bullet ballet (in the opinion of Empire magazine) that is John Wick. This week, the second instalment in the action thriller franchise makes its way to M-Net Movies 4 (DStv channel 108). John Wick: Chapter 2 delivers a significantly higher body count (128, compared to the measly 77 of Chapter 1), along with impressive stunts (most performed by Reeves himself), brutal gun-fights (beautifully choreographed) and of course, Keanu Reeves himself as the reluctant, brooding hitman.

Sisters are doing it for themselves this week with an entire channel dedicated to the most kickass female action stars. Look out for Teen Choice winner and People’s Choice nominee Megan Fox (Transformers, Jennifer’s Body) as Sam O’Hara in Rogue. She leads a team of mercenaries on a mission to rescue an ambassador’s daughter kidnapped by al-Shabaab.

Jumanji: The Next Level

The five-star cast of 2017’s hit reboot of the beloved 90s Robin Williams classic returns to the high-stakes videogame version of the world of Jumanji. This one has the added talents of comedy veterans Danny Glover and Danny DeVito, as well as the delightfully offbeat Awkwafina. With the action and laughs dialled up to the maximum, expect lots of hilariously mixed-up avatars, dangerous amounts of in-game lives lost and daredevil stunts as Dr Smolder Bravestone (Dwayne Johnson) leads his teammates in a race against time to once again escape the deadly videogame jungle.

Reprising the role of security expert Ray Breslin, Sylvester Stallone teams up with Dave Bautista and 50 Cent in the third instalment of this action thriller franchise to rescue the kidnapped daughter of a Chinese tech tycoon. But their mission gets personal when Ray’s girlfriend is also abducted and his foe turns out to be someone from his dangerous past.

Lauded by Variety as “his bruising best”, Bloodshot stars action legend Vin Diesel in the screen adaptation of the '90s Valiant Comics character, US Marine Ray Garrison. Killed in the field, he is brought back to life by a team of engineers and doctors, endowed with a near-indestructible body and superhuman strength. When Ray sets off on a vengeful quest to destroy the man who killed his wife, the fabric of his reality starts to unravel as his true enemy reveals itself.

The second instalment of Keanu Reeve’s deadly hitman franchise is a “bigger, bloodier, broodier sequel” (The Guardian) and the mind-blowing gun-fu action sequences are guaranteed to impress. John is ripped out of retirement (again) and lays siege to what seems like the whole of Europe in order to fulfil a contract he is forced to accept. But when the tables turn, he finds himself the target of the world’s best and deadliest assassins, and the fight for survival is on.

Remember, if you’re on DStv Compact Plus, Compact, Family or Access, you can ADD Movies now to link three DStv Premium movie channels to your existing package. Keen to find out how? Click here.

With an all-new, all-star April line-up plus returning favourites you won’t want to miss, there’s never been a better time to stay connected or subscribe to DStv Compact.

DStv Premium is all about the big names like Kaley Cuoco, Kate Winslet, Bryan Cranston and Dame Judi Dench – and the big events like Earth Day and Family Day this April