The North Water: Keeping it real 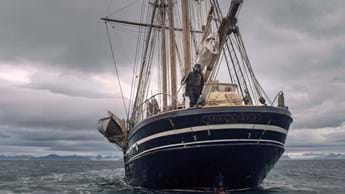 If you’ve ever stumbled across a film set in the wild with its multiple trucks, trailers catering, cables and tables, you’ll know that even filming a 30 second advertisement is a massive production. Now imagine taking all of that and moving it to the Arctic circle, so you could film on the pack ice itself.

The man in charge, director Andrew Haigh, had set himself a whale of a vision! “Ian McGuire’s novel (of the same name, published in 2016) vividly evokes the brutal beauty of the Arctic environment and I knew I had to try and bring a similar realism to the show. Despite the obvious challenges, shooting in the Arctic seemed the very best option. I wanted us to feel the biting wind, the bitter cold. I wanted to capture that fear that comes from being so far from civilization,” says Andrew, who worked with Jason Roberts from the Polar X team to manage logistics on the set.

Production designer Emmanuel Frechette agrees that authenticity was invaluable. “I knew, having done a lot of winter films and filming in the Arctic before, that it's really, really hard to recreate this environment anywhere else. If we weren't in the Arctic, we couldn't get this kind of lighting and these textures. If we chose to do it on a sound stage, it could be interesting, but it would be a completely different look,” he says.

10 ways to film in the Arctic

Card Link
Back to News
International 25 October 2021
The North Water: Keeping it real