Ice in the blood in The North Water 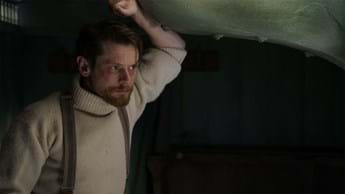 The North Water’s series creator, showrunner and director, Andrew Haigh, calls this twisted tale of death in the high Arctic, “A story about the world in chaos”. Andrew reveals that what drew him to adapting Ian McGuire’s 2016 novel was how relevant the struggle of these men in the 1850s feels to the world today.

“It is a story about man and our subconscious desire to control, dominate and manipulate each other and nature. What I loved about the book, and wanted to do with the story, is explore the concept around ‘for what end is this domination?’” asks Andrew.

The series’ key characters locked in that bitter struggle are ship’s surgeon, Patrick Sumner (Jack O’Connell), and harpooner and all-round sociopath Henry Drax (Colin Farrell) – Two men who have a lot more in common than you’d think, which slowly dawns on Sumner throughout the course of the series.

DStv spoke to Jack about his experiences bringing life to the psychological drama between Sumner and Drax, which plays out on screen when The North Water comes to M-Net (DStv channel 101) in late October 2021.

1: What was one of the most important discussions that you had with Andrew before shooting started?

Jack: Every time I spoke to him was a revelation. His take on one of those perspectives on Drax was particularly insightful to me – in that Sumner has this curiosity about Drax. As opposed to being instantly repulsed, he has a more kind of philosophical-based curiosity and a need to understand what exactly Drax is, as opposed to just writing him off as evil or a beast.

What allows Drax to only act on impulse? There was a conversation we had early on and helpful, that we have that darkness, we feel those impulses, that Drax is quite willing to just act on. In order to avoid that, there's a certain suppression of what exists in Drax, in Sumner and, arguably, in many of us.

2: What was it like playing Sumner’s gradual realisation that Drax is his dark mirror?

Jack: It constantly offered me a key to unlock what was up, and to perhaps be more quizzical about approaching scenes, because when Sumner starts out with their relationship, he’s jovial, pleasant, as he would be with anybody and then pretty instantaneously, he realises that he is in the presence of a sociopath, a psychopath. That offered a real entry into any scene that myself and Collin were in. The first half our stuff together was geared towards Sumner wanting to understand and conduct a thorough investigation by the questions he’d ask and the kind of conversation that Sumner would try and orchestrate with Drax, only for that then to be, in many cases, reversed against Sumner, and suddenly he's the one feeling like he's under observation and having to explain his ethos. It’s quite interesting, brilliantly written and it made for this little Tango of backwards and forwards.

3: Andrew compiled research packs for the cast in preparation for the show. What was in yours?

Jack: Largely it was information on where we go in the period, and any literature we could find that would be helpful to our own journeys (as characters). A book he sent my way was called Death, Dissection and The Destitute (Ruth Richardson, 1987). It was written a while ago about medicinal practice of the Victorian era – not a lot of anaesthetic, a lot of sharp objects, and quite an alarming amount of amputation. A lot of times they were taking a mallet to break a peanut, if you know what I mean. Heavy duty. It (surgery at the time) was more like a walk through a hardware shop than the delicacy that you see surgery being handled with. That, and many other forms of literature.

4: How did the props and wardrobe departments help get you into the scenes?

Jack: I’ll never forget the abscess scene as long as I live! I also fish a tooth out of Colin Farrell’s (character’s) arm, which was also harrowing, and completely conceivable to the naked eye, so I imagine on camera that's only going to improve. Props were having a field day, a lot of prosthetics, a lot of latex, a lot of re-enactments of hunting, all the guts and blood was completely recreated, which is always a treat. Anything beats dealing with green screens and tennis balls held aloft. It's a massive credit to Andrew for not faking it, as much as possible.

5: There a scene where Sumner falls between ice floes into the water in the Arctic. How was that filmed?

Jack: Everything above the water was filmed out there in the Arctic. And we found a break on the ice which would lend itself to what we would then recreate in our (shallow) water tank. So, our art department, in the water tank, built those 2 bodies of ice. Now that's not to say we didn't delve into Arctic water from time to time, but never on camera! We did that in our own time as a bit of a Polar Plunge type challenge. You can't go all that way and just look at it, you know?