News
30 September 2022
Some truth was served with a dash of spice during the dinner that Ebuka had with the Housemates.
Subscribe to watch Get Showmax

When we heard that Ebuka will be joining the Level Up Housemates for dinner, we had to get the popcorn ready and slip into our comfy clothes. Biggie surprised the Housemates with the entry of the vawulence master but even before they could leap for joy, he ordered them to freeze.

After keeping their joy to themselves for a few minutes while Ebuka helped himself to a drink, the ecstatic Level Up Housemates were ordered to unfreeze, sending them into a frenzy as they screamed and jumped. Daniella couldn't help herself and went in for a hug, prompting Bryann to follow suit. As though she was star-struck, Phyna exclaimed, "Ebuka who would have thought that I would be seeing you like this?" The scene was truly heartwarming to watch.

The Level Up Housemates eventually settled down and gave their guest a tour around the House. Ebuka teased them on their level of cleanliness to which they tried to justify themselves with Daniella innocently admitting to him saying, "it was cleaner than this earlier."

The tour of the Level Up House ended in Level 3 where a meal and pleasantries were decked out for everyone. No one asked any questions as they promptly started dishing for themselves following Ebuka's lead. They all settled around the table for dinner but there was more than food to be served. 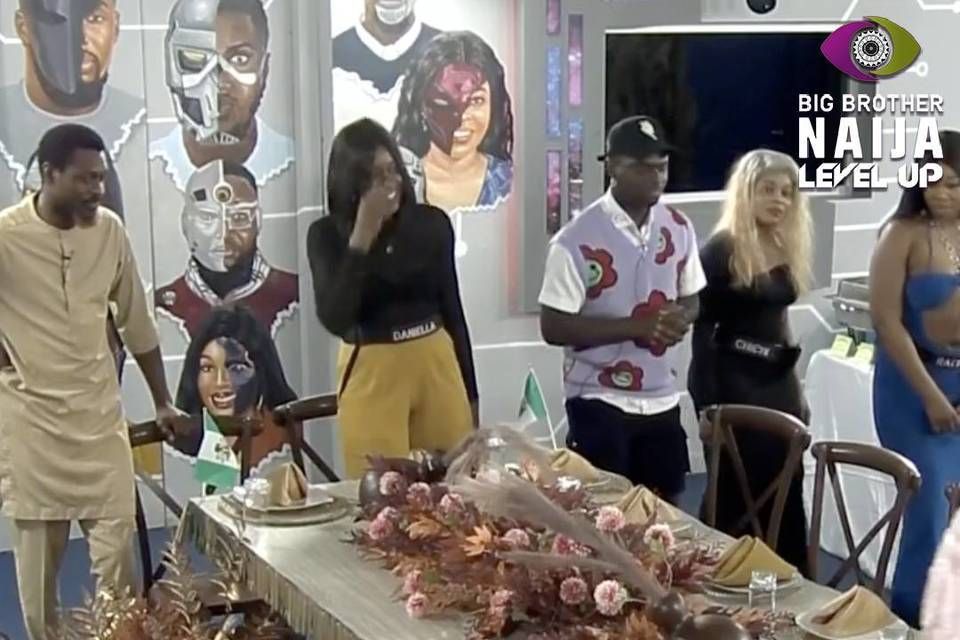 In true Ebuka style, the questions started rolling in. "Who of you saw yourselves here?" the vawulence master asked. "You mean here in the show or in the Finale week?" Phyna asked, to which Ebuka emphasised the latter. Chichi admitted that she didn't think that she would make it this far in the game and Adekunle shared in her sentiments.

The Housemates' responses to Ebuka's question led to him rephrasing it. "Ok, maybe let me put it this way: who of you manifested that they would make it to the Finale?". After a short silence that settled on the dinner table, Bryann said he manifested making it to the last day of the show but not really winning. Phyna on the other hand told Ebuka that she was not confident enough in the fact that she would make it this far and added that she was living from one Sunday to the next. Daniella said she was surprised that she was even selected for the show, let alone making it this far.

Things started getting heated around the table when Ebuka asked, "so who are you friends with now?" The question brought a number of unresolved issues between the Housemates to the surface. Bella said that she is still friends with the people she was friends with at the beginning of the season. She added that she was not surprised that she was on good terms with Rachel now since they were cool with each other before their altercation.

Bella admitted that she saw Bryann as her friend before this week, "I noticed that he is too childish Ebuka," said Bella as she justified her changed feelings towards him. She added that she is not friends with Chichi and doesn't know if she will be. She explained that they used to be cool because Chichi is Sheggz's friend but that they are co-existing now as she does not think she is a straightforward person. "She's too corny, is into cheap gossip, and lies a lot," Bella explained. Chichi said that it's not necessary for one to be friends with everyone. "How Bella feels about me is a reflection of herself," said Chichi.

Ebuka asked Chichi how she and Rachel are and she beat around the bush leading Rachel to admit that their foundation is shaky. Rachel said that she didn't think that Chichi actually said what she felt. "Yesterday, I and Phyna had an issue and Chichi went to Phyna and was talking to her about me," said Rachel. "Anything you want to say to someone, say it to her face," she added. "Am I the only one who said it?" asked Chichi who was adamant that other Housemates have spoken about Rachel behind her back.

Riders Rachel and Chizzy are Evicted

After tempers rose, Ebuka calmed the situation with some news that he delivered to the Housemates. He admitted that tonight was actually an Eviction night, a point the Housemates found hard to believe. Even when he explained that the next Housemate to be Evicted from the Big Brother House was Rachel, Chichi casually said, "it's a joke."

The mood changed when the doors opened for Rachel as she left the House, but little did they know that it was just the beginning. Ebuka explained that he had yet another name to read out. "The next Housemate to be Evicted from the Big Brother House is Chizzy," announced Ebuka. Housemates were now unsettled as Phyna asked "Chizzy, are you a Fake Housemate?"

Did Ebuka understand the assignment with his questions?

Video
Day 69: Breaking bread and tables with Ebuka – BBNaija
It’s two days before Big Brother Naija Season 7 Finale and Biggie’s twists don’t end. The show’s Host, Ebuka, surprised Housemates with a visit into the House where they had dinner and as per usual, he asked some pertinent questions.
News
Day 66: Ebuka's 5 Table shaking moments – BBNaija
The Big Brother Naija Show is incomplete without Ebuka giving the Housemates a good shake-up at the Live Show.
News
Post finale: Ebuka's epic table-shaking moments – BBNaija
The Housemates dread this moment but we live for and can't get enough of it.
News
Day 51: Scattered tables and relocations – BBNaija
Ebuka's questions disrupted the Shella ship and it was gist galore on Level 3.