News
29 September 2022
The schedule for the last days of the season is epic!
Subscribe to watch Get Showmax

There are only three days to this season's Finale and Biggie is pulling all the stops to make sure that the remaining Level Up Housemates get the royal treatment this week. With this being the final week of the show, we didn't expect anything less than amazing.

Here is what you can look forward to: 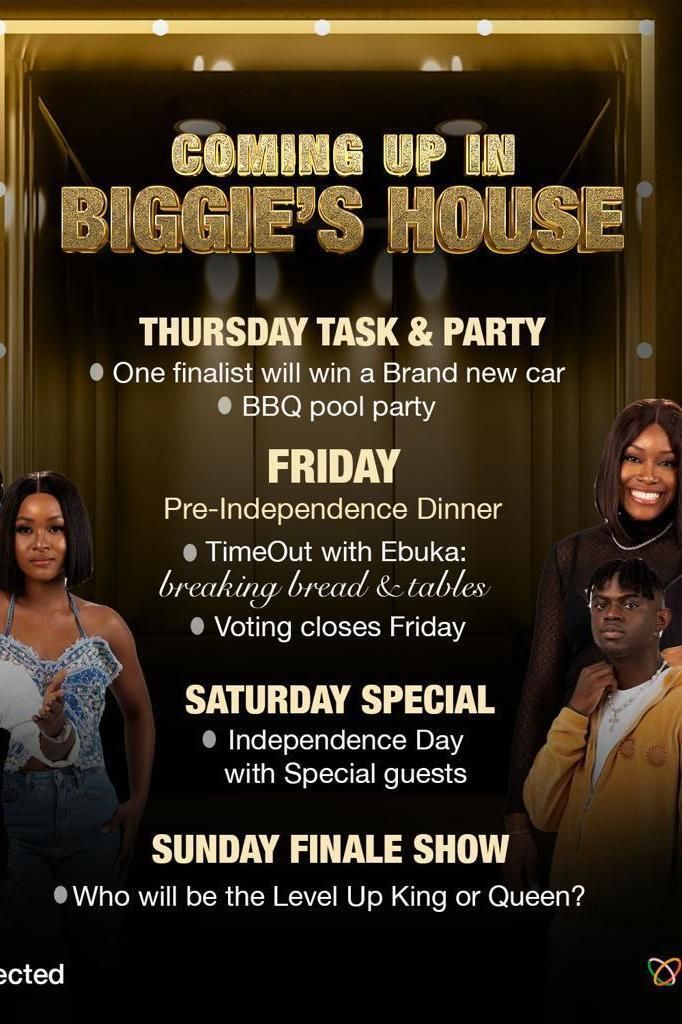 The Pride of Africa, Innoson Vehicles has secured the spot as this season's sponsor with the biggest prize. Yes, you guessed it guys, someone will be driving away from the show in a brand new Innoson car. The Housemates will need to bring their A-game for today's Innoson Task to win the ride though, but we can't wait to find out who that will be.

We have all enjoyed a front-row seat for Biggie's Pool Party turn-ups but today the Housemates will also be treated to a barbecue. Not only will they be getting down to banging beats, but Housemates will also have their fill of a succulent feast courtesy of Big Brother.

If you thought that Ebuka has already shaken his fair share of tables this season, think again. The vawulence master will be breaking bread with the Housemates during a special Independence dinner hosted by Biggie after which he will hold an interview to get the Level Up Finalists to share about their time in the House so far.

Added to the fact that we can look forward to some tea being spilled, we anticipate one more twist from Biggie. I mean, when has Ebuka signed out of a show without leaving us shook? So, save the date, tomorrow's dinner is not to be missed.

On the eve of the Finale, the Level Up Finalists will be treated to an extended party in the Arena. Not only will there be a DJ on the decks, the Housemates and you the No Sleep Geng will enjoy a live band as well as a performing artist. That's not all - the Evicted Level Up Housemates will also join the Finalists for the party that will run for an epic three hours.

The Finale will be jam-packed with entertainment from industry greats but one thing you can count on is nail-biting suspense. Who will take the crown as the Level Up king or queen? Will it be the analytical Adekunle, beautiful Bella, Bryann with the boyish charm, the poetic songstress Daniella, the cheerful Chichi, or strong-willed Phyna?

Tell us what other surprises you think Biggie has in store for the Finalists.

Adekunle, Bella, Bryann, Chichi, Daniella or Phyna could be the Big Brother Naija Season 7 Winner. You have until Friday 21:00 WAT/22:00 CAT to Vote for your Level Up Winner on Mobile, Web, and the MyDStv or MyGOtv apps. Watch the show live on the 24-hour channel 198 on DStv and 29 on GOtv. Fans across Africa and the UK can sign up on the streaming service Showmax. Make sure you don't miss anything from Biggie's world on our website and be part of the #BBNaija gist on Twitter, Instagram, Facebook, and TikTok. Season 7 of Big Brother Naija is sponsored by headline sponsor Pocket app and associate sponsor Flutterwave.

Video
Day 34: Biggie addresses Housemates' food war – BBNaija
"Sheggz and Bella go to the kitchen to cook things. Food go dey miss," said Adekunle as he and the Level 2 Housemates try to get to the bottom of the food issue in the House. This was after Big Brother reprimanded the Level 1 Housemates for being entitled to food that they did not labour to buy.
Video
Day 57: Nominated Housemates speak on their week – BBNaija
The Housemates up for possible Eviction have a chat with Biggie about how their week has been
News
Day 58: Eviction makes Housemates question Biggie's moves – BBNaija
With Five Housemates leaving the Level Up House in one night, the remaining Housemates ponder on their fate and Big Brother's twists.
News
Day 68: The final post-Eviction tree causes nostalgia – BBNaija
Biggie added three more pictures to the Evicted Housemates' wall, making Bella and Phyna nostalgic.