Once again, the Live Eviction Show left the #BBNaija House in a pool of mixed feelings, reactions and revelations. The Housemates had a stressful evening, saying goodbye to two individuals they had grown to know and love for the last eight weeks.

Whitemoney had a moment of silence with intervals of what seemed like muttering words. He seems to be deeply reflecting on the events of the Live Show or maybe even his life. Could it be that Ebuka’s questions threw him off a bit or stirred him in a new direction? We couldn’t make out what Whitemoney has been saying for the time we watched him sitting on the couch in the HoH bedroom but the Housemate was certainly processing a lot of information

Angel was having a fun moment all by herself, playing a game of pool. “Opor; PERIOD!” she occasionally shouted, hyping herself up during the one-man game she was enjoying. She sang some Burna boy tunes and a nursery rhyme style song. She eventually broke into a twerk celebration singing D’banj’s “Oliver Twist”. Obviously, the girl is celebrating the save she caught last night. She was also showing off some snooker moves which she attributed to Saskay’s game. “What did Saskay call this one?” she tried recalling before making her “winning” shot. 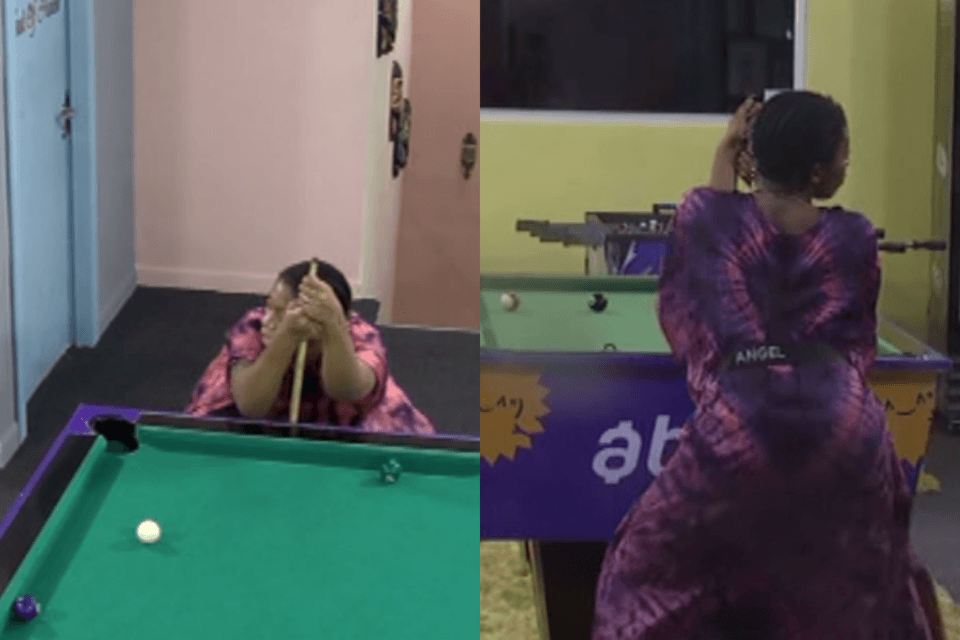 Cross had an intimate moment going through his photographs visibly reminiscing on old times. He took a long gaze at each picture before turning over to the next one. Pere walked in on him and teasingly asked, “What are you looking at? Are they Saskay’s pictures?” He responded that they were his and they proceeded to comment on how empty the Red room is now. Apparently, they used to leave the blue room to go hang out in the red room because it was fun and filled with some cool chicks.

In reflective moments after the Eviction Live Show, Cross told Pere that Saskay took her soap with her. There is a soap that they used “together”. Cross clarified that it was her soap which he had been using too for more than three weeks and he loved it. Pere advised him to think about requesting the soap from Big Brother if he loved it so much. We just need to put it out there that we are realising that Saskay was of a lot of value to some of her #BBNaija Housemates.

The struggle is real o!

Liquorose got herself busy with her hair. Earlier we saw how relieved she was to still have “Emma” around in the House but the reality of the show is hitting home. Now that Saskay (yes, her again) is gone, there aren’t enough dexterous individuals around in the #BBNaija House to fix hair and such.

It is back to the DIY days for the remaining Shine Ya Eye girls but at least Liquorose has been consistent with the self-braiding. While she was trying to get a crochet hairstyle together, Queen came to the rescue putting her hair rookie braiding skills to the test. She confessed to Liquorose that she had never done it before. She tried herself out and they broke into laughter at her cluelessness.  This turned into a short hair tutorial as Liquorose proceeded to braid her hair while Queen observed and later left for the kitchen.

Queen was complaining that there were no clean plates in the kitchen and Angel had not picked up her box from the kitchen. The mention of Angel took us back to the food fight and kitchen drama days in which Angel was involved. Could this be some kind of tension brewing among the remaining Shine Ya Eye geng? With the House shrinking, pent up tensions are bound to come to a burst and we wonder which corner we will hear the sound from.

Video
Who blocked who? – BBNaija
Whitemoney and Queen explain the miscommunication that prevented them from shipping after leaving Biggie’s House.
Video
EmmaRose explain their separation – BBNaija
Liquorose and Emmanuel explain how their relationship came crashing down after they left Biggie's House.
News
Day 48: Magical hair switch ups – BBNaija
Changing hairdos have been a constant this Shine Ya Eye Season.
News
Day 52: How are the Housemates feeling? – BBNaija
The Nominations brewed different expressions of emotions in the #BBNaija House.