Lots of love for Mungoma

Mungoma launched on #ZambeziMagic DStv CH 162 on the 19th of October 2020. This gripping new series promised a wild and drama-filled ride, backed by a powerful and intoxicating ingredient – premium local music.

This is what #ZMMungoma pledged to deliver and more. Check out the audience anticipation posts hailing the start of the show.

And when the special Watch Party episode premiered, hosted exclusively on the Zambezi Magic Facebook platform, the love and appreciation went through the roof! 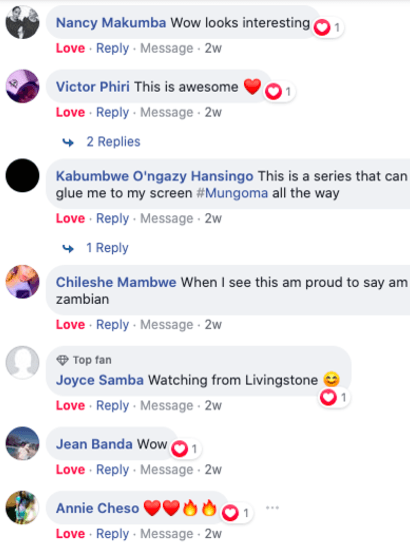 The official television premiere on Monday 19 October garnered some very special shout-outs from the grateful cast, who chimed in with some heartfelt messages of their own…

Thank you for the opportunity I’m excited to be part of such a great homemade production #zmmungoma 🙏🏾 https://t.co/zniGdXw4JF

In case you missed the start of Mungoma, have no fear, here’s what you need to know to catch up!

‘Mungoma’ means: inside a drum. When someone looks at a traditional African drum from the outside, they might assume that it will readily play the perfect song. What they may not expect is for that drum to have different emotions trapped within it. Songs of betrayal, songs of a perfect love, songs of loyalty, songs of ownership and songs of identity are all locked within its chambers.

MUNGOMA tells the story of a family that runs a successful enterprise called Mungoma Record Label. A business founded by a one-time musical celebrity Simba Kangwa, who passed the business to his daughter Naomi Kangwa when he passed, because she was his eldest child and he felt that as a musician she understood the business.

She managed the label for some years and recorded some hit songs, but her glory days were short-lived. Naomi quit her music career when she met and fell in love with Andrea Zulu at a bar where she was singing. It was love at first sight for Naomi. The couple married and had their first daughter Ruzivo Zulu. Naomi who had suffered two stillbirths prior, entrusted Mungoma Record Label into her husband’s hands, believing that he would run it better than she had and opting to focus on raising her young family.

Expansion and ambition are intrinsic to Andrea Zulu’s DNA, and so it was no surprise when a strategic marriage and business partnership was arranged between Ruzivo and Alex, the executive of a competing record label. With the partnership in place, it appeared that Mungoma Records was set to reach the sky.

But soon things started to unravel, and Zulu’s methods of intimidation; blackmail and witchcraft to stay at the top of the industry, began to emerge. The allegations were fuelled by Kangwa, Naomi’s brother, who made a determined effort to oust Zulu from the label he believed to belong to him by birthright.

Then Naomi was humiliated when she discovered Zulu’s numerous betrayals, and she ultimately decided to divorce him and kick him out of the company.

What to look forward to

But Zulu puts up a fight that ultimately reveals that he is not the only one with secrets…Naomi and Ruzivo have secrets of their own with far-reaching consequences for the Zulu family and their business.

You’re all caught up on #ZMMungoma! Don't forget to join us every Monday – Wednesday at 19:30hrs on #ZambeziMagic DStv CH 162 to see how the story unfolds.

Video
Zulu’s confession – Mungoma
Zulu confesses to being responsible for Chichi’s kidnapping and Naomi’s death now that her spirit is haunting him daily. Malaika, in desperate need for help, tells to Kangwa about her career worries.
Video
Revenge and interventions – Mungoma
Chichi fights for love and freedom from her parents, meanwhile, Andrea Zulu embarks on a journey of revenge for Mungoma.
News
Mungoma Season 2 to launch this August!
Zambezi Magic continues to deliver on its mandate of being the best in local storytelling with the launch of Mungoma Season 2.
Video
Teaser: The legacy of Mungoma Records
A family inherit a thriving record label, but everything soon starts to fall apart when ruthless methods of intimidation, blackmail and witchcraft employed to stay at the top of the industry emerge.