Bloods Psalms’ co-executive producer, writer and director Jahmil X Qubeka digs into the origins and inspirations of the series. 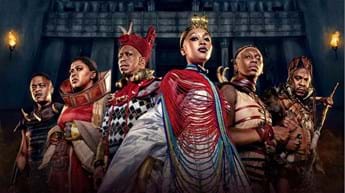 It’s been a month since Showmax’s Original show, Blood Psalms, launched and it went straight to number one. Set in ancient Africa, the fantasy series follows Princess Zazi (Bokang Phelane) as she attempts to rescue her people from a world-ending prophecy.

Throughout Blood Psalms, executive producer, writer and director, Jahmil XT Qubeka and his collaborators weave a tale of what might have happened to those fugitives, after they escaped with nothing but scraps of their civilizations.

Now, 1000 years after these survivors lost everything, how would they feel when all signs point to a new wave of devastation looming over them? “What would that do, collectively, to humanity to live through quite a few cycles of resetting civilization?” Jahmil asks.

Jahmil has some experience with monumental cultural reset. He was born in 1979 and grew up in East London, in Apartheid-era South Africa. As a child, he saw the world around him undergo a dramatic shift. “All of a sudden, this dead reality was crumbling in front of you,” he says, “So in me, there was a sense of ‘imagine if there were other possibilities!’”

In Jahmil’s lifetime of wondering about the history of his people – the Xhosa tribe – you can see Blood Psalms’ pulse start to beat. “Culturally, we have folklore and legend that is set outside of the time period we, as Southern Africans, have been given in regards to how to frame our history,” says Jahmil. “Scientists (like Professor Van Marle-Koster and Dr. Judith Sealy) traced our Nguni cattle all the way up to Sudan and what we term today Egypt, and even further to Libya and Mauritania. There are direct links between the people of the North and the South.”

Jahmil also researched evidence and records of great cataclysms in Northern Africa, like the desertification of the Sahara. In Blood Psalms, we might be getting hints about the African Climate Cycle, in which the tilt of the earth changes between 22° and 24.5°, leading to the desertification and greening of the Sahara. In episode two, the Chini matriarch, Mother Superior (Faniswa Yisa), stands at a sealed stone door covered in symbols. Studying the alignment of its symbols, she claims that they’re at the point in a 33,000-year circle at which everything is cleansed by fire…

The Chini are one of Jahmil and his collaborators’ most fascinating creations. “The Chini are the flotsam and jetsam of these tribes as they were going down (South from Kemet), whether they were sickly, whether they were cast out for not adhering to the order. They believe themselves to have turned their back on Kemet. Their way forward is the way of connecting with Mother Earth and its animalistic elements, and more natural elements. Deep down in their caves there’s actually a doorway or an ocean into the world of Sobek (the Egyptians’ crocodile god, the creator of the Nile, who brought order to the universe),” hints Jahmil.

The Chini’s scenes were filmed in the Sterkfontein complex, in the Cradle Of Humankind in Gauteng, where the Blood Psalms team was allowed to use a “dead” area of the caves where they wouldn’t damage biodiversity. They really entered another world to reach their set, over 20 metres underground. Within that space, you have the eerie physical performances of the Chini.

“I have to salute our collaborator, Albert Ibokwe Khoza (Blood Psalms’ language and cultural advisor and performance coach, who also plays Madlamini),” says Jahmil. “The Chini were hyenas, so we came up with the idea that their behaviour would mimic the animals that they transform into. Living underground, in constant hiding, would give them a certain kind of form, and then beyond the form, there will be the connection to the animal spirit. And that will permeate how they behave and how they talk,” says Jahmil.

Anywhere in Blood Psalms you choose to dig, you’ll find this kind of layering. It might be their end of days, but it’s the start of our obsession.

Did you know that if you’re a DStv subscriber, you pay even less (or nothing at all!) for Showmax? DStv Premium subscribers get Showmax for no extra cost, while DStv Compact Plus, Compact, Family and Access subscribers only pay R49 per month for Showmax.

Bloods Psalms’ co-executive producer, writer and director Jahmil X Qubeka digs into the origins and inspirations of the series.

Are they the players or the game? Meet key characters from the five tribes and royal houses.