The Busby quints and their mom, dad and sister are taking some big steps in a new season of OutDaughtered on RealTime (DStv channel 155) 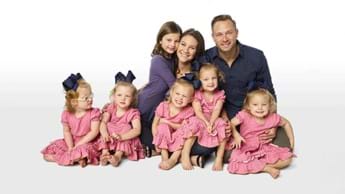 The Busby quintuplets are turning three this season and it’s a time of so many exciting developmental milestones. But it’s also grey-hair time for parents Adam and Danielle because with school looming on the horizon, they want to get these busy little girls potty trained. And when everybody has something to say about that, including big sister Blayke, it’s going to be a loud house.

The personalities are really starting to shine through. Ava Lane and Olivia Marie might be identical, but Olivia’s the escape artist. And out of their fraternal sisters, Hazel Grace, Riley Paige and Parker Kate, Riley is the one who’s starting to rule the roost from her throne as the tantrum queen of the house.

“She thinks everything is about her and she will not back down. She’s bossy, she’s the toughest, she will pick a fight, and she will win. She’ll get what she wants,” says dad Adam.

Danielle adds, “They’re so opinionated, and they’re little individuals [with] their own personalities and interests and likes and dislikes. Tantrums happen here and there because they can express what they want, but it doesn’t mean they always get what they want.” So yes, things are getting loud.

“We always laugh because if one of them asks you a question or if one of them gives you an answer, they’re all going to say it. Like, you’re going to hear it five times. It’s all day, every day. Everything gets repeated five times,” reveals Danielle. Big sister Blayke Louise is going to need to be fast on her feet to deal with this lot, so it’s a good thing she’s starting gymnastics lessons.

Getting those opinionated quints potty-trained is one of those complicated feats that really highlights the challenges of raising five toddlers who’re all going through developmental phases at their own pace. Imagine trying to reward one child who’s getting the idea, only to have four other little faces instantly turn to you for their own treat like clueless baby birds. But when you have to change around 30 nappies a day, boy, do you want that phase to be over. Mom and Dad are insanely busy even without that.

“From the second you wake up and get the girls up, it’s non-stop. Even when they’re napping, you’re continuously doing something for the house or the family, and that’s just how it is. I’ll get Blayke up for school about 7:15am and get on the bus, and then we get the girls up at about 8am, and it’s just the same Groundhog Day [the 1993 Bill Murray film in which his character re-lives the same day over and over] routine every day. You do bottles, milk, breakfast, get them dressed, play, they nap and that’s when I shower or do some laundry, constantly the dishwasher, constantly cooking or making food, constantly cleaning up, and they usually go to bed at about 7pm. Then you start the dishwasher for the night and start over again in the morning,” says Danielle.

This season, we’ll follow along with the Busbys as the girls dress up for Halloween (episode 1), celebrate Thanksgiving (episode 2), Christmas (episodes 5 and 6), New Year (episode 7), Valentine’s Day (episode 9), and April birthdays for all the girls, since Blayke was born on 5 April (turning 7) and the quints (turning 3) arrived on 8 April (episode 12).

Busby fans, you are not ready for this. Guess the theme of Blayke and the quints’ joint birthday party? Poop. It’s a poop party at a trampoline park. Danielle just went with it. “Blayke basically loves everything poop emoji. She had the idea of ‘don’t be a party pooper’. When we decided to join the birthday parties, we thought, ‘Well, the quints are three. And we’ve pretty much come to the end of potty training. So we’ll celebrate no more poop disasters.’ So, it just blended well with the don’t be a party pooper [theme].”

As the season draws to a close, Danielle and Adam also have to figure out how to take six little daughters on an aeroplane for a holiday trip to Hawaii.

“Prepping for a family of eight to go on vacation took weeks! All the planning around what do we bring!!!! AHHHHH!!! How do we keep six kids occupied on a plane for 8+ hours, airport layovers, jet lag, sleeping situations, transportations… car seats and a van big enough to transport us, how many bags can/should I bring, snacks… the list goes on!” Danielle wrote on their blog.

And if you’re wondering how to get your little zoo on a plane, watch the episode, then click that link and check out Danielle’s travel tips for moms. She even mails bulkier items like the kids’ water safety equipment to their hotel in advance.

RealTime is available on all DStv packages. To get DStv, click here

With 3 months to explore their relationship and plan a wedding, Tarik and Hazel work through their issues in S8 of 90 Day Fiancé on TLC (DStv channel 135)

Welcome to the DStv Family this March

DStv Family welcomes new Korean channel tVN (DStv channel 134) along with reality family drama from Zodwa Wabantu to Madam & Mercy, and so much more this March

DStv Access is inviting the likes of Dr. Now, Madam & Mercy and John Wick into your home this March