The king of the jungle heads for Boomerang 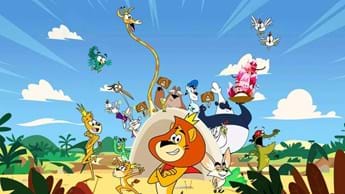 The lion is the undisputed King of The Jungle… aaallllmost. Hold your paws and your applause because in the Kingdom of The Animals, every 1 000 years the lion’s crown is up for grabs. When that happens, for an entire 365 days, Lion King Kikoumba must match wits, strength and sheer cunning with every single animal in his kingdom who’d like to take his throne. And a new animal has the right to go head-to-head with Kikoumba in a new series of challenges each day.

If Kikoumba loses, he has to leave behind his cushy lifestyle on the warm savannah, lazing under a tree and stuffing his face while his rhino guards keep watch, pack his tail between his legs and go back to where he came from – his ancestral lands in the barren, snowy wastes of Mount Kilimanjaro.

But Kikoumba doesn’t just want to win for himself, his wife and son are watching. So are the judges, Clodomir the bear, Vindaloo the tiger and Habiba the giraffe. And Kikoumba’s snide and malcontent master of ceremonies, Khamsin the fennec fox with his gigantic ears, snickering laugh and little black boots, makes no secret of the fact that he’d love for anyone else to take over the throne.

It’s all happening in the animated series, Kikoumba S1 on Boomerang (DStv 302) this March (a French production dubbed into English).

Here are just a week’s worth of the fearsome opponents that Kikoumba will face – 7 days, 7 shocking challengers:

This kung-fu champ has perfect form, a scream that can slice fruit and she’s filled with a powerful rage whenever anyone implies that she is a you-know (whispers) chicken. Feathers will fly and eggs will roll.

This gossipy hairdressing heron is the most celebrated stylist on the savannah. With his bill, he can scissor, tweak and fluff until any client looks simply magnificent. Kikoumba, meanwhile, doesn’t even know what a comb is and his mane is full of twigs.

This golf-playing heron is absurdly poised and demonstrates his perfect sense of balance as he stands on one leg and swings his golf club with the other. But King Kikoumba knows just where this country club snob is under par – Nicklaus is a germaphobe. He can’t stand dirt and his ball-polishing cloth could really be acting as a security blanket.

Kikoumba faces off against an unexpected opponent in this episode – Clodomir the bear. That’s right, one of the judges is challenging the king to feats of chivalry, bravery and gallantry. Aside from having fleas, what could sleepy Clodomir’s weaknesses be?

This diva octopus is one of the best acts in the circus with eight arms at her service to juggle starfish. But her real skill is in charming her guests, and the judges soon fall prey to her generosity, agility, sense of humour and skills as a mimic. But she should watch her step before she gets carried away by those eight frisky legs. Certain animals don’t like being made fun of.

Kikoumba likes sport if you mean a little casual soccer, just kicking the ball about. But Berengere the black panther is a cat of a different colour. She’s a born athlete and believes she’s unbeatable on grass, sand and clay. She can jump higher, run faster and lift more than Kikoumba. King, what are you going to do?

Houdino, the cool and collected rabbit magician, and his lovely assistant, Melusine the dove, are a fearsome double act with plenty of tricks up their sleeves. But when Kikoumba discovers that Melusine has lost her heart to Houdino, he realises that he could save his crown if he can pull a rabbit out of the hat for her, as they say.

With plenty more contenders to come and episodes filled with animal battles, sneaky puns and nods to real-life animals’ special skills, the real winner of every Crown Down battle will be the kids watching at home.

Boomerang is available on DStv Premium, Compact Plus, Compact and Family. To upgrade your package or to get DStv, click here.

How to grow a Mushable

So much more Tom & Jerry on DStv this March

Get ready for new episodes of The Tom & Jerry Show, plus two brand-new Tom & Jerry movies! It’s all coming to Boomerang (DStv channel 302) this month.

Welcome to the DStv Family this March

DStv Family welcomes new Korean channel tVN (DStv channel 134) along with reality family drama from Zodwa Wabantu to Madam & Mercy, and so much more this March