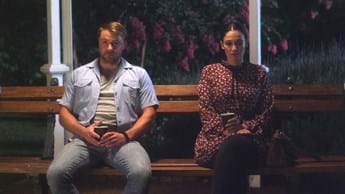 Since the start of the year, kykNET (DStv channel 144) has offered viewers a variety of local TV movies called “storiefilms”. From drama to comedy, we have seen it all with some well-known faces starring in the movies, including Jacques Bessenger (Adrian in the original local drama, Lioness) and Afrikaans veteran actor Phillip Moolman (Boeta van der Spuy in Tjops vir Brekvis).

On Sunday, 14 March, a brand-new storiefilm titled Die Smaak van Saffraan will steal your heart. This film looks at how people cope with loss and grief following a traumatic incident, and its message is that there is always hope.

As with the other storiefilms, Die Smaak van Saffraan features top-notch talent and Viljé Maritz (presenter on the lifestyle show Fiësta) and Monique Rockman (Joy in the Afrikaans soapie, Suidooster) shimmer on screen along with a special canine friend named Flirt.

What it’s all about

Viljé’s character, Rudi van Rooyen, is a farmer whose whole world has been turned upside down after the death of his wife and daughter in a farm attack. “He has lost his faith and even writes off his family and friends,” says Viljé. “He struggles to open up about this tragic event and how it affected him.”

Rudi has no interest in talking about his loss, that is until he meets Kimberly (Monique’s character) at a support group filled with people who have experienced similar traumas to his own. And slowly, Rudi starts to heal.

Kimberly is a veterinarian, and her husband and son were taken away from her by hijackers. “Kimberly and her family moved to the countryside because they longed for a simpler life than what they had in the city,” says Monique. “It’s quite peculiar that her hubby and son then get hijacked in the driveway of their country home and die at the hands of criminals who just wanted the car,” adds Monique.

Kimberly and Rudi help each other deal with their grief

Producer Francois Nolte says he knows that farm attacks and hijackings are hot topics in South Africa but in this film, he and his team didn’t want to make that the focus. Instead, they wanted to tell a story about how people handle the trauma, loss and grief that comes after.

“We don’t show the attack and hijacking, the story picks up after these events,” explains Francois. “The main theme in this movie is that we want to show the viewer that you are not alone when tragedy hits you. You don’t have to go through it alone, there is support out there, whether it be friends, family or a support group. There is always hope.”

The floral spice of saffron (aka saffraan in Afrikaans) is significant to the movie as it holds a special memory for Rudi. “It reminds him of his wife and how Rudi would make a dish for her with saffron for special occasions. There is even a scene in the movie where Rudi says, "I miss the aroma of saffron," and that is where you see the true emotions of how hard it is to grieve alone and not allow people to help you,” says Viljé.

A unique part of this film is the role played by Rudi’s daughter’s dog, Chester. The beautiful golden retriever, Flirt, plays the doggy role and the 6-year-old pooch made quite an impact on the cast and crew.

“It was quite a process finding the right dog for the story, as well as conveying the most truthful companion to our lead character, Rudi,” says production manager Adri Britz. “In the story, Chester had to fit the picture of a little girl’s dog with a certain charm/softness to make it believable.”

At first, Adri and her team came across a Rottweiler that was amazing, but producer Francois felt that it wasn’t believable as a little girl’s dog.

“From there, we went to an actual animal agency called Tailsup that suggested Flirt, and as soon as we saw a photo, we were hooked,” says Adri.

“Having a dog on set comes with specific challenges, and we had to adhere to all the rules,” explains Adri. “For instance, all the paperwork and certificates to use an animal on a film set needed to be in place. And that is where Flirt’s owner and handler, Estene Trollip, came to our rescue.”

Estene explains that by law you must have a PAPA (Performance Animals Protection Amendment) licence and a representative of the SPCA on set when filming with an animal. “It’s important to ensure the wellbeing of the animal, and there are also strict rules when it comes to how long you are permitted to film with a dog. The max is 6 hours a day and we never go more than that ever.”

“Also in the story, we had to shoot a scene where Rudi comes home only to find Chester not moving as [in the story] he gets bitten by a snake,” says Estene. “Things can get tricky in those sorts of scenes because the dog can get excited when humans come near and get up, but Flirt pulled off ‘lying still’ like a champ,” she says proudly.

Estene says Flirt is most happy when she plays in water

kykNET (DStv channel 144) is available on DStv Premium and DStv Compact Plus. To get DStv or to upgrade your package, click here.

How far would you go to protect your children?

The thrilling South African drama, Lioness, sees a woman lose her children, lover and freedom when she is framed for a fraud committed by her husband before his death. Watch it on M-Net (DStv 101).

A time jump, a funeral and a midlife crisis, but Die Boekklub S3 is all about that golden thread of hope