What to Watch on DStv Kids in June 2022 | Highlights

Holiday destinations for Kids on DStv

Send your kids on an imagination vacation! Destinations include Atlantis, Wonderland, dragon filled Huttsgalor, the planet Bhilka, or they can even take a time trip! 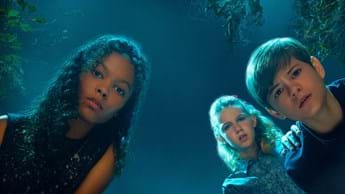 The big school break is coming up on Friday, 24 June, and DStv’s Monstie the big, fuzzy purple friend has dug up all sorts of treasure for your little monsters. Whether you’re on the road or staying home, DStv is filled with fun holiday destinations for busy imaginations.

Disney’s Alice’s Wonderland Bakery is a feast of songs and dances in a place where anything can happen. The How To Train Your Dragon team has created a special series for the little ones filled with adorable talking young and baby dragons in Dragons Rescue Riders. The kids will also get an alien perspective on Earth while meeting all sorts of weird creatures on planet Bhilka in Superhero Sprinter Galore. Older children can visit the American South during segregation in the mystery-fantasy-time travel series Secrets Of Sulphur Springs. and Aquaman: King Of Atlantis is an endlessly imaginative and funny look at life under the waves.

So much to see and to know, so many places to go! School is on pause but learning never stops on DStv Kids.

Baby it’s better, down where it’s wetter? Well, that’s debatable for Aquaman, the new King of Atlantis in this 3-episode animated comedy mini-series. Aquaman comes from the human world so he’s diving in at the deep end when it comes to ruling his watery kingdom. But he has the trident. That has to count for something, right? Maybe he can use it to poke the former King of Atlantis, his brother Ocean Master, when that scaly piece of flotsam comes knocking.

Watch Aquaman: King Of Atlantis Season 1 from Saturday, 2 July at 10:10 on Cartoon Network

10-year-old Viking twins Dak and Leyla have our dream job: They spend their days rescuing dragons around the town of Huttsgalor. The animated adventure series is a spinoff from the How To Train Your Dragon movie series, but Dak and Leyla were raised by a mother dragon, so they have dragon friends and can speak their language – and that means we get to find out what the dragons are thinking, too. Expect wicked, sneaky slinkwings, and loads of little hatchling dragons. If you’re desperate to get your kids to watch anything other than Paw Patrol, try this, it has a similar rescue adventure vibe. The toy line is pretty adorable, too.

If your favourite part of Alice In Wonderland was the Mad Hatter’s Tea Party, you’ll love watching this imaginative, singing, dancing animated series with your kids. The Alice in this show is the great granddaughter of the original Alice, and she’s now free to explore Wonderland while working at the kingdom’s teapot shaped bakery. Fantasy rules are in effect, so you can float through the pantry, the Cheshire cat comes round for a nibble, and the desserts turn out magical… just not in a grownup way (wink)! PS: education is a secret ingredient, as Alice’s recipe measurements aim at helping kids learn how to count.

Sprinter Galore is an alien superhero who gets kids aged 2-6 to wonder, “Are you still a hero if you ask people for help?” Sprinter’s life changes course when he crash-lands in a Danish family’s garden, and they invite him to stay and find out how Earth works. He then takes that knowledge back to his planet to help his own people to solve problems. This season’s lessons include sandbox etiquette, there’s a battle of the bands episode, and Sprinter tries to help the mayor.

Our spooky favourite is back… in time. It’s the best live action, ghost hunting, time travelling and mystery series for tweens on TV! Griffin (Preston Oliver) and Harper (Kyliegh Curran) have new secrets to unlock in the eerie, haunted Tremont hotel. Harper follows one of the ghosts back in time to the 1930s and uncovers a family secret that brings her face-to-face with her ancestors. But when she’s stranded at the wrong end of time, swapping places with her own grandmother, she gets to experience life for black people in the segregated American South.

More fun for kids on DStv this June