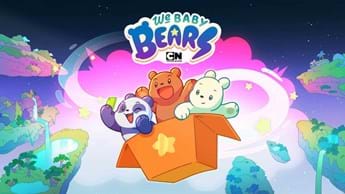 You’ve seen their series, watched the movie, and now Cartoon Network (DStv Channel 301) is bringing us the We Baby Bears Season 1 experience. Chill Ice Bear, friendly and adventurous Grizz and adorable social media-obsessed Panda are 3 little baby bears, alone in the world and searching for a place to call home (awww). They wish upon a magic star, which turns their cardboard moving box into a magical transporter that can take them anywhere in the universe, from a land of giants in the clouds, to a pirate ship, to a fairy land, to the house of Baba Yaga. Alas, sometimes the box gets the wrong idea of what home should be!

PS remember, your kids will meet some of their favourite characters like the Baby Bears when they play and learn with DStv Island Adventures, free to all parents via the MyDStv app.

What would you do if you suddenly had the 3 Baby Bears in your home?

Mikey: “I don't know. They're pretty unruly. I feel like there'd be some 11-minute mishap where they ruin my home, but then learn the important lesson on the way so I probably let them stay after.”

Christina: “Yeah, I could see a turf war break out between my dogs and the bears, but I think it would also be really fun to sit around on the couch with them. I feel like they're down to talk about anything for pretty entertaining. At this point, I know them pretty well. So maybe I am the person for them to stay with.”

Why did you want a narrator for the series?

Mikey: “The choice was to give it this storybook feel and to further separate it from the old show, to show this is its own thing. It has its own framing device. And it's sometimes, really, because they're in a new world in every episode. It can be very helpful to have a narrator give up some exposition, which can often be kind of cumbersome. It's a nice, quick way to get through it.”

Your narrator is Demetri Martin, who’s the voice of the original series Ice Bear. Is that a little easter egg for the fans?

Mikey: “We were thinking of people who could narrate. And it just felt like as much as this show is its own thing and has its own continuity, in a whole new style, we thought having Demetri be the narrator felt like a fun nod to the old show. He was such a hit on We Bare Bears, and we thought maybe he could help us in a new way on this new show.”

The show has a beautiful anime aesthetic. What was it like to be surrounded by that while you were working on the series?

Mikey: “Our art director, Valerie (Schwartz), really makes the episodes come to life. Often when we write the scripts, it's like a vacuum. We don't know anything it's going to truly look like but after we see Christina do visual development, and then the rest of the art team kind of brings everything to life, it's just very inspiring and usually inspires more stories.”

Christina: “We really wanted to grab the opportunity to do something new. We knew that we wanted the characters to express themselves in different ways and so this called for a stylistic departure from the methods we were using before. A lot of the crew are also really attached to anime as many of us grew up watching it and we felt strongly about being able to pay homage to it.”

What’s 1 of your favourite places that the box takes the bears to?

Mikey: “1 of my favourite places is Bug City (Bug City Sleuths, episode 10). It's a very large, bug-populated city, but it's also quite kind of Noir themed. And that's so far been 1 of my favourites. I really like that 1. It's very funny.”

Christina: “For me, I think it was underwater (The Little Mer-Bear, episode 4). I mean, provided that if I was able to breathe underwater. It was just really colourful, really cute. The ocean was like their new playground for the Bears.”

Mikey: “Being able to explore new worlds has provided us with the opportunity to see different worlds which are culturally inspired by reality and incorporate those similar messages that you see in We Bare Bears. A fun episode to work on was Fiesta Day, which is a Mexican-inspired story which our showrunner Manny Hernandez put a lot of love into to ensure the little details rang true.”

Panda is social media obsessed. How did you find a way to present something like that to very young children?

Mikey: “Panda in the show is very, very media, very social media obsessed. He always has his eyes glued to his phone. And I think anything related to social media or with one's phone is just kind of part of everyday life, even for kids now. It wasn't the case when I was kid. But I think we just want to be true to this aspect of a kid's life that sometimes they have their phone and sometimes something will unfold from there. We don't want to just pretend that's not what the reality of today”

What aspect of the show caused the most back-and-forth during pre-production?

Mikey: “There was a lot of discussion when we were first brainstorming how this show worked, about how they transported from world to world. For a while, there wasn't a magic box. I kept pitching hot air balloons, or maybe they had a magic device, or maybe in the box they could live inside of, there's some sort of room in there. Ultimately, you just figure out what works best. I think we landed on that, with them just being in the box, like they're just little kids playing around, but that box being magic and going place to place.”

What dream or fantasy adventure that's made it to the show is closest to your heart?

Mikey: “They get into so many crazy situations; I don't know if I've ever been in any of the situations. In We Bare Bears, there are situations where it’s so slice of life, we often told them right from our lives, we used both our childhood and our adult lives for stories. But this 1, we really have to think outside the box of where they might be in what situation they get into. But the internal conflicts are usually where we put ourselves into it, whether it's a story where 1 bear is jealous of their brother, or someone gets embarrassed or someone is afraid. And that's kind of those emotional stories are usually what we relate to most.”

Christina: “I haven't been underwater that much, but it's about these bears, and just through the luck of the universe, they find each other. And they're just looking for a home, to see where they match the most. That journey doesn't mean it's always going to be bad because they fail, but they find ways to learn stuff along the way, to make it worthwhile.”

Where & when to watch!

Also watch out for