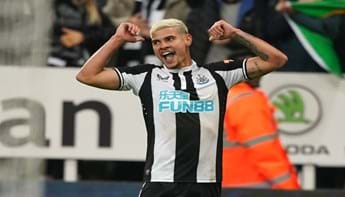 One of the players who will be looking to light up the Premier League from next season and take major momentum into the 2022 FIFA World Cup is Brazilian midfielder Bruno Guimaraes.

The 24-year-old was the headline signing for Newcastle United in the January transfer window, joining from Olympique Lyon in a deal worth a reported £40m, the highest fee paid since the club's new Saudi Arabian-led ownership took charge.

The midfielder was gradually introduced into the Magpies line-up, but by the end of the campaign he had shown his class with a return of five goals and one assist from 17 appearances.

Guimaraes has now admitted that his decision to leave Lyon in January was “one of the hardest” he has made:

“I think I went about four days without sleep. I’m not going to lie, I was afraid, yes,” said the player who started his career with Brazilian clubs Audax and Athletico Paranaense.

“Even more so because the club was in the relegation zone. But after I got there and did my first workout, confidence went up again. After I started playing, everything started to work out, we ended up in 11th, a team that was second to last.

“The best decision of my life was to go to Newcastle, to the Premier League, I believe it may have been a differential in my call-ups too.”

Indeed, Guimaraes played in Brazil’s final three qualifiers for the 2022 FIFA World Cup against Paraguay, Chile and Bolivia. He is hopeful that a starring role in “the hardest league in the world” will help him retain his place in the national team set-up.

“Every game in the Premier League is difficult, there are no easy games, we see the last winning the first sometimes, it’s a very difficult championship, at a very high intensity,” he explained.

“As much as I played in Ligue 1, when I went to the Premier League I felt the intensity in the first three games a lot. It’s very different, the hardest league in the world, it’s very difficult to play, but it’s the league I always wanted to be in, I think every player could play at least a year in the Premier League to see that it’s different.”

No rival can compete with SuperSport’s coverage. Our viewers on DStv  enjoy an unrivalled selection of football from around the world!

Don’t miss the New Football Season on SuperSport on DStv and GOtv. And while you’re on the move, you can stream matches on the DStv App.