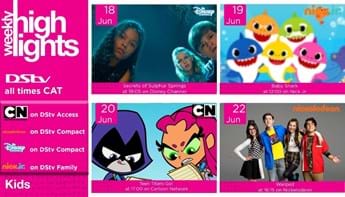 Sunday 19 June at 20:00 on Mzansi Magic, available on DStv Compact, Compact Plus & Premium

A tale of secrets, lies and deceit. Will this family survive when everything hidden is brought to the light?

Monday 20 June at 20:30 on OneZed, available on DStv Compact, Compact Plus & Premium

Mpali is a story that revolves around Nguzu, who has six wives. Nguzu’s home appears to be peaceful until he marries Tamara, his sixth and youngest wife. All hell breaks loose as the other wives start feeling intimidated and neglected.

Tuesday 21 June at 21:30 on Zambezi Magic, available on DStv Compact, Compact Plus & Premium

Thursday 23 June at 21:30 on Moja Love, available on DStv Compact, Compact Plus & Premium

‘Ekhaya’, hosted by Siyabonga Mdlalose, highlights the issues around property ownership. Property disputes are a common occurrence in our communities. Since greed is a great leveller, wars over property take place across the strata, from low-income households to ultra-rich families.

Revenge, war, duty, honour, love, lust and destiny are the order of the day for the people of Ocholuje, as they learn to survive after uncovering some bitter truths once buried in the past.

My Siblings and I

Follow the hilarious antics and heated conflicts in the Aberuagba family as seen through the eyes of the youngest sibling, Angela.

Three friends have been unlucky with love and now, Kamsi, Nengi and Funbi lean on each other as they navigate through life, love and success.

A woman's quest for vengeance uncovers a world of scandal, secrets, lies and betrayal. Will vengeance be the means to an end or the very end itself?

What happens when a clever conman ends up in a position of influence and power that turns out to be more than he bargained for? ‘The Kojja’, an offbeat new comedy, will explore this scenario.

Monday 20 June at 19:30 on Maisha Magic Plus, available on DStv Compact, Compact Plus & Premium

‘Salem’ is a story about inequality, about the poor, and the rich. And about how fine the line between the two can be.

Wednesday 22 June at 16:30 on Maisha Magic Bongo, available on DStv Access, Family, Compact, Compact Plus & Premium and up

Professor Bill is a dubious man who uses people for his own selfish means but things take a turn when an even more sinister character enters his life.

Thursday 23 June at 20:00 on Pearl Magic Prime, available on DStv Compact and up

A comedy series that portrays what goes on between the land lord Kabogozza and his tenants, especially Sam who becomes his sidekick.

Friday 17 to Sunday 19 June at 17:00 on SuperSport Golf, available on DStv Premium

The third golf Major of the year 2022 will be the U.S. Open, played at The Country Club in Brookline, Massachusetts.

Sunday 19 June at 01:00 on SuperSport Action, available on DStv Compact Plus, Compact & Premium

The UFC will continue with a Fight Night at the Moody Center in Austin, Texas, headlined by a featherweight match between Calvin Kattar and Josh Emmett.

Sunday 19 June at 14:00 on SuperSport Motorsport, available on DStv Premium

The 10th round of the 2022 MotoGP World Championship will be the Grand Prix of Germany, held at the Sachsenring in Hohenstein-Ernstthal.

Sunday 19 June at 20:00 on SuperSport Motorsport, available on DStv Premium

The ninth round of the 2022 Formula 1 World Championship is the Canadian Grand Prix, held at the Circuit Gilles Villeneuve in Montreal.

The Chicago Cubs will look to get one over the Atlanta Braves when they meet for a Major League Baseball clash on Friday evening.

The Los Angeles Dodgers will look to get one over the Cleveland Guardians when they meet for a Major League Baseball clash on Sunday evening.

Friday 17 June at 20:20 on Studio Universal, available on DStv Compact and up

Princess Diana of an all-female Amazonian race rescues US pilot Steve. Upon learning of a war, she ventures into the world of men to stop Ares, the god of war, from destroying mankind. Starring Gal Gadot and Chris Pine, directed by Patty Jenkins.

Carol Peters, a young unemployed woman, finds her life changed when an artificial intelligence entity chooses her as a guinea pig for an experiment that will decide the future of humanity. Starring melissa McCarthy and Bobby Cannavale, directed by Ben Falcone.

How To Train Your Dragon 2

Hiccup and Toothless are faced with the threat of Drago, a dragon trapper, bent on capturing and dominating over all dragons. However, they are determined to defeat him and restore peace on Berk. Starring Jay Baruchel and America Ferrera, directed by Dean DeBlois.

Rescued as a child by the legendary assassin Moody, Anna is the world's most skilled contract killer. However, when Moody is brutally killed, she vows revenge for the man who taught her everything she knows. Starring Maggie Q and Samuel L. Jackson, directed by Martin Campbell.

Monday 20 June at 16:30 on TLNovelas, available on DStv Family and up

My Heart Beats for Lola

Tuesday 21 June at 15:20 on Telemundo, available on DStv Access and up

‘My Heart Beats for Lola’  tells the love story of Lola (Carmen Villalobos) and Andrés (Jencarlos Canela), two young people who have loved each other since they were children.

Wednesday 22 June at 17:00 on Zee World, available on DStv Access and up

Based in Bhopal, Yash Scindia is a wealthy widower living with his two daughters Payal and Palak. Aarti is a divorcee and lives with her son Anash.

Thursday 23 June at 22:00 on Star Life, available on DStv Family and up

Anupamaa, who parts with her ambitions and goals in a bid to raise her family, feels dejected when she fails to get any credit for her sacrifices and trials. She then decides to live on her own terms.

Saturday 18 June at 19:05 on Disney Channel, available on DStv Compact and up

Griffin moves to a seemingly haunted town named Sulphur Springs with his family. He meets Harper, a girl from school, and they unlock a time-travelling portal and encounter a lurking ghost.

Baby Shark and his best friend, William, embark on fun-filled adventures in their community of Carnivore Cove.

Monday 20 June at 17:00 on Cartoon Network, available on DStv Access and up

The superheroes Robin, Cyborg, Starfire, Raven and Beast Boy love saving the world. But after they decide to stop fighting crime, things do not go as planned.

Wednesday 22 June at 16:15 on Nickelodeon, available on DStv Compact Plus and up

Milo, the beloved head geek at a comic book shop, finds his world disrupted after his boss hires the quirky and excitable Ruby.

A Marine combat veteran struggling to readjust to civilian life in Ohio finds friendship in Al, the interpreter who served with his unit in Afghanistan and has just arrived to start a new life in America.

Story of the Spitfire

Sunday 19 June at 21:05 on History Channel, available on DStv Compact Plus and up

When the Spitfire first flew in March 1936, few would have imagined that some examples would still be fl ying nearly 80 years later. Its role during the Battle of Britain ensured its legendary status that has continued down the generations. Today whenever a Spitfire flies overhead, eyes turn skywards and the hearts of both young and old beat a little faster.

GameStop: Rise of the Players

Sunday 19 June at 21:45 on Discovery Channel, available on DStv Premium

Tuesday 21 June at 20:00 on BBC Lifestyle, available on DStv Compact and up

The series is set to follow an Apprentice-style format in which 12 food and drink entrepreneurs battle it out to win a life-changing investment.

Ruby Walker, a junior doctor, comes to India looking for a job. Meanwhile, she enjoys the nature and finds true love at an under-resourced cottage hospital.

A seemingly ordinary British couple become the focus of an extraordinary investigation when two dead bodies are discovered in the back garden of a house in England.

Hosted by acclaimed chef Eric Adjepong, 15 brave and talented chefs attempt to take down Iron Chef Alex Guarnaschelli, one of the most feared and accomplished competition cooks in America.

A look inside the investigative minds of five American detectives as they re-examine the harrowing cases that defined their careers. 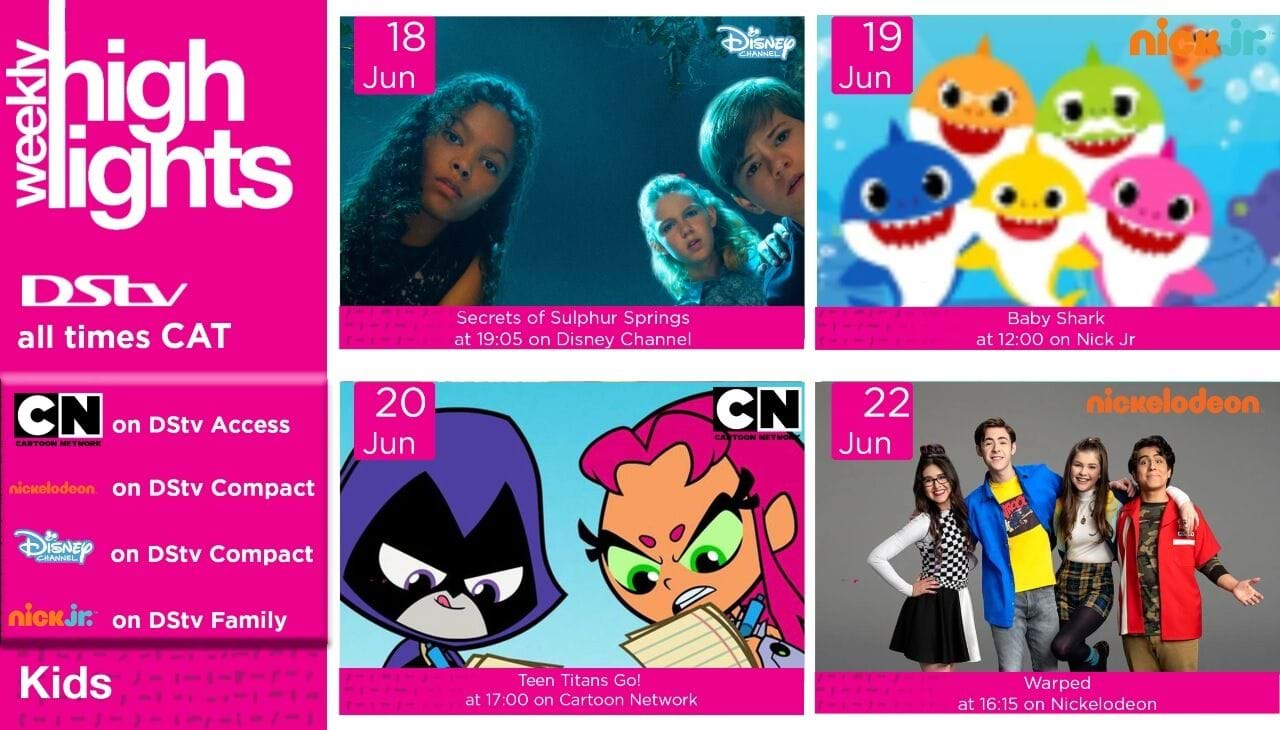