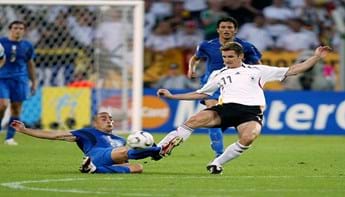 When a defender ruled the football world

Since the turn of the century, only one defender has been awarded the prestigious Ballon d’Or for being the best football player in the world in a particular year. In 2006, on the back of Italy’s triumph at the FIFA World Cup in Germany, centre-back Fabio Cannavaro received that honour.

Standing just 1.76m (5ft 9in) tall, Cannavaro was not an imposing defender, but his sense of anticipation, timing in the challenge and sheer bravery made him an obstinate opponent for any attacker.

And the Naples-born defender put in the performance of his career in the semifinal of the 2006 tournament, when the Azzurri and hosts Germany had a thrilling battle that lasted 120 breathless minutes and was decided by late, late goals from Fabio Grosso and Alessandro Del Piero to see the team in blue triumph 2-0.

“It was an extraordinary game, played at such a high level. When I see the intervention back, I ask myself ‘was that really me doing it?” Cannavaro has modestly reflected in the years since the Azzurri’s victory.

He added, “The key moment for me was when we came out onto the pitch. All the German players were tall and focused, but none of them looked you in the eye – everyone was looking down.

“When it was done I said to Buffon, ‘Gigi, we’ve already won this’. And he looked at me and asked, ‘how so Fabio?’. I replied, ‘Because they’re at home, they have the entire crowd behind them, but they’re afraid.”

Cannavaro’s performances in Germany earned him the nickname ‘Il Muro di Berlino" (‘The Berlin Wall’), as Italy kept five clean sheets and conceded only two goals, neither of which were in open play.

Italy ultimately triumphed in the final against France, taking the title on penalties after a match which is best remembered for Zinedine Zidane’s head-butt on Cannavaro’s central defensive partner, Marco Materazzi.

The centre-back, who played for the likes of Napoli, Parma, Internazionale, Juventus and Real Madrid in a glittering club career – as well as accumulating 136 caps for the Azzurri – was voted as the Ballon d’Or winner later in the year, finishing ahead of international teammate Buffon and French forward Thierry Henry.

In doing so, Cannavaro became just the third defender in history to win the ‘best player in the world’ award, joining (ironically) Germans Franz Beckenbauer (1972 & 1976) and Matthias Sammer (1996).

Don’t miss the New Football Season on SuperSport on DStv and GOtv. Visit www.dstv.com to subscribe or upgrade and join in on the excitement. And while you’re on the move, you can stream matches on the DStv App.