News
01 October 2021
Present fathers can be a pivotal part to how an individual turns out. Some of the geng however, did not get this privilege and they feel some way about it.
Subscribe to watch

A lot of people rely on connections with their parents to learn and grow in knowledge during their formative years. Unfortunately, some people do not get to have that chance with either a parent or both – and this can be quite difficult for a few.

Two of the “Shine Ya Eye” geng have been through this and shared their stories with one another. In a discussion at the dining area, Pere and Whitemoney shared information about how they both did not grow up with their dads and how it affected them.

Whitemoney went first saying he vaguely remembered his dad, but remembers him having a lot of cars. He claims he was a pharmacist who made his money by growing to the top in his career. He also said that the only father figure he had was his grandfather who got him rooted in his culture. Whitemoney insisted that after the show, himself and his older brother would go in search of their father and even if his father does not show him the love he expects, he will still give him a hug and forgive him for abandoning him and his siblings.

Whitemoney went further claiming voodoo was involved in his father’s refusal to take care of him, his siblings and their mother. He was however insistent that he would use all means to make sure his father sees reason with him.

Pere also tabled his issues with his father and revealed his father left the family when he was four years old. For the longest time, the only memories he had of his father were from photos his mother showed him. He finally met his father when he was 24 years old and living in the United States of America. According to his narrative, the first place he stayed when he got to the USA was with a couple who were mutual friends of both his parents. He narrated that on a particular day, the daughter of the couple who housed him came into his room to inform him that his father was in the House.

He was a bit nervous and then walked into the living room to meet the man. "The man goes hey young man, you have grown a lot since I last saw you.” They both hugged after this, but the story did not turn out rosy as Pere claims they had altercations because his father tried to exert his authority on him. This he could not take because he was already a grown man with his own opinions.

Cross, who was also at the table while all of this happened, chipped in to speak about his own dad and his doggedness that earned him a place in Cross’ mother's heart. According to his narrative, his mother was considered a strong headed woman who refused to settle with just any man. She had just returned from a failed engagement when she met Cross’ dad. According to Cross, his mother was coming from the stream with a few of her friends when the man who would become her husband met them on the road and asked after their well being. This did not go down well with her for some reason and she threw water at him.😂 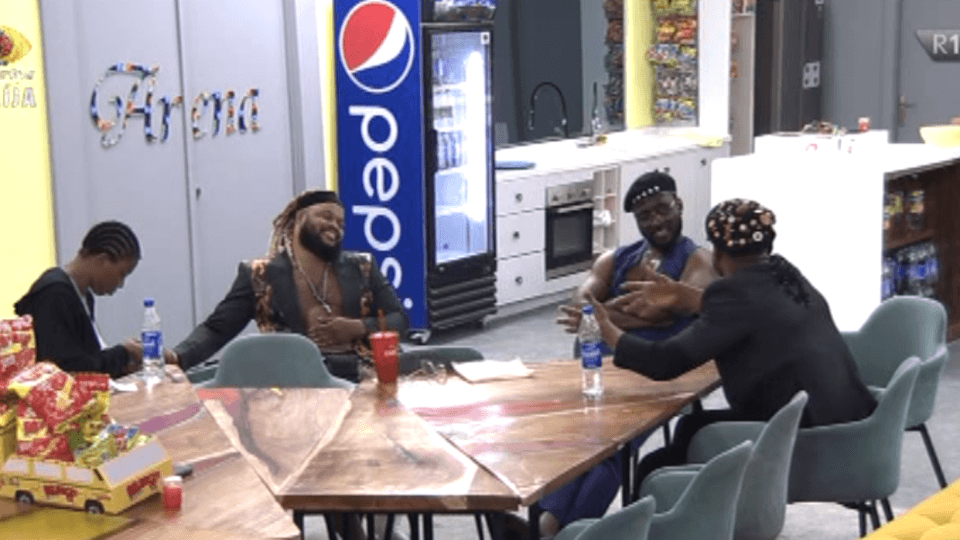 However this man did not give up. Talk about a man who knows what he wants.💪

Anyway this story ended well because after a good ole chase, his mother gave in and married his father.

We like it when the Housemates give us access to their personal lives because it makes us understand their reason for taking certain actions. Well stick around, the fun is not over. We know more juicy gist will be brought to you courtesy of the Housemates.

Video
Last round with EmmaRose – BBNaija
Tega confronts Pere about his lack of support for her. Cross apologises to Saskay and EmmaRose explain their relationship one last time.
Video
Tega and Boma come clean – BBNaija
While Tega explains her marital status and the perceived scandal between her and Boma, things between Beatrice and Maria become almost physical.
Video
Day 69: The Chef making Task – BBNaija
The six BBNaija finalists put their cooking skills to the test as the Tribe Nigeria and Amazon farms Task gave them an unforgettable Kitchen experience.
News
Day 69: The long road to musical glory – BBNaija
Everyone has a reason behind their stay in the House and a backstory that has shaped their life's journey.