News
18 September 2021
From modelling to acting, archery and charades, the BBNaija geng had a swell time executing the Patricia Task.
Subscribe to watch

The Housemates had an amazing time executing interesting activities from Patricia. The first item on their to-do list was modelling outfits, and they made quite a good impression.

The Fashion Show
The Housemates got into trendy outfits from RooomXIX outfits for today's Patricia Task. RooomXIX is a luxury fashion and lifestyle themed store owned by Patricia Universe retailing globally curated products for the style-conscious.

Soon as the buzzer went off, each Housemate strutted to the centre stage to show off their Room XIX outfits. They did not just show off but described their streetwear fashion to fellow housemates so they could understand their style and why their outfits perfectly depicted their personalities. The Housemates demonstrated that they were trendy, fashionable, urban and stylish.

On to the next

For the next rounds of activities, the Housemates were divided into two teams and each team consisted of five members.

Pere was the Housemate who picked the ‘Umpire’ card and became Big Brother’s assistant to serve as an umpire for all the activities.

The Crypto Charade
The next activity was the Crypto Charades. Each team had a total of nine rounds of charades. Each team representative got four verbal clues and team members had only 60 seconds to guess each word. Cross represented Team Bitcoin and they seemed to be doing quite well until the last two words that seemed super challenging. Although he tried his best, his team only managed to guess one of the remaining two. Just like the first team, Nini represented Team Ethereum and they seemed to have a smooth ride until one word had them going in circles until they finally got it. For this game, Team Ethereum solved all their 9 words and consequently won the round.

The Archery game
For the second activity, the Housemates played the game of archery, otherwise known as “The Bull’s Eye’. For this game, arrows, bows and two Patricia boards were provided for each team to simply hit the bull’s eye, which in this case was represented by the Patricia logo in the middle of the boards. Team Ethereum went first and after 10 shots, none of them could hit the Bull's Eye. Team Bitcoin went next and did a lot better. For this round, Team Bitcoin hit the eye twice which was enough to win them that round.

Up next was the crossword puzzle game. For this round, both teams were only able to solve eight words each, therefore, the points are shared.

Find the items
The fourth activity for Patricia's Task relied heavily on the Housemates' time management, concentration and retention skills. Each team nominated a representative to find the hidden items in the room by sticking the provided hank stickers on the items. To simplify this game, the hidden items were written under each banner. Team members were allowed to call out hints or clues to their team representative. Team Bitcoin was a step ahead by finishing first and thus, won the round.

Portraying HANK
For their second Patricia assignment, the Housemates created an original short drama, no longer than five minutes, using the HANK styles shown in the pamphlets included in their Patricia boxes. The story must portray the HANK product and its various features. Team Bitcoin enacted several scenes where individuals were searching for gadgets that meant the most to them while Team Ethereum enacted a wedding ceremony that almost crashed when the wedding rings couldn't be found. 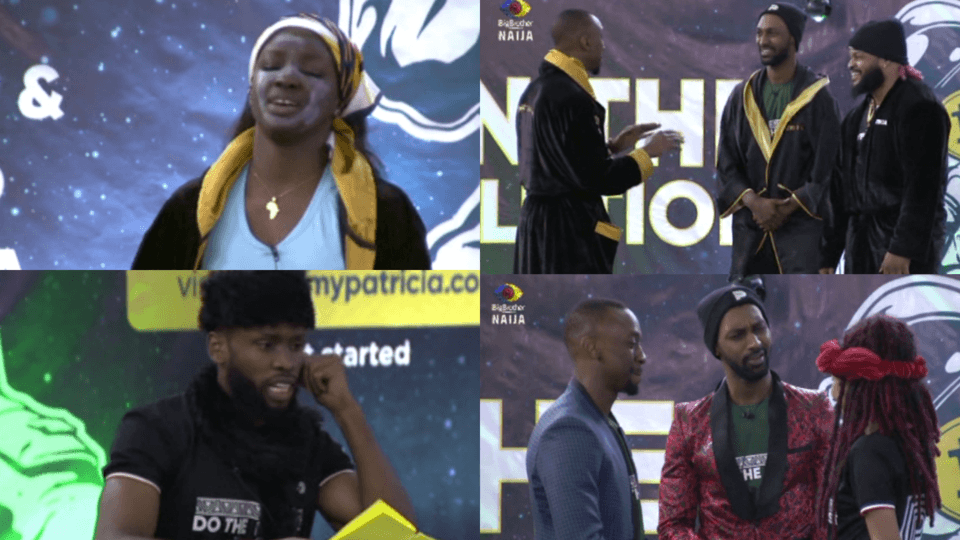 Team Bitcoin claimed all available 20 points in this round for their flawless presentation. Congratulations Cross, Liquorose, Emmanuel, Queen and Saskay. They won five thousand dollars worth of bitcoin to be shared amongst themselves. For being a brilliant umpire, Pere also shares in the spoils of the winning team.

Video
Last round with EmmaRose – BBNaija
Tega confronts Pere about his lack of support for her. Cross apologises to Saskay and EmmaRose explain their relationship one last time.
Video
Tega and Boma come clean – BBNaija
While Tega explains her marital status and the perceived scandal between her and Boma, things between Beatrice and Maria become almost physical.
News
Day 28: Team Grey shines in Patricia Task – BBNaija
Split into four teams, the Housemates came up with catchy jingles, but there could only be one winner.
News
Day 56: Ebuka's table shaking moments – BBNaija
Awkward BBNaija moments we live for thanks to Ebuka's insightful questions.