News
17 September 2021
He came, he saw, he conquered!
Subscribe to watch

He came, he saw, he conquered!

One of the most famous goldfish in all of Naija, Targaryan, has left the building – and not because of the dreaded Eviction chop. 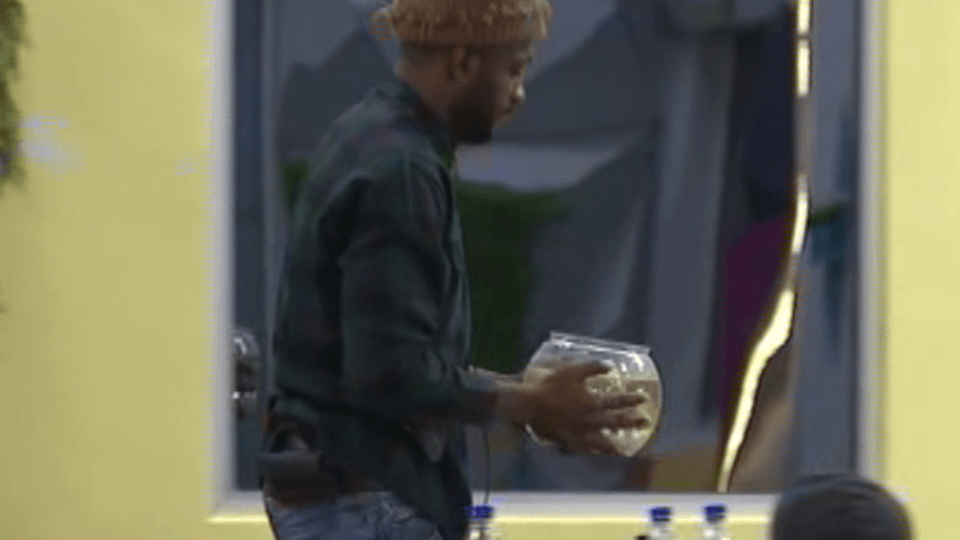 Cross’ goldfish Targaryan, who will be remembered fondly across the lengths and breaths of BBNaija world as one of the spiciest fish of the lot (don’t act like you didn’t see his fishy Diary Session) has missed out on his second Friday Night Jacuzzi Party because he’s dead. :sob: The sad news was relayed by Cross himself soon after tonight’s Task winner announcement.

When Big Brother enquired about what happened to his fish, a devastated Cross broke the sad news. “She’s dead.” 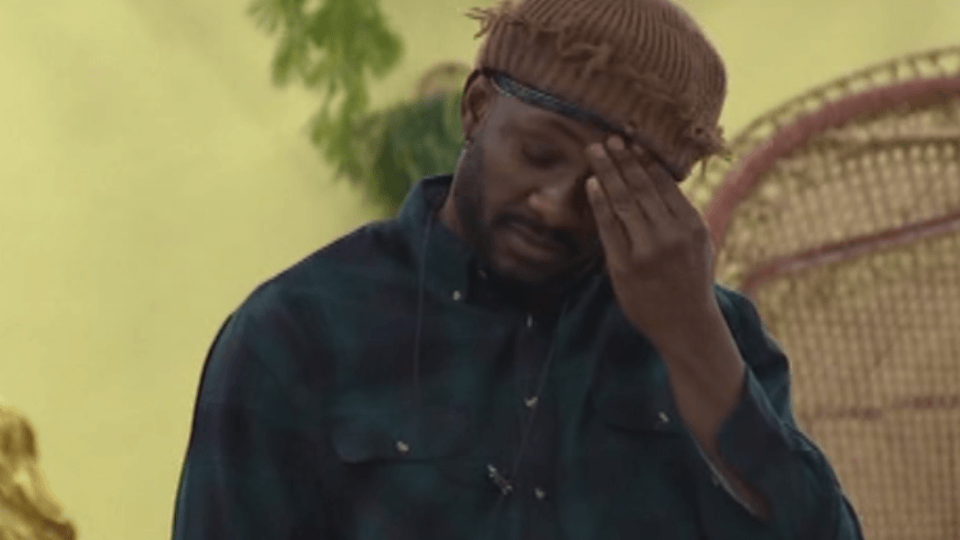 Biggie, was quick to pass his condolences, prompting Cross to go into a silent three-second prayer to help Targaryan along on his journey to fish afterlife. He then picked up the bowl containing the fish, who had been dead for a couple of hours, and headed to the Store Room to say goodbye to his beloved, before being separated forever. 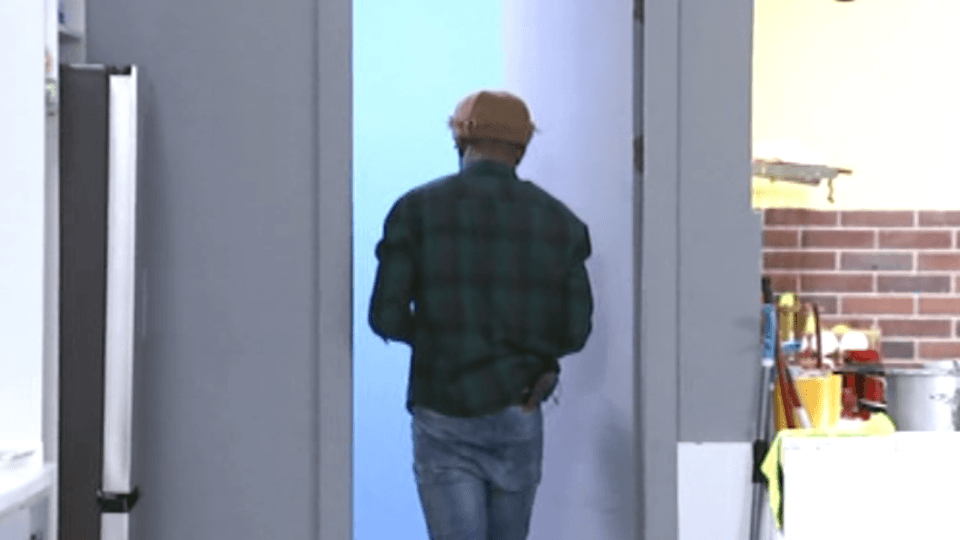 “Hey, buddy. I don’t know if I was a good father, but I did love you. So take care of yourself, ok? Till we meet in heaven.”

Although Targaryan’s death looks like it was from natural causes - and not Whitewalkers, Whitemoney smells a rat – and joked about how Cross probably killed the fish. Later, he passed his condolences and offered to make Cross food to cheer him up. For all its worth, Targaryan himself may have had a premonition of his death if you dissect his Diary Session from last week carefully. :face_with_monocle: Of course, he thought his death would come by way of alcohol poisoning, but still.

Biggie: Hello, Targaryan. Tell Biggie how you feel about your new owner
Targaryan: First of all, this man is ALLERGIC to me, Biggie. That's the first problem. He has been acting all cute and whatnot, trying to take his time to 'bond' with me. Pfft! What a big pretender – and to think he named me after a strong television dynasty. On the bright side, I am relieved my owner will never use me to make fish pepper soup anytime soon. Thank you, allergies! Can't say the same for Obianuju though (Whitemoney's pet).:eyes: She is probably peeing her imaginary fish pants every day.:joy: Anyway, my owner seems like a cool guy. I have noticed his fondness for a pretty lady who hasn't made up her mind. I think it makes him sad sometimes because I overheard him say he wants to marry her and give her kids. I won't lie, I'm a little nervous about the weekend though, Biggie. Apparently, my owner dons a white gown and shades and morphs into something called "Cross da boss," then he drinks like me; like a fish. I am legit scared he might replace the water in my bowl with alcohol.:fearful: Am I safe? Will I not end up in the Jacuzzi this Friday?
Biggie: That would be a bummer, wouldn't it?
Targaryan: Biggie! :sob:

If you ask us, we think Targaryan’s heart probably gave in after Cross’s epic fight with Nini, which left Cross in tears. Watch it below

Ultimately, whatever it is that offed Targaryan does not matter at this point, because the fish is dead. We’re so sorry, T. We wish you had more time in front of the cameras. 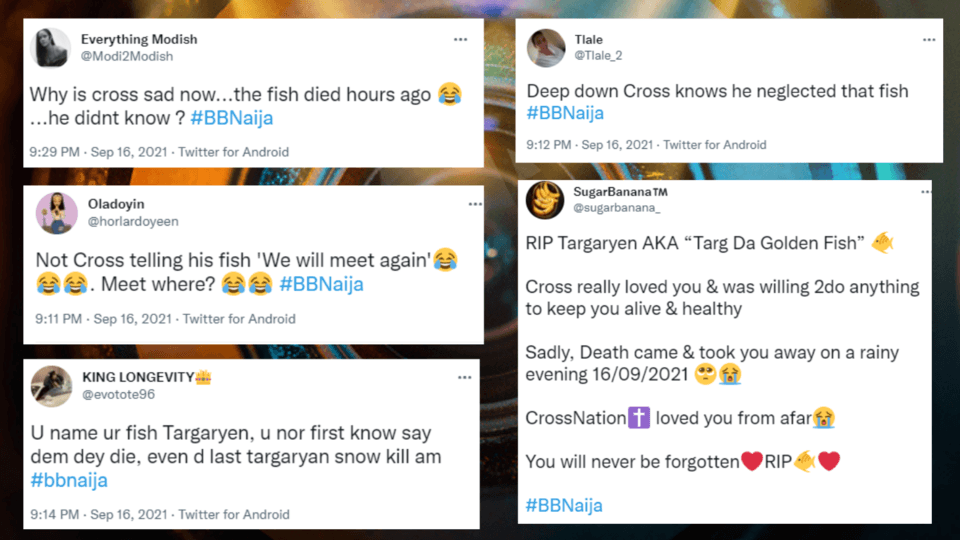 Queen also said goodbye to her fish in the early hours of this morning. It was quite an emotional moment for her as she walked back into the Lounge after the day's workout to find Green dead. She cried her eyes out in the bedroom, unable to hold back the pain. Having grown quite attached to Green, watching her lifeless had deeply affected her. 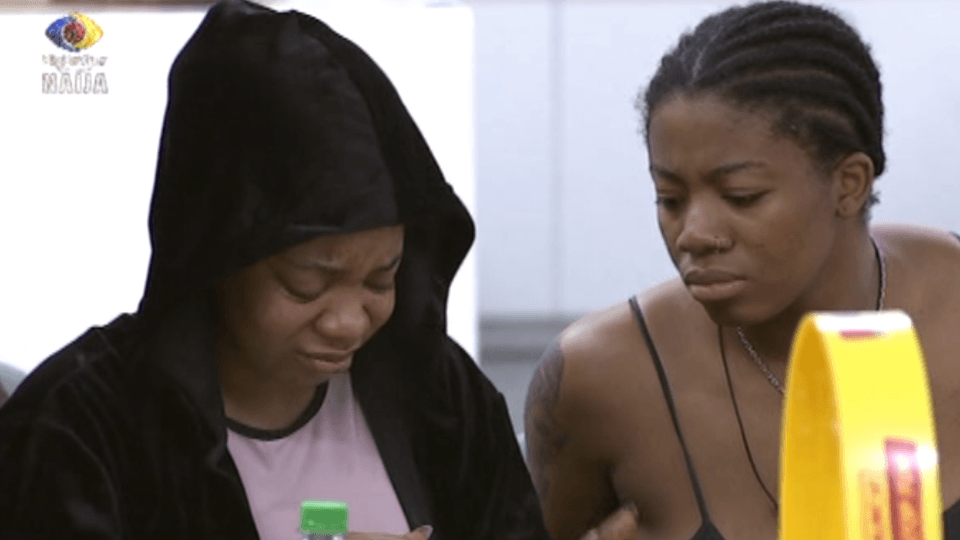 Video
Last round with EmmaRose – BBNaija
Tega confronts Pere about his lack of support for her. Cross apologises to Saskay and EmmaRose explain their relationship one last time.
Video
Tega and Boma come clean – BBNaija
While Tega explains her marital status and the perceived scandal between her and Boma, things between Beatrice and Maria become almost physical.
News
Day 66: The internet reacts to Angel and Pere's reception – BBNaija
Different reactions trail their return, but one had the internet buzzing.
News
Day 55: The promises they made – BBNaija
Did the BBNaija geng deliver their promises?