Day 38: Housemates vibe to the reggae and the blues – BBNaija

News
31 August 2021
A jam session we will not forget in a hurry happened in Biggie's House last night and it is giving some scared of eviction vibes.
Subscribe to watch

According to the legendary vocalist and trumpeter Louis Armstrong, ‘Music is life itself’ and the BBNaija Housemates gave meaning to that sentence last night when Biggie surprised them with a Guitar and a Piano. 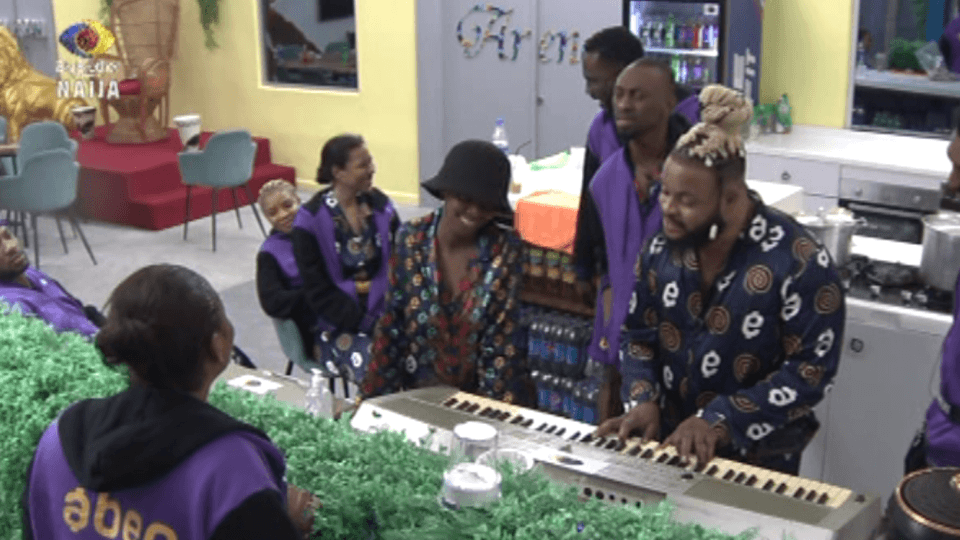 When the Instruments were received, the Housemates took turns to poke and play around with Biggies latest gift. Before you could say ‘jack’, a few Housemates started strumming the guitar and then… it fell into Cross’ hands. Cross not only stroked the guitars (pun unintended), he went on to belt some off-key tunes much to the delight of his fellow Housemates.😭

Following Cross’ lead in off-key glory, Peace took over the vocal space with a charming sound that wowed her fellow Housemates. The House then moved on to the Piano which Whitemoney handled while also serving some manageable vocals. Peace still reigned supreme in this section before Pere came with a more professional sound.

Oh, wait! Did we tell you all most of the songs they sang were composed on the spot? Yes, the ‘Shine Ya Eye’ geng are definitely a talented bunch. At the peak of the jam, Queen pitched into the jam session with her own unique pitch (Pun intended). Our ex HoH Liquorose was also not left out as she gave some of her own vocal input to the jam session. After a while, Michael took over the Piano from Whitemoney and continued the impromptu concert in the House. In all this, Cross was still very prominent giving the Housemates a little off-key vibe here and there. You have to respect that guy's energy mehn.

Surprisingly,  Jaypaul who is a musician outside the House did not partake in the jamboree. Could it be because he feels he doesn’t need to because he has Immunity from the coming Evictions? This leads us to another question — were the remaining Housemates showing out because they are all up for Eviction and were doing anything to be in the faces of viewers?

What a conspiracy right? Well, whatever it is, we are glad they get to entertain us and we hope to see more of this.

Video
Day 4: Level 1 Housemates receive their first task – BBNaija
Level 1 gets down to the business of preparing for their task. Big Brother has asked the Housemates to compose an original song that is to be presented on Friday for their weekly wager.
Video
Day 14: The Urban Street Vibes Party was a movie– BBNaija
The second Level Up Saturday Night Party was one for the books. Level 1 & 2 Housemates were happy to reunite.
News
Day 65: Spicy tea and vibes from the House – BBNaija
We have got two different vibes in the House thanks to the Double Jeopardy Game. One of apprehension and one of happiness.
Video
Day 39: Housemate’s share Eviction Conspiracies – BBNaija
The Housemates have a set of conspiracy theories about the last Evictions and also believe Biggie is going to bring in new Housemates.