Day 35: Matters of the heart and a party – BBNaija

News
28 August 2021
Important conversations were had, and a party was fired up.
Subscribe to watch

Just before the Jacuzzi Party, Jackie B had an important issue to iron out with Michael, again. Apparently, she wasn’t too pleased with what Michael entertains from other ladies especially if he keeps carrying on with her like they are an item in the House. Jackie had already mentioned this in an earlier conversation with Michael, but it seems it warranted another chat, to make sure he understands where she is coming from.

Shortly after the Friday Night Task, they both got into it with Jackie B stating her displeasure with Michael’s habit of entertaining questionable proposals from the opposite sex. She also wasn’t comfortable with how it made her look. According to her, Michael spending time in my bed with her or just around her, in general, gave the notion that they were an item and every time he entertained shots from other ladies, he indirectly made her look stupid, and she didn’t want this. 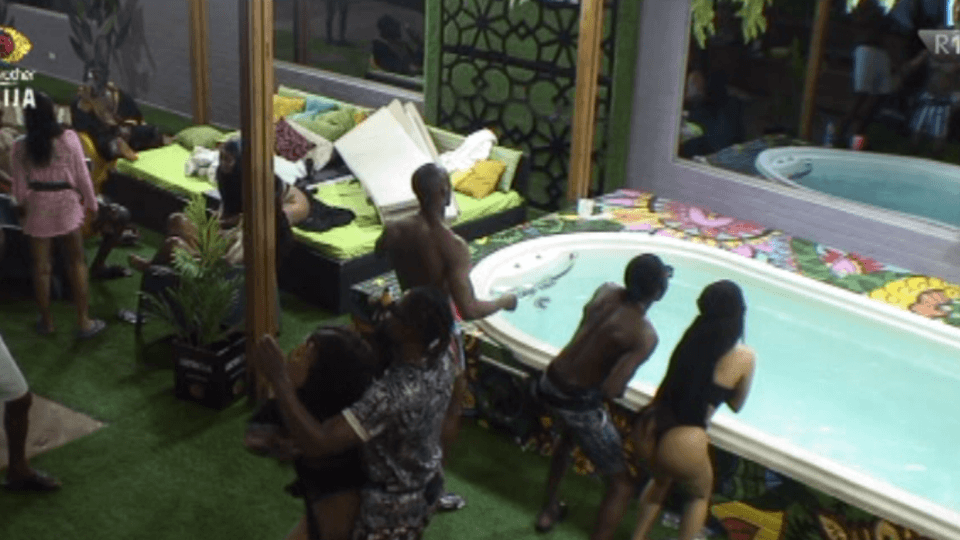 “If you want to play, do, but I don’t want to look stupid,” she said, encouraging him to be free with ladies, but not smear her reputation in the process.  Michael insisted she wasn’t coming to a fair conclusion. He kept on asking her, "What are we?" a question that never really received an answer. It was a back and forth that, at some point, involved Angel as a spectator. Jackie B seems to blush whenever her gaze meets Michael's.

The grill got fired up last night as the Housemates had another fun Jacuzzi Party. The unusual part was that quite a lot of Housemates weren’t getting into the Jacuzzi like they were fond of doing. Turns out, with the new Abeg Naira Menu, they had to pay to get into it. It looked like the Jacuzzi was too rich for their blood as only a few of them got into it while most partied outside. In or out of the Jacuzzi, the Housemates still kept it 100 and had a time of their lives.

As happy as they were, there is still that nagging fear of Eviction. Some of the Nominated Housemates kept to themselves and partied in a laidback manner. We understand what this fear is like and hope they get to rise above their fears.

After the Jacuzzi party, we saw Jackie B and Michael retreating to a corner where they shared an intimate moment after leaving a conversation about the Okro with Queen and Liquorose. Michael was interrogating Jackie B trying to find out who among the guys has tried their luck with her. He doesn't want these guys smiling at him while they have an eye on his lady...

There's only one way to find out what happens next. Stick with us as we drop that premium gist from the BBNaija House.

Video
Day 10: Give me my crown – BBNaija
In a heart to heart conversation with each other, Chichi and Chomzy speak about accepting their tag of being dramatic with their full chest. Will they serve more ginger throughout the season? Let’s wait and see. -- All of your favourite #BBNaija content on the official website, vote, play and watch the freshest content here: https://bit.ly/BBNaijaWebsite DStv: https://bit.ly/3ztNSPW Showmax: https://bit.ly/3PzIro4 Download on Android: https://apple.co/3OtMXmH Download on Apple: https://apple.co/3owIipn Don't miss a single moment, follow #BBNaija on our social platforms: Facebook: https://www.facebook.com/BigBrotherNaija Twitter: https://twitter.com/BBNaija Instagram: https://www.instagram.com/bigbronaija
Video
Day 16: Eloswag and Chomzy have a heart to heart– BBNaija
Eloswag speaks with Chomzy about his affections for her but this did not lead anywhere as Chomzy raises his situationship with Phyna.
News
Day 51: Lost love and matters of the heart – BBNaija
While a #BBNaija Housemate receives succour for losing a loved one to Eviction, another needs to clarify matters of the heart.
News
Day 7: A win, a party and a meltdown - BBNaija
8 days in and the Housemates have experienced a rollercoaster of emotions.