The BBNaija Housemates gathered once again in the Arena for another thrilling night of challenges with Abeg.

Nini was wondering how to make sure the ball doesn’t run away. That’s when we knew that this Task was about to be interesting.

Tonight’s Abeg Task was a football-themed game. Biggie wanted the Housemates to enjoy themselves. At the end of the Task, Biggie promised that there would be no loser, just winners and possibly BIGGER winners.

JMK, Emmanuel, Tega, were not permitted to partake in the games as they needed healing from injuries sustained during previous Tasks.

Biggie asked the Housemates to divide themselves into four teams, each with two ladies and two men. The extra male Housemate who wouldn’t fit into any team would be the referee for the game. This turned out to be Whitemoney.

They were provided two boxes with cards containing team names. They used the lucky dip process where the males picked cards from their box and the females picked from the other box. Whitemoney picked the referee card and he served as Biggie’s assistant for the Game.

The Ultimate Reward was 500 Abeg Naira for each member of the winning team. The runners-up will get a consolation prize of 250 Abeg Naira each. The referee will also get 250 Abeg Naira if Big Brother was impressed with the officiating. 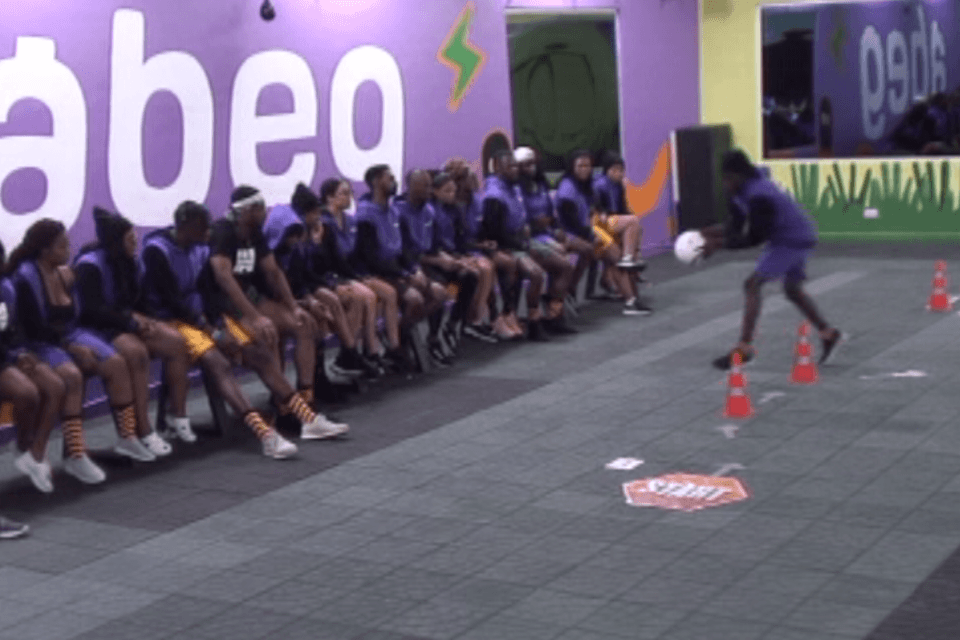 The geng had four simple challenges:

Housemates were expected to dribble the ball in and around the cones to the marked box as fast as possible. If a cone fell, the ball had to be returned to the start position and the challenge had to be restarted. 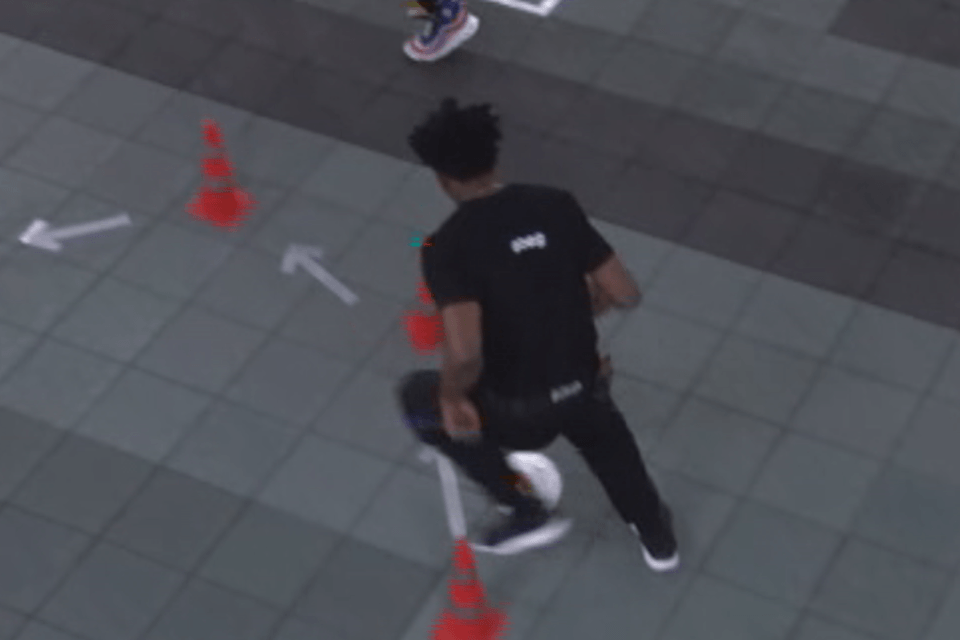 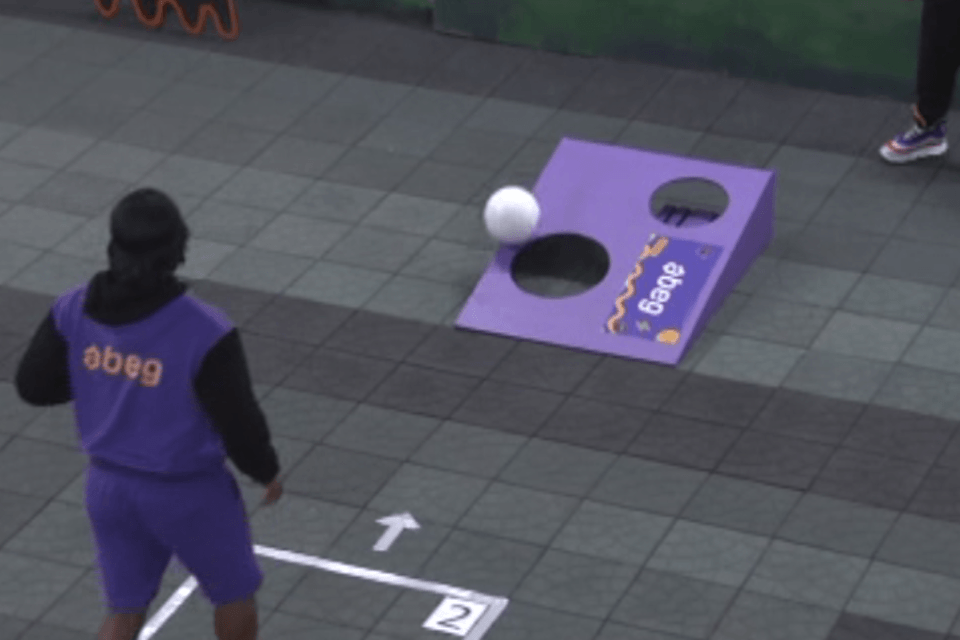 Tactics are very necessary for football and this challenge presented them with the opportunity to show their tactical acumen. There was a single hole to putt the ball and the ball could be placed anywhere as long as it didn’t cross the marked line. They were not allowed to roll or kick the ball from anywhere but outside the marked box. 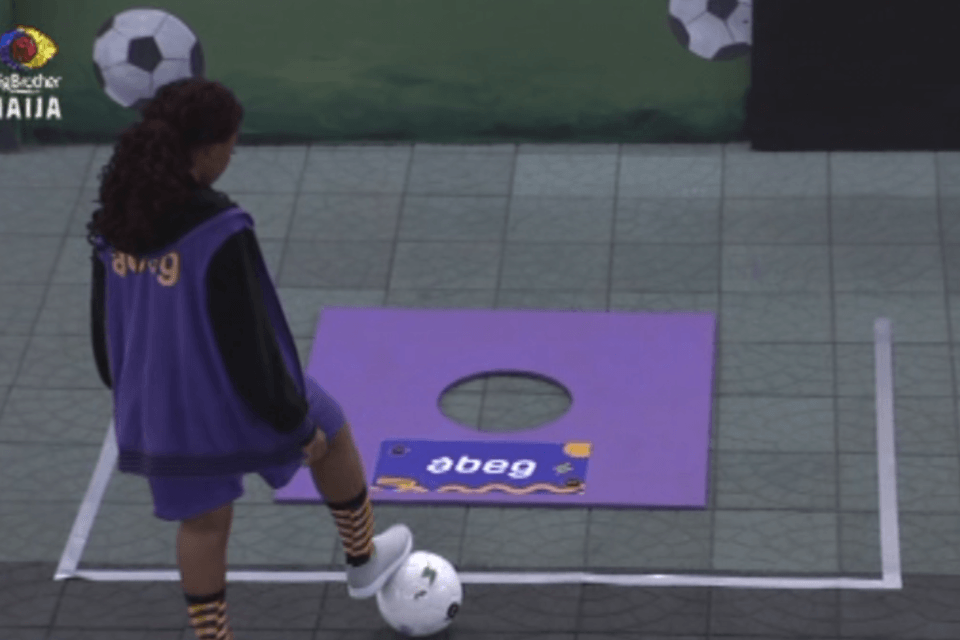 A very common football challenge. They had to score a goal using the back of their heels to hit the ball. The ball had to be placed on the marked arrow. All that was required was a single goal. Each team was expected to nominate a representative for a particular challenge and teams were not allowed to change their reps once the game had started. 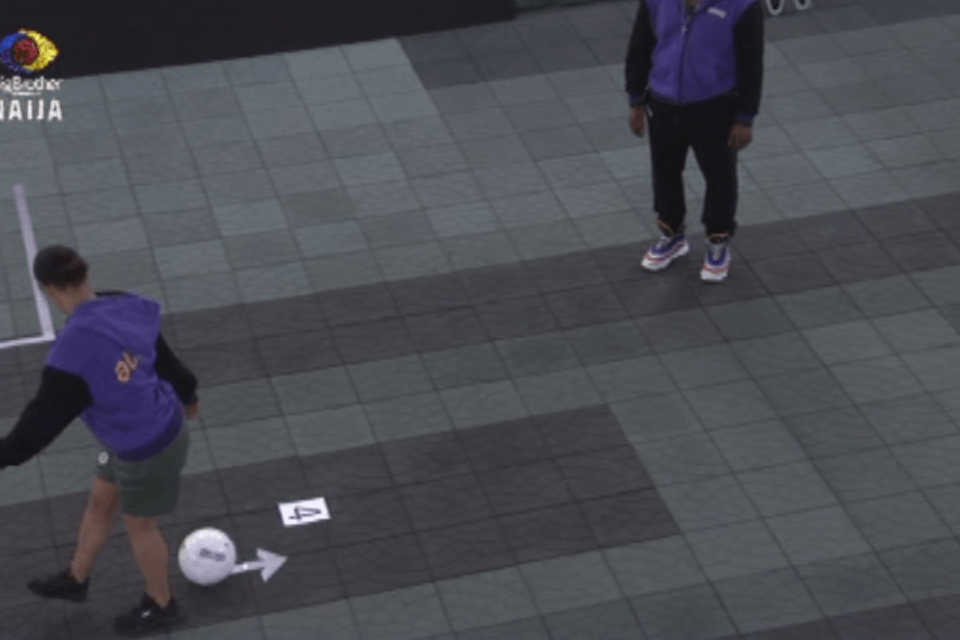 Team One had to play against Team Three and Team two played against Team four. They would play the game like a relay. Once the bell had been rung by the last team member, the clock would stop. No more than one player was allowed on the floor at a time. The Team with the fastest time would win the round.

Team One was started up by Cross, followed by Pere who found the second challenge tricky at first until he scored on the third try. The third game proved to be very difficult for Angel. Who knew that such as simple game could be so complicated? She finally managed to get the ball in the circle and Queen zoomed to the last challenge showing us her truly competitive nature.

Team Three was started up byJaypaul, followed by Saskay and Nini who also went through the most visually frustrating experience with Challenge 3. Nini looked discouraged but eventually finished and  Michael closed off their round. Biggie asked them to rate their performance to which they replied, “Very poor, Big Brother.”

Team two was started by Yousef who dribbled through the cones like a pro. He was followed by Liquorose who got the ball in at the second try and then Sammie finessed the third game in one go. Maria finished off with the back heel and they had completed the Challenges seamlessly.

Team Four had Boma who came through like Didier Drogba with the dribble and Saga had a clean kick in one go. Jackie B also had some issued with too much kicking power for the ball to land in the hole during the third challenge. Peace finished off with the goal and this marked the end of the first round.

Queen didn’t wait for Angel to return during their relay so Team One had five extra seconds added to their time. Despite this, they qualified for the final round. Team two qualified for the final round as well. The two teams had to compete against each other, going through the same football course. Team 2 won and Biggie suggested they could join the Nigerian national team.

News
Pick your favourites: Reunion fashion! – BBNaija
High fashion alert 🚨 Who stole the show?
Video
Last round with EmmaRose – BBNaija
Tega confronts Pere about his lack of support for her. Cross apologises to Saskay and EmmaRose explain their relationship one last time.
News
Day 27: The Abeg Friday Night Task – BBNaija
The Housemates got together to make somebody smile tonight.
News
Day 19: Team Jolli wins first challenge – BBNaija
The intersection of two of your favourite things: Big Brother Naija and football.