News
25 August 2021
Maria is on around the House airing her views on being Nominated.
Subscribe to watch

She soon moved on to engage Cross in a conversation. This time, Maria seemed more concerned about the Strike, her actions and one important discussion that she had with Pere that caused her Strike. “I wasn’t even mad about the Nominations; I saw it coming… I am just mad about everything else,” she said. Apparently, she told Pere something very important that could cost her a lot the night she told him to take off his mic. The full details of what she said remains a mystery to her but from what Pere mentioned, she seemed quite certain that her relationship on the outside might be done.

Do not trust everyone

Earlier, both Boma and Maria had an altercation that resulted in a shouting match when Maria complained that the loud noise he was making with Angel after lights out was making it difficult for her to sleep. That’s behind them now as they both seem to be getting along. In their discussion about the Nominations and dynamics in the House, she warned him not to trust everyone in the House. Using herself as a yardstick, she said, “They are smiling with me every day but they cannot stand me.” She said the Housemates were coming out of their shells and their strategies were being revealed. She warned Boma to act like he wasn’t aware of their schemes but be fully alert. “Act like you are blinded, but don’t be blinded… See it for what it is and be smart,” she said. 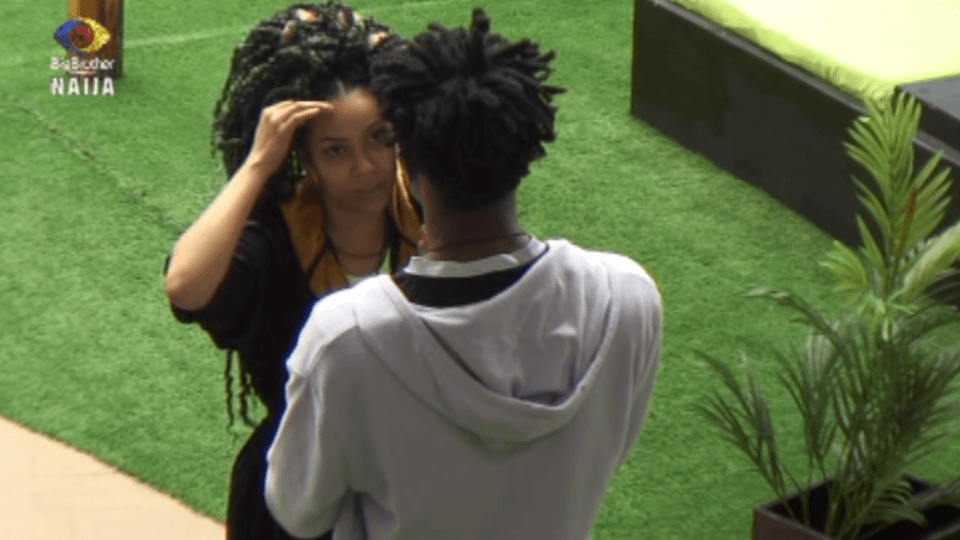 Nomination jitters always has a way of putting people in their feelings and this is one of those instances. Peace who got put up for Nomination and got Saved is still rattled by this action. She still can't seem to fathom that her fellow Housemates would put her up. She understands it's a game now and hopefully, she will adjust or as we say, 'jazz up'.

Video
Tega and Boma come clean – BBNaija
While Tega explains her marital status and the perceived scandal between her and Boma, things between Beatrice and Maria become almost physical.
Video
Angel takes on Maria – BBNaija
A revisit of the comments made by Maria about Angel in the House soon turned into a heated argument between both ladies. While Maria explained the reasons behind her comments, Angel explained why she didn't think the comments came from a good place.
News
Day 32: Housemates overcome obstacles with Dano milk – BBNaija
Your BBNaija faves showed strength as they overcame obstacles in their Task from Dano Milk.
News
Breaking News: Maria and Pere are the Wildcards – BBNaija
Look no further BBNaija Fam, it’s Maria and Pere.