News
07 August 2021
Today was a test of speed and endurance for the Housemates.
Subscribe to watch

It's all about last night’s boot camp night in the #BBNaija House!

The Abeg Task was a tribute to all the gallant men and women in service. The Task was divided into two challenge rounds, which gave the Housemates an opportunity to win the much sought-after Abeg Naira. For the first challenge, tug of war, the Housemates had to play in two groups. Group One included Boma, Saskay, Niyi, Cross, Maria, Arin, Yousef, Sammie, Jackie B, Tega, Princess. The rest of the Housemates made up the second group. 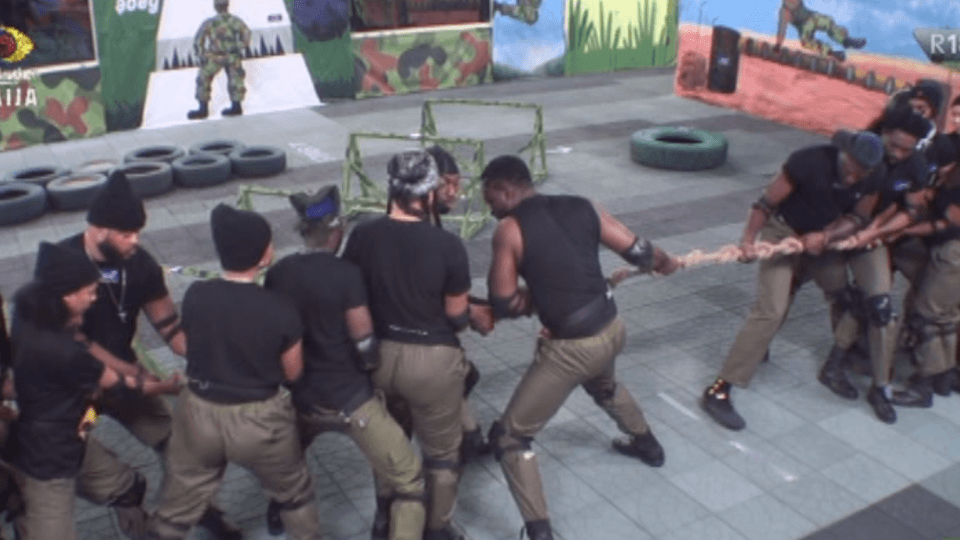 They were given a rope and there was a center mark in the Arena. Each group was to hold on to the opposite end of the rope, drag until at least three Housemates of the opposing group were pulled across the line or alternatively the group runs out of rope. This challenge was designed to run for five minutes. If there was no clear winner by the end of the five minutes, both teams would lose and the Abeg Naira reward would remain with Big Brother. At the sound of the buzzer, both teams scrambled against each other in a bid to be the winning team. After some collective struggle, Group Two won the challenge with each member receiving 100 Abeg Naira each. 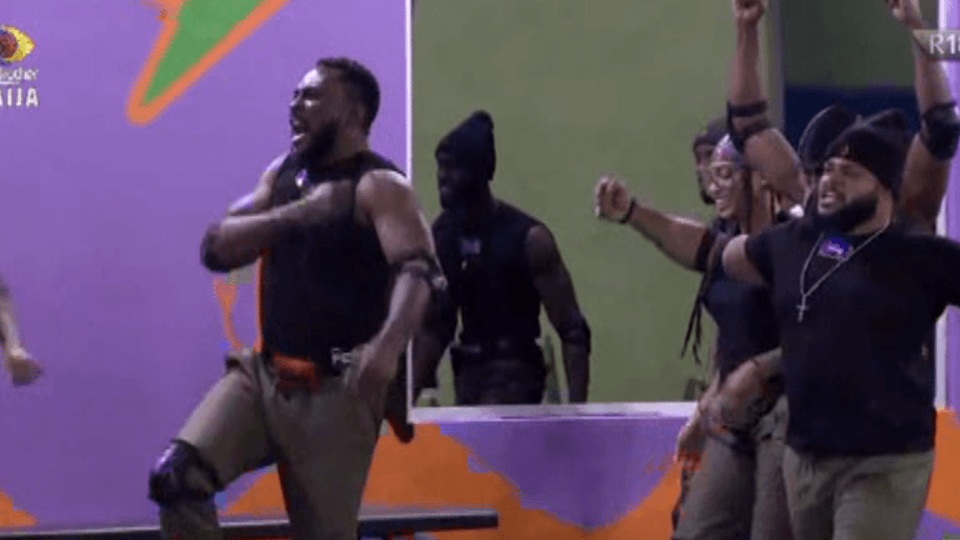 It was a suitable Task for the Housemates who clearly needed to blow off some steam after the hectic day they had. After a short water break, Biggie gave the Shine Ya Eye geng their second challenge. It was an individual course which was supposed to take each Housemate two minutes maximum to complete. The round included five challenges that had to be completed in the obstacle course.

The obstacle course was as follows:

Challenge 1: Jump in and out of the tyres.

Challenge 2: Climb up and down the hill.

Challenge 3: Crawl under the ropes to get to the other side.

Challenge 4: Go over each hurdle to reach the other side.

Challenge 5: Drag the large tyre from the first marked spot to the second. Ensure that the second marked spot is visible through the inner circle of the tyre.

Upon completion of the firth challenge, each Housemate had to proceed to the end position, raise their arms up and say, “Abeg, I have finished”. There would be only two winners: a male and a female Housemate. Those with the fastest time were to be rewarded with 500 Abeg Naira each. The Housemates gave this challenge their best with some showing off their true athletic skills. The current HoH, Boma swiftly went through the course and Saskay followed suit as she quickly went through the challenge with ease showing us her strength.

Emmanuel, Niyi, Cross,Yousef moved fast and made it look easy. Maria gave it her best, dropping her beanie halfway through the obstacle course and struggled a little with the tyre. Arin, also fought with the tyre. It looked like a true test of athletic abilities. Sammie was quick with the routine, completing it in record time. Jackie B had a false start and quickly recovered and finessed the tyre. Tega showed off her abilities and she at last shouted the required “Abeg I’m finished” at the end of the course. Princess started fast but slowed down halfway through the course. Jaypaul looked light and literally made it look easy as if he has created for the challenge. Angel nearly fell in the beginning, but she pulled up her socks towards the end after she barely jumped over the hurdles.

Yerins looked very ready, but Dr. Polymath showed us that his strength lies in his knowledge. Beatrice looked like she’s built for battle as she moved with ease showing us sportwomanship. Nini went through the course without giving up and Saga, the resident coach, owned the course to the end. Peace slayed the challenge with her long hairstyle like a pro, while Whitemoney went through it in a much different fashion than we have seen during morning workouts. Liquorose was a ball of energy as usual and Pere showed us that he is truly from the military himself and swished through it. The Housemates, however, did not follow the rules and Big Brother reprimanded them for this. In the end, Sammie and Liquorose were the winners both winning 500 Abeg Naira each. The sun is finally shining on Sammie who has been complaining about his empty wallet. 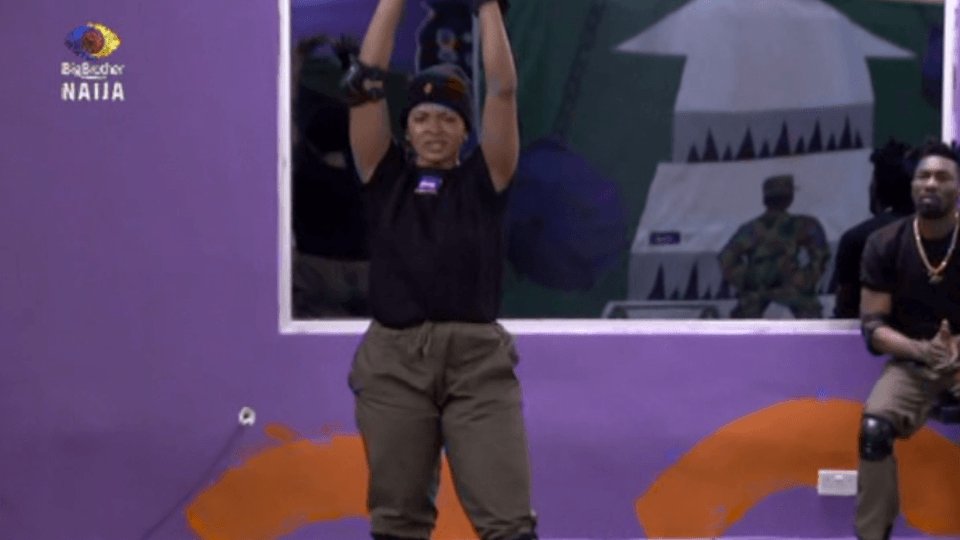 Biggie closed off by complementing Sammie and Liquorose and suggesting they might need to join the army. As a reward, all Housemates were told they can enjoy a Jacuzzi Party, as the garden area was now open for them. The BB Token challenge winners were also announced after the Abeg Task. Team Eagle consisting of Saga, Emmanuel, Jackie B, Saskay, Niyi, Liquorose and Cross won the first BB Token Challenge of the Season. 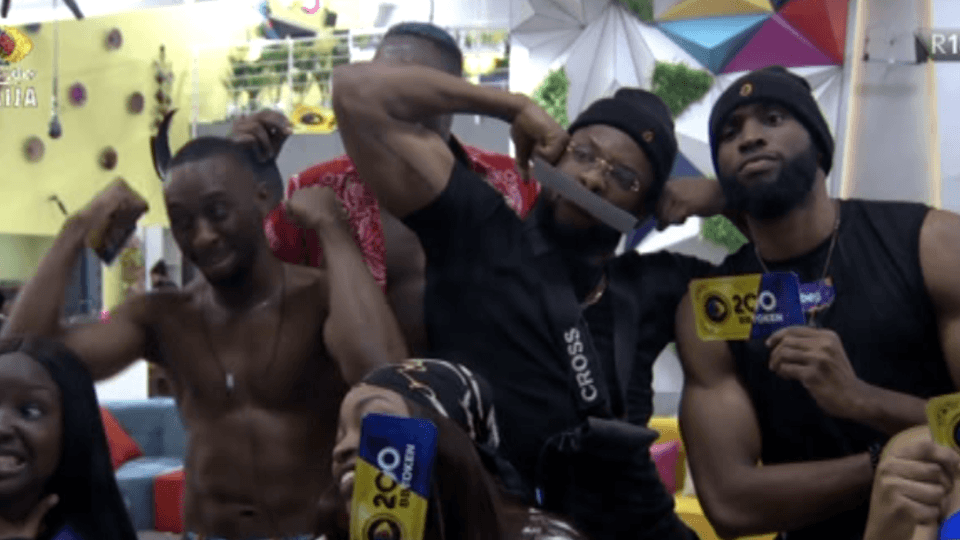 News
Big Brother Naija Returns For Seventh Season
Don’t sleep on fame as the online auditions open.
Video
Day 67: Housemates gist about Nigerian talent – BBNaija
In their chat about cars, Cross and Pere agree that cars that are built for Nigeria have better longevity and show the talent in the country.
News
Day 14: The morning after – BBNaija
It is the morning after a lit Jacuzzi party and fierce clashes.
News
Day 8: The first Saturday Night Party – BBNaija
After Friday’s performance, this is the event we had been waiting for.