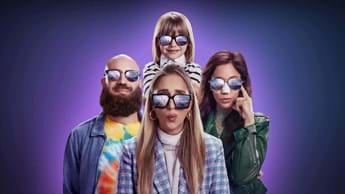 Things are looking bleak for content creator, Tali (played by Julia Anastasopoulos) at the start of Showmax’s Original comedy series, Tali’s Joburg Diary. With her finances in arrears, she can no longer afford her lavish lifestyle. As a result, she moves out of her Cape Town mansion and back to Johannesburg, with her parents.

Along with her husband, Darren (Anton Taylor) and their son, Tali is travelling economy class and she doesn’t like any of it. She’s also having a hard time adjusting to her new normal, without the shopping sprees and expensive vacations.

As if her problems aren’t enough already, Tali sets out to get her son into a premium preschool when she lands in Joburg. Brace yourself for the same Tali, in a very different city, with a very different bank balance.

DStv Premium subscribers get Showmax at no additional cost and DStv Compact Plus, as well as Compact customers pay only R49pm for the standard plan; that’s 50% off.