Tuck into Gordon Ramsay: Uncharted Showdown and more of DStv’s most challenging cooking shows this November. 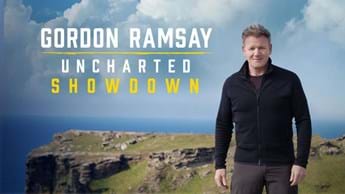 Picture this: It’s the big holiday evening. There’s no parking left, and you’ve been sent to pick up a handful of missing ingredients for a dish for 20 guests . . . which the cook has already started working on – that’s a stress test! Join chef, Gordon Ramsay is going further in his own quest to gather fresh ingredients in Gordon Ramsay: Uncharted Showdown. Only he won’t be elbowing a pensioner out of the way to snatch the last roast chicken.

As Gordon prepares for a Showdown with three former protégé, he’ll be kayaking out to get lobster, milking a buffalo to make his own cheese, and dangling from a helicopter . . . for reasons. Gordon is the ultimate one-upper, but he’ll have stiff competition this November as we unleash some Extreme Cuisine.

Watch Gordon Ramsay Uncharted Showdown Season 1 from Wednesday, 9 November at 21:00 on National Geographic (DStv Channel 181) and on Catch Up.

Three episodes, three extreme cooking challenges as Gordon takes on his former apprentices Paul Ainsworth and Matt Waldron, as well as his daughter Tilly. At stake: his magnificent ego if he loses to these kids!

Watch Gordon Ramsay Uncharted Showdown Season 1 from Wednesday, 9 November at 21:00 on National Geographic (DStv Channel 181) and on Catch Up

South Africa’s favourite special experiment returns as three pairs of braai buddies, who’ve never crossed paths before, compete to win points from one another for best braais, salads, menus and presentation. Look out for episode two, which will challenge the braai teams with an alternative technique that sees them crouched down to the ground.

US Navy veteran and barbecue pitmaster, “Big” Moe Cason goes all out to cook the best ever versions of local specialties around the world. In South Carolina, Moe risks his fingers to go crabbing, he hunts alligators in the Louisiana bayou, and in the Bahamas, he dives for conches and chases crabs for his pot.

Watch World Of Flavor With Big Moe Cason Season 1 from Wednesday, 30 November at 21:00 on National Geographic (DStv Channel 181) and on Catch Up

Cake decorating and sugar work are delicate, finicky processes and there’s nothing quite like the panic of trying to create a work of art as the clock ticks down. To top it all off, you’re up against other cake artists, with judges, Shinmin Li and Aarti Sequeira watching your every move.

You thought your family could throw down with who makes the best food at the big holiday get together? Step aside. This season’s 12 bakers will try to impress Nancy Fuller, Duff Goldman and Carla Hall as host Jesse Palmer dishes out those impossible challenges (you’re going to see those bakers run!).

Watch Holiday Baking Championship Season 8 from Friday, 11 November at 19:55 on The Food Network (DStv Channel 175) and on Catch Up