Nozibele Qamanga-Mayaba fights the sickness of silence and fear in the new HONEY series Yes, I Have HIV. 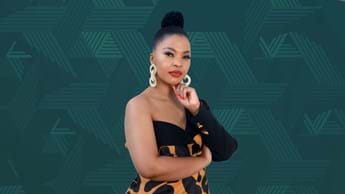 When activist Nozibele “Nozi” Qamngana-Mayaba first agreed to host HONEY’s (DStv Channel 173) brand-new reality series, Yes, I Have HIV, she thought she’d just be chatting to people and getting their stories for the camera. However, she couldn’t hold back...“Because of my own journey, of having to navigate disclosing [my HIV status] to my family and friends, I related so much to the stories that there was no other choice,” she admits. “I became heavily involved from a research perspective, not just understanding the stories, but also suggesting if there's any elements of the story that are missing.”

Nozi’s own missing pieces held her back from telling her loving and supportive family that she had contracted HIV for six years. She was just 22 years old at the time, and the isolation of keeping that to herself was crushing. “I had to take this journey on my own. When I look back, I wish I trusted my family and friends to be there for me. It was really too much, having to pretend that everything is fine. It was lonely and I didn’t have to go through that alone.”

Nozi tells us how she and the Yes, I Have HIV counsellors are saving others from that loneliness – and about what really keeps us silent.

It’s not just one thing

There was nothing simple about Nozi’s silence. “As I interacted with each guest, some of the family members would ask: ‘Why didn't you trust me?’ I would respond: ‘Sometimes, it's not even about you; it is about the state of mind that this person was in’. We’re not in the position to risk being rejected by our own families. There's a lot we go through after a person has been diagnosed.”

Aside from having to process what HIV will mean for their lives, there’s the fact that for many people on the show, this isn’t their only secret. “In some cases, we found out that although the person that came to the show was under the impression that their HIV status was the biggest secret, there is more to unpack with these stories. There was an individual who wanted to disclose [her status] to her two sisters. As she revealed the status, there were so many other things that she started to uncover as well. There was fact that she was raped twice, and she had been carrying that for many years.”

There is an in-house counsellor, who assisted the guests, and their loved ones navigate their reactions. In each episode, emotions ran high during filming. “I don’t want to sound like I expected everything to be fine. I was scared, myself,” says Nozi, before adding “Generally, the reaction was positive. There was confusion and plenty of questions too. We’re dealing with real stories and real people, so that shock was there.”

HONEY (DStv Channel 173) is available on DStv Premium, Compact Plus, Compact, Family and Access. To upgrade your existing package, click here. Or if you'd like to Get DStv, find a service that suits your needs here.