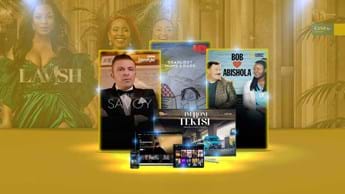 DStv Compact knows you deserve the very best, and we’re rolling out the red carpet with a decadent new local drama series, Lavish, on Mzansi Magic (DStv Channel 161) this November. If watching these champagne socialites feeds your inner snob, drop in at The Savoy for the last word in absurdly luxurious service – along with an insider peek at how the staff keep things moving.

You’ll also get exclusive and VIP access to one of South Africa’s high-powered organisations as Mzansi Magic’s reality series Imboni Yama Tekisi takes you on a wild ride through our taxi industry, through the eyes of four big bosses – including TikTok breakout star Nthabiseng Keroane. If you have an appetite for danger, get ready to meet chilling killers in Deadliest Mums & Dads.

PS: You get to see so much more on DStv with Compact. Check out our other monthly highlights packages for news about shows like Wrongfully Diagnosed and Gordon Ramsay Uncharted Showdown. If you can’t resist a red carpet, The Soul Train Awards 2022 are coming to BET (DStv Channel 129) on Monday, 28 November, and the MTV European Music Awards 2022 are on Sunday, 13 November on MTV (DStv Channel 130).

From The Wife, to Isibaya, we’re fascinated by the drama inside South Africa’s taxi industries. This reality series dares to climb into the front seat for the truth, as we meet real-life taxi bosses such as widow and TikTok sensation, and KZN-based twin brothers. We’ll meet their families and their drivers. We’ll also go inside their businesses to get to grips with some radically different approaches to the business, their rivals, and their efforts to adapt to the future. They’ll also reveal the deadly dangerous rules they must live by to avoid setting off a taxi war.

Trophy wife Zozi and her two closest friends – posh, politically connected Katlego and the fabulous Nomzamo – are forced even closer when they have to lie to protect one another, stay out of jail, and keep their claws on all those marvellous millions. From the outside they might seem perfect, but Zozi’s little sister, detective Mpumi, can already see the cracks... When Zozi misinterprets a situation, a body hits the floor, and it looks like the season’s hottest accessory is an accessory to murder.

The eight-episode British true-crime series is narrated by Milo Twomey and looks at why these parents kill. Cases include the murder of teenager Shafilea Ahmed, Lee Ford’s murder of his wife Lesley and all four of his stepchildren, and the murder of eight-year-old Ayesha Ali. We also find out who decapitated three-year-old Erica Green, what happened to little Bianca Jones, and why a wife murdered her husband and two sons.

One of TV’s most romantic comedy series is back. Bob is shopping for an engagement ring but Abishola has an even tougher mission ahead of her if she wants to divorce her husband. She’ll also look towards getting blessings on her union with Bob – one of the major storylines for the season.

After a massive investment in renovation, London’s Savoy Hotel opens its doors again for the first time since the pandemic began. The Royal Suite has been designed by Gucci, Gordon Ramsay is opening his new restaurant, and all the brides, who had to put off their posh weddings are stampeding. The new owner is jetting in and an inspector is on the way to determine whether the Savoy will keep its five-star status. Needless to say, staff terror levels are at an all-time high.

Also on Compact this November

A nightly spectacular on DStv Premium and Compact Plus this November

Check out the other highlights packages for more on these shows, which you will also be able to watch this November…