What to Watch on BoxOffice | October Highlights | DStv 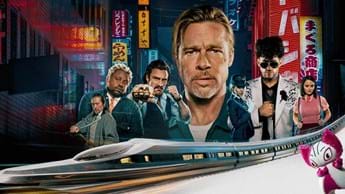 Raise your hands for the champion! DStv BoxOffice knocks boredom right out of the ring with October movies such as epic action comedy Bullet Train, the Orphan prequel that’ll have you scratching your heads over its special effects, and even Krypto.

Relationship movies pull on the gloves, too. Home invasion horror, Barbarians and romantic drama The Swearing Jar, have some unexpected punches up their sleeve. You get ringside seats to all the action with BoxOffice.

To square up with the movies, just cue a movie on BoxOffice and stream it directly through the DStv platform, using your DStv Explora or Explora Ultra. Instead of braving the cold, the crowds, the popcorn prices, the parking perils, and the long road home, you could bask in the warm glow of fresh big-screen movies right now, on your own TV.

Read on for this month’s highlights and your quick and easier-than-ever guide making every night Movie Night with DStv BoxOffice… October’s going to knock you out.

The one to book!

10 Assassins, one high speed train, and a briefcase everyone wants! All aboard for action comedy as Ladybug (Brad Pitt), The Prince (Joey King), Lemon (Brian Tyree Henry), Tangerine (Aaron Taylor-Johnson), Wolf (Bad Bunny), Hornet (Zazie Beetz) settle some scores they’ve built up with each other over the years. They hire guns and go all out to slaughter the competition during the high-speed, non-stop journey from Tokyo to Kyoto. First one to step off the train, still breathing and holding the briefcase wins.

On BoxOffice from Sunday, 16 October

Superman’s dog Krypto has been a part of his story since he first appeared in Adventure Comics #210 in 1955. In this animated adventure comedy, a group of shelter pets gain superpowers when they’re exposed to orange Kryptonite from the LexCorp labs. This results in a super-strong boxer, a size-changing pig, a super-speedy turtle, and a squirrel with electrical powers. They team up to help Krypto to defeat Lulu, the megalomaniac, flying, telekinetic guinea pig, after she vows to destroy both the Justice League and her creator, Lex Luthor. The film features the voices of Dwayne Johnson, John Krasinski and Kevin Hart.

On BoxOffice from Friday, 7 October

In this eerily atmospheric home invasion horror story, young couple Adam (Ewan Rheon) and Eva (Catalina Sandino Moreno), have been renting the Gateway country estate from its owner, Lucas (Tom Cullen) for a while. Lucas drives down to Gateway with his girlfriend Chloe (Inès Spiridonov) when they’re invited to a dinner party to celebrate Adam’s birthday. In a twist, a secret affair is revealed. Just as Lucas and Adam descend into outright brawling, there’s a knock at the door. Invaders in animal masks have arrived to take everyone hostage, and they have a bone to pick with Lucas.

On BoxOffice from Saturday, 8 October

This psychological horror film is a prequel to the darkly and funny horror film, Orphan (2009). 10-year-old adopted orphan, Esther (Isabelle Fuhrman), turned out to be an adult serial killer. In this film, Leena escapes a psychiatric institution in Estonia and goes to the police, claiming to be a missing American girl named Esther. Soon, Esther’s mom, Tricia (Julia Stiles) unmasks the truth, and a deadly battle takes place.

On BoxOffice from Friday, 28 October

Widowed father Dr Nate Samuels (Idris Elba) takes his teenage daughters Mae (Iyana Halley) and Norah (Leah Sava Jeffries) to South Africa for a safari. The nature experience is at the Mopani reserve, where Nate’s old friend, biologist Marti Battles (Sharlto Copeley) is now a manager. Nate is hoping to take the girls to the village where their mother grew up. While they are in the reserve’s restricted area, they run afoul of a rogue lion, who’s wiped out an entire Tsonga community, and a nail biting fight for survival begins. The movie was shot in Limpopo, the Northern Cape and Cape Town.

On BoxOffice from Monday, 31 October

It’s a romantic musical drama, which follows pregnant music teacher Carey (Adelaide Clemens). She lovingly prepares to stage a musical concert to celebrate her love for her husband, Simon (Patrick J Adams). While she’s rehearsing the piece, she finds herself falling in love with the guitarist who’s helping her, Owen (Douglas Smith). Whoops, looks like she’ll have to pop some cash in the swearing jar that she and Simon have started to help them prepare for being good parents.

On BoxOffice from Thursday, 20 October

It’s the simplified and enhanced BoxOffice – online movie rentals for both DStv subscribers and non-DStv customers.

Get the best with BoxOffice

Line up your snacks, and claim your space and silence, because Movie Night is just a few taps away online. With BoxOffice on now.DStv.com, you’ll find more movies, available for longer, and you can punch your ticket and rent a movie with the tap of a button. Then sit back and stream it.

Your BoxOffice movie will be yours to enjoy for 48 hours, so if one of life’s little loadshedding moments happens, you can come right back to it.

You don’t even need to be an active DStv subscriber to enjoy a night at the BoxOffice. Simply register to use BoxOffice online, create your online profile, link up your payment options and you’ll be ready to go.

It does pay to subscribe to DStv, though. Not only do DStv Premium, Compact Plus and Compact viewers pay less than the usual R40 ticket fee per movie, but, thanks to DStv’s free Rewards Programme (which you can manage using the MyDStv App), you could enjoy cool discounts and free movies via BoxOffice.

Also coming to BoxOffice this October