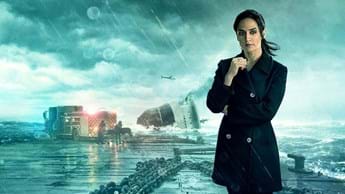 In drama series Departure, Season 3 ferry boat The Queen Of The Narrows goes down in Iceberg Alley off the coast of Newfoundland, Canada, leaving 500 passengers scrambling for lifeboats. In their quest for the truth about why it sank, investigator Kendra Malley (Archie Panjabi) and her team, including Dominic Hayes (Kris Holden-Ried) must interview the passengers and crew, review the technical data and consult experts like naval Captain Banks (Eric McCormack), who’s the first to arrive at the scene to rescue survivors.

“Titanic went down just off of this coast. The seas are wild here. They can swell up to 40-foot (12m) waves and crash over boats. So, when our boat goes down, our investigators have to figure out why. The one clue that they have is that there’s a big bang right before the boat starts to list (tilt to the side). That could be mechanical; it could be a boiler blowing; it could be a bomb; it could be an iceberg that hit,” reveals series Director TJ Scott (Orphan Black and Star Trek: Discovery). “Part of what's really fun about our show is that it's planes, trains, automobiles, boats – all of us are going to go on these things. I like to put the audience into the show and go: ‘What if I had been on that boat?’”

Like Kendra, we consulted an expert, TJ, about filming the season…

Ferry to the other side

A ferry sinking is a mass death event and you were shooting in Petty Harbour, which is a really small town. Is there going to be a logistical problem with that?

We don't quite deal with the fact that they couldn't handle the overflow of it (hundreds of bodies of drowning victims). We changed the name to Harbour Cove, but when you look at the maps (on screen) it’s Petty Harbour that we used. It really would be the first response place. But once people are ashore, they can be transported 25 minutes away to St John's. When boats do go down off here, what happens? They said to me, “Those little fishing boats go out and try to save their friends.” I've been out in some of those boats in even not-horrible seas. Water just comes right over the deck and you think you're going down. The fishermen are like, “Oh, that’s just what happens, boy! Get used to the sea.”

What was the most challenging aspect during filming this season?

Really trying to figure out how to be at sea with a film crew. It's not easy to say, “We're just going to go out on a ferry boat and shoot a show – and guess what? The ferry boat capsizes and lots of people drown.” So the logistics were figuring out what we would shoot in-studio, what we would build, what we were allowed to actually film on a ferry boat, and then actually securing a ferry boat that would let a film crew go out on it. Then we couldn't get the ferry boat that we wanted, because it went into dry dock. So (luckily) I could spend hours on it, looking through it, getting underneath it, figuring out how a boat works. I was able to crawl underneath, look at the propeller. (On screen) we really go through it in ways that people can't. Little back corridors, time on the bridge; actually seeing how a huge boat like this works. The engine room in a ferry is massive. It just goes on and on and on – it's not an engine, it's rooms of engines. It’s going to be a unique visual for people.

How were scenes of the sunken ferry filmed?

We built a massive scale model, almost 20-feet (6m) long to exact detail. And we shot it with underwater drones. It’s pretty incredible. We have lots of scenes of it going down and water crashing in on people, and a few scenes where it's on the bottom. We really figured out how to build stuff well this season, to take you on the adventure as a passenger. But with a 20-foot (6m) scale model, how do you get that from Toronto to an island of Newfoundland? It’s in the middle of nowhere, it's a little rock. If you’ve got to get stuff there, either you fly it or by ferry – and that's how you get everything here. So super tricky logistics.

When you were researching ferry sinkings, what caught your attention?

One thing that I really noticed when we went on a few ferries is that it's almost impossible to figure out how to get into those safety pods, or how to deploy the rafts, unless you're a crew member and have been taught it. Four of us sat around one day – pretty smart people! – looking at this thing going, “We have no idea how to get into this safety raft and get it out to sea”. So when you hear that people died in boat accidents, I think a lot of it is they just didn't know how to get to safety. When you're on a plane they tell you as soon as you get on! You just get on the boat and hope for the best.

Universal TV (DStv Channel 117) is available on DStv Premium, Compact Plus, Compact, and Family. To upgrade your existing package, click here. Or if you'd like to Get DStv, find a service that suits your needs here.

Card Link
Back to News
International 01 October 2022
Ready for Departure!